© 2020 Autosport.  All rights reserved.
Previous / Rossi: Form would have convinced me to stay for 2021
Next / Tearoff that ended Miller’s race up for auction

Andrea Dovizioso says the "strange" Friday practices for the MotoGP Catalan Grand Prix can't be read into too deeply when judging Ducati's performance.

No factory Ducati rider was within eight tenths of Friday pacesetter Franco Morbidelli on the combined times, with the top GP20 runner Jack Miller 12th on the Pramac bike.

Dovizioso was just over a second off the pace in 15th, with Misano podium finisher Francesco Bagnaia a further 0.5 seconds adrift in 20th. Danilo Petrucci was 2.2s down in last.

But none of the GP20 runners opted for fresh soft rubber at the end of FP2, while Avintia's Johann Zarco on the 2019 Ducati did and ended the day second.

Low grip at the Catalunya circuit allied with high winds and a big tyre drop-off during Friday's two 45-minute sessions caused a number of riders to struggle, prompting Dovizioso to label Friday "a bit of a strange day".

"I don't think we have to take today to know exactly how Sunday will be, because everybody came from Misano and the difference in the grip is the biggest you can find," he said.

"So, first you have to adapt. Second, in the afternoon there was a crazy wind.

"To be fast you had to take a lot of risk and I didn't have that feeling to do that and I think tomorrow the conditions will be better to be faster. So, I don't think it wasn't too important. 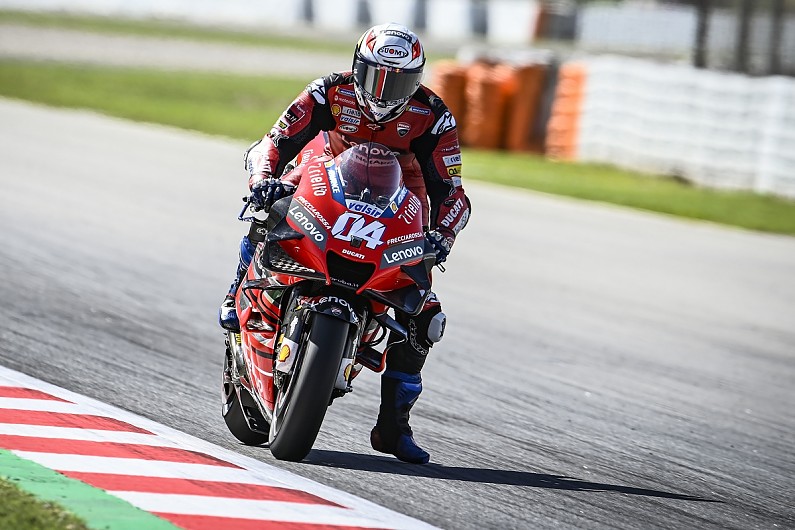 "It was a bit strange. Me and Pecco [Bagnaia] did the same strategy, but completely different to the other competitors about the rear tyres.

"So, we don't know our speed because in the morning we used the tyre in a different way and also the afternoon.

"It was a strange day about the winds and the tyres. So, I think nobody was able to work really in the afternoon.

"We tried a set-up but in the second exit, the bike was uncontrollable and you can't work on the details like that.

"And also about the tyre it was very difficult, I think everybody felt the big drop off with the rear tyre. But I think tomorrow the conditions will be normal."

Petrucci says he "expected" to struggle in the afternoon session and not running the soft tyre was a conscious decision to preserve his allocation for Saturday as it's "the only tyre that's working".

"For sure it was difficult to ride, but we expected to struggle in the afternoon because we tried to not put any soft tyre," he said.

"We know it's the only tyre that's working at the moment because of this temperature. But for sure we had to understand which direction to find some grip and some stability.

"We tried first to take some risk and find some grip, but the wind was too strong and the bike was very unstable. So, we went in another direction, but with a medium used tyre it was difficult to manage.

"At the end I was not so worried because the only tyre working is the soft and I didn't use one today."

Share this article on Facebook Twitter LinkedIn Email
Previous / Rossi: Form would have convinced me to stay for 2021
Next / Tearoff that ended Miller’s race up for auction
© 2020 Autosport