Petronas SRT's Franco Morbidelli topped the second practice for the MotoGP Catalan Grand Prix despite an early crash, with Avintia's Johann Zarco also recovering from a crash to finish second.

Morbidelli took control of the timesheets in the opening five minutes of this afternoon's session, setting the initial pace at a 1m41.143s on his 'A-spec' SRT Yamaha.

The San Marino GP race winner improved to a 1m40.672s on his follow-up tour, with his next effort of 1m40.573s standing as the benchmark for much of the session.

Morbidelli carried on his run on the medium rear tyre, though it was halted with around 25 minutes of the session left to run after sliding off at the Turn 10 left-hander.

The high wind caused havoc in the preceding Moto3 FP2, and several MotoGP riders were caught out during the first 20 minutes of the session.

Zarco crashed his Avintia Ducati at the Turn 5 left-hander, while Honda's Stefan Bradl tucked the front of his RC213V going through Turn 2.

Morbidelli's time was put under threat by Joan Mir's first flying lap on fresh soft rubber, with the Suzuki rider missing out by 0.062s in the end with under eight minutes to go.

Valentino Rossi on the factory Yamaha got even closer on his first time attack effort, guiding his M1 to a lap just 0.002s outside of his protege Morbidelli's best effort.

Mir lit up the timing screens on his next lap and took his Suzuki to a 1m40.441s to take over top spot.

KTM's Brad Binder was the first rider to dethrone Fabio Quartararo's best from FP1 when he fired in a 1m40.008s to lead the field by four tenths at one stage.

But his reign was short-lived, as Morbidelli and Zarco were putting in fastest sectors on their final laps. 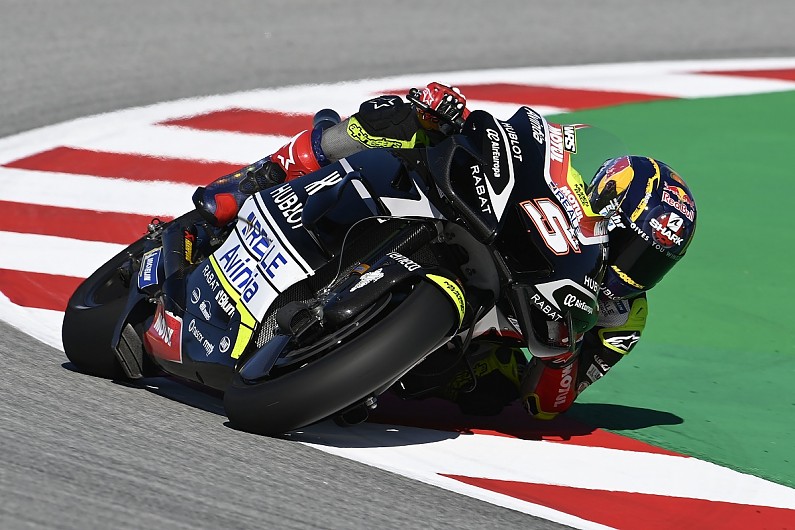 Morbidelli put in the best effort, a 1m39.789s to end Friday fastest of all ahead of the Ducati rider, who finished 0.109s behind at the chequered flag.

Mir was shuffled back to sixth ahead of the sister KTM of Pol Espargaro, while Alex Marquez (Honda), Rossi and the second Suzuki of Alex Rins completed the top 10.

A late issue for Quartararo meant he was unable to get out for a time attack and ended up 14th on the timesheets.

FP2 proved difficult for the GP20-mounted Ducati riders, with Jack Miller (Pramac) almost a second off the pace in 11th, while Andrea Dovizioso was 1.3s adrift of Morbidelli in 18th.

Francesco Bagnaia was 20th and Danilo Petrucci 2.4s off the pace in 22nd in last, though only Miller completed a soft tyre run on his GP20.