Pol Espargaro has secured both his and KTM's maiden MotoGP pole position in a dramatic qualifying for the Styrian Grand Prix. Here's how and when you can watch the race.

With the Red Bull Ring hosting the second leg of its double-header, polesitter Espargaro will be hoping to secure his first MotoGP win having seen rookie team-mate Brad Binder achieve the feat two weeks ago at the Czech GP with a stunning performance.

Takaaki Nakagami, who missed out on his own maiden MotoGP pole position by just 0.022s after having a lap time deleted late on for exceeding track limits, starts from second place for LCR Honda while Johann Zarco ended qualifying in third - but he will start the race from the pitlane due to his penalty for his part in the scary crash involving Franco Morbidelli in the Austrian GP.

With Zarco relegated from the starting grid, Suzuki's Joan Mir completes the front row ahead of Jack Miller who has been taken to hospital for checks on an injured shoulder suffered in a crash in FP3.

It was also a day to forget for fellow Yamaha rider Valentino Rossi, with the nine-times grand prix world champion failing to secure an automatic Q2 spot in practice before crashing in Q1.

While the on-track action remains enthralling, major news on reigning champion Marc Marquez's recovery was announced immediately after qualifying by Honda, with the Spaniard set to be out of action until at least late October as he recovers from a broken arm. 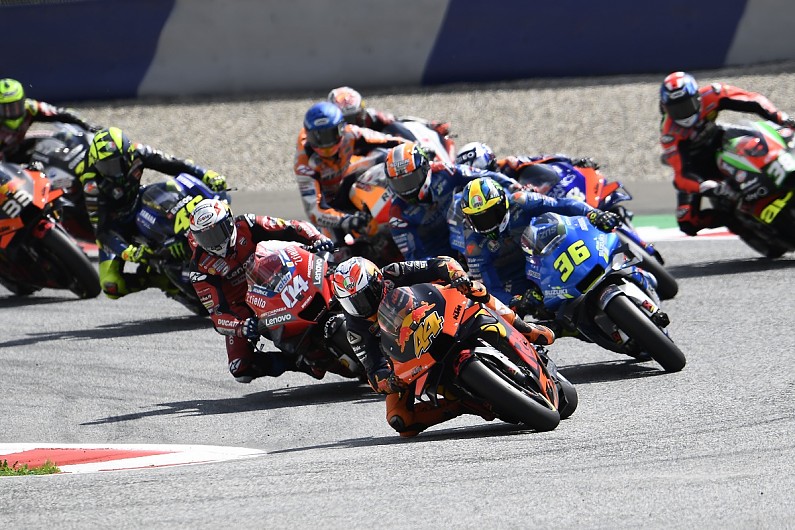 The race will be shown live on BT Sport 2, with coverage starting at 12:30pm BST, directly after the Moto2 race.

BT Sport will also be showing the Moto3 and Moto2 races from the Red Bull Ring before the Styrian MotoGP.

Current weather forecasts predict sunny and partially cloudy weather at the Red Bull Ring on race day, with a high of 24 degrees Celsius for the start of the MotoGP race - which is fractionally cooler than conditions in qualifying.