Pramac Ducati rider Jack Miller believes the 2019 MotoGP season was his most complete in grand prix racing, even more so than '14 when he fought for the Moto3 title.

Miller won six races for the Ajo KTM team in 2014 but lost the title by just two points to Alex Marquez - who only won three times - before stepping straight up to MotoGP in '15 with LCR Honda.

The 2019 season marked Miller's second with Pramac and Ducati, and his first with works machinery from the manufacturer, which he used to tally up his best premier class podium haul of five third-place finishes.

He cracked the top 10 in the standings for the first time in MotoGP in eighth on 165 points and was only 11 points away from ending the year as second-best Ducati runner.

Though a race-winner in 2016 at a wet Assen, when asked by Autosport if '19 was his best season in MotoGP he said: "Definitely.

"Even better than in 2014. [I made] a lot less mistakes, a lot more composed riding from my part, and I think it shows with the results.

"I've been working on it, but also the surroundings of the team... we've got a great understanding [between] the team and myself.

"I can't wait to be back here again next year with the group, with the guys.

"It's the first time I've been in a team for two years now, so it'll be nice just to 'be at home' sort of thing." 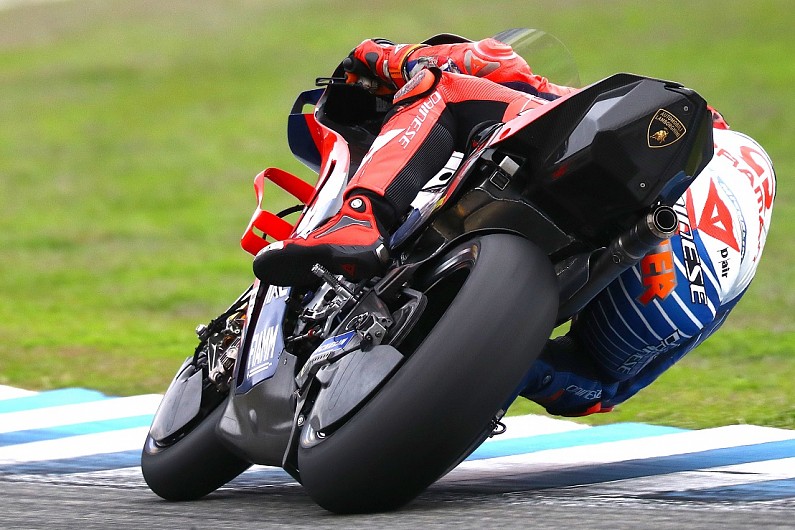 Miller will once again have machine parity with the factory Ducati riders next season, and he tested a prototype 2020 chassis and engine at Valencia.

He did not have the new parts for the following Jerez test, though Miller believes the new bike "should help" Ducati's main issue of cornering.

When asked if there was anything he didn't like about the 2020 bike, he said: "No.

"It is always strange if you try a new bike - especially like that in Valencia - back-to-back, with the bike you've been riding all season [that] you have a great feeling for at the end of the season.

"Everything feels a bit strange, but we try and look at the positives, and I think we found most of the positives out of it and understand where we should be.

"I think the new bike should help with places like here [Jerez], with these fast, flowing corners.

"But it is only speculation at the moment because I haven't been able to ride it here yet.

"There was [an improvement] in Valencia, we needed to play more with the set-up but we had limited time.

"I think they made headway, Dovi [Andrea Dovizioso] and those guys seem convinced.