Johann Zarco admits he can "enjoy" his MotoGP Australian Grand Prix result more after "thinking where I came from", a reference to his miserable 13-race stint with KTM.

The double Moto2 champion is replacing the injured Takaaki Nakagami on the year-old RC213V for the final races, having been dropped with immediate effect from KTM after the Misano round last month.

With limited dry running at Phillip Island, Zarco qualified 14th and fought with ex-KTM team-mate Pol Espargaro for 12th - ultimately missing out on the run to the line by just over a tenth of a second.

Zarco admits he had to "relearn" the confidence needed to push a MotoGP bike prior to the race, and says he has to be "happy" with how the weekend went.

"My first race on the Honda and it's with Pol I'm fighting," Zarco said. "But we were smiling at the end of the race, because maybe he felt I had the possibility to go faster, but he said 'no, you stay behind for at least one race'.

"[It's a] huge track, so fast. Marc [Marquez] said on Thursday you need confidence [to go fast here]. If you don't have confidence, you're almost better off not trying.

"I had to relearn all of that, [at] 300km/h (186.4mph), fighting with the guys and keeping the pace, doing 27 laps and having the confidence into the corners everywhere.

"So, good work. It's normal to be unhappy [with a weekend], but thinking from where I came from, I can enjoy this result." 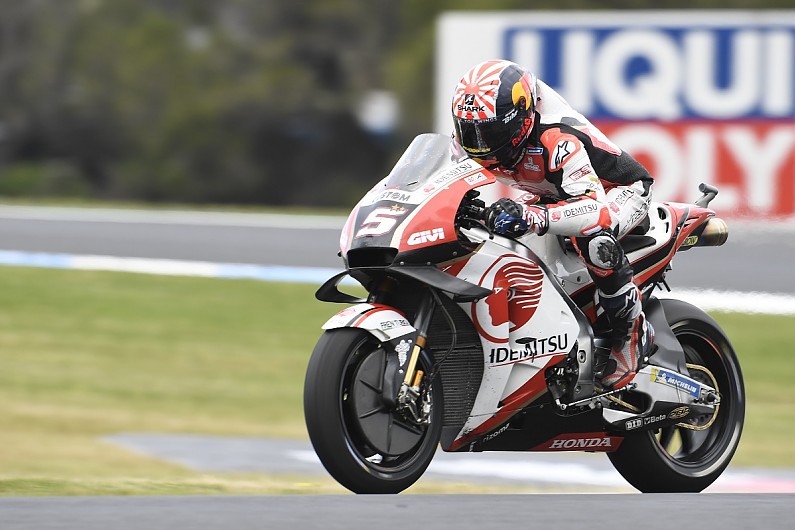 Zarco highlighted his ability to maintain a positive feeling on the bike throughout the race, but he has also pinpointed areas to work on this weekend in Malaysia.

"I could have a good fighting spirit and try my best and [I could feel] the good things on the bike - I didn't get a worse feeling.

"The feeling remained very constant from the beginning to the end of the race. Only in acceleration did I find it difficult to control the drive.

"I don't know if maybe I used [the] right tyre or not, because Marc won with the soft one. So, it means the soft was a good tyre and overall he won with 11 seconds [margin] over second.

"So, it is possible to manage, but I am still not able to. I felt things on the bike I'm going to work on to be able to control the bike better."

Reigning world champion Marc Marquez called Zarco's first race on the RC213V "acceptable", but refused to make a definitive assessment due to the weekend's weather-disrupted running.

But Marquez admits Zarco did "show something" promising after a strong run to sixth in fourth practice.

"Yeah, I mean it's difficult to say," Marquez said when asked to evaluate Zarco's performance. "Of course, we can say [he was] acceptable.

"I don't want to say one [definitive] word, because you saw the [weather this] weekend.

"I mean, wind, rain and then cold conditions. It's impossible to say.

"You need time, it's the first time that he got on the bike, [and in] not the best conditions.

"But he showed something, because in FP4 he was already there, and now in Malaysia, if we have a normal weekend you can evaluate him more."