Petronas SRT Yamaha rider Fabio Quartararo led the way in the opening MotoGP practice session for the San Marino Grand Prix at Misano by a healthy margin of 0.376 seconds.

Quartararo, who topped both days of the Misano test two weeks prior, outpaced Marc Marquez by nearly four tenths courtesy of a late fresh-tyre run - but had already spent most of FP1 in first place by then.

He and Marquez took turns in the lead in the opening spell of the session, the French rookie ending up on a 1m33.516s to the Honda rider's 1m33.575s at the conclusion of their first runs on the medium rear tyre.

Maverick Vinales on the works Yamaha was the only rider to run the pair close for most of FP1, sitting less than a tenth off, with the rest of the pack another four tenths off the pace.

Marquez lapped within 0.013s of Quartararo's benchmark just after the halfway point in the session, while the SRT rider himself came up just a hundredth short of improving his laptime.

Quartararo then equipped a pair of fresh mediums for his final run, and fired in a 1m33.153s, before nearly slipping off his bike at the fast Curvone right-hander on his next attempt.

Marquez and Vinales made up the top three behind him, with wildcard Michele Pirro picking up fourth place as the lead Ducati. 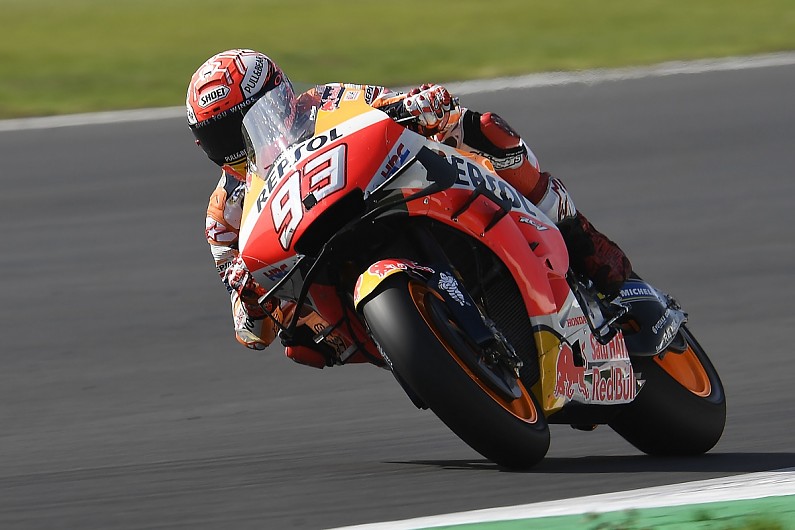 Franco Morbidelli (SRT) and Valentino Rossi made it four Yamahas in the top nine, the pair split by Ducati's Danilo Petrucci, with Rossi running Yamaha's new brake cover, exhaust and cover swingarm which first appeared at the recent test.

Avintia Ducati's Tito Rabat led works rider Andrea Dovizioso by 0.013s in 10th, but crashed late on in the session at Turn 5, nearly collecting Honda's Jorge Lorenzo in the process after he overtook the three-time world champion.

The two other riders to crash - Aprilia's Andrea Iannone and Pramac Ducati's Jack Miller - both went down at the Quercia left-hander of Turn 8.

Tech 3 KTM's Miguel Oliveira and Lorenzo, two riders who pulled out of the Misano test with injury, were 20th and 21st respectively, both just over two seconds off the pace.