MotoGP Catalan Grand Prix Friday pacesetter Fabio Quartararo says he "didn't expect" to be so quick having undergone surgery on an arm-pump issue just over a week ago.

The Petronas SRT rider underwent the operation last Tuesday in Barcelona, having experienced arm-pump problems during his run to 10th at the Italian Grand Prix.

Quartararo was second-quickest in Friday's first practice at the Catalunya circuit, before shooting to the top of the combined times in the afternoon by 0.281 seconds with a lap of 1m40.079s.

"Well, today I didn't take [pain] medication, so that's really good," Quartararo said when Autosport asked if he expects any physical issues as the weekend progresses.

"Of course, for the I race I will take something, so I don't know what the pain will be like for the race, because we are only on Friday.

"But, sincerely, I didn't expect that [to be fastest] after just a little bit more than one week from [having] surgery.

"But I improved by nearly three tenths, so I was really surprised to see this laptime on my dashboard." 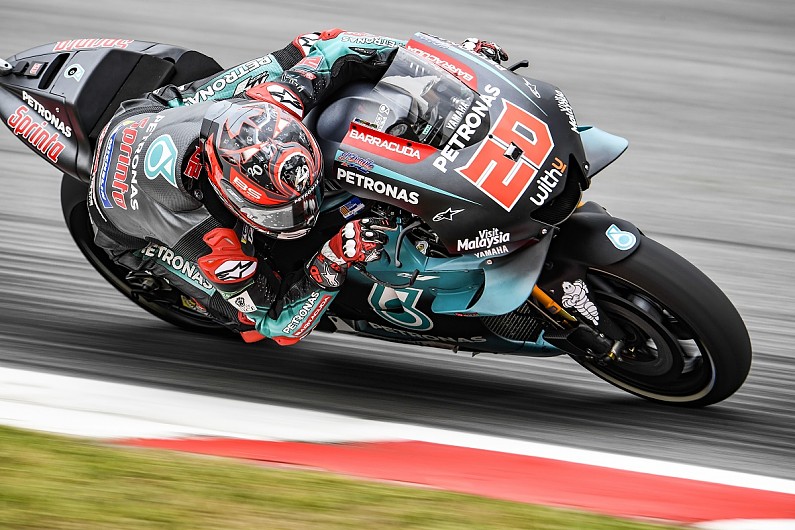 Quartararo took his first grand prix victory at Catalunya in last year's Moto2 race, which ultimately led to him securing one of the Petronas SRT Yamaha's for this season.

When queried why he chose to have the operation prior to this round, Quartararo said it was necessary to ensure he could actually make it to the finish of the upcoming Dutch TT at Assen - where he revealed he had some "alerts" to his arm-pump issue last year.

"In Qatar, I already have some small alerts [from my arms]," he said.

"At Le Mans, [the] last two laps and half of the Mugello race [I also had issues].

"If I didn't have it [the operation] for Assen, for sure we can't finish the race. [Because] Assen and Sachsenring are two races in a row, I think it is good to already have the arm prepared for these two hard races.

"The Mugello race was critical because we have some problems on the front tyre, so I needed to push much more, the way I had to manage my physical condition and my arms were difficult.

"So I got arm pump in the middle of the race. We didn't have fast surgery, we made all the tests [and then] we decided to have it.

"It was a clear vision from Dr [Xavier] Mir [MotoGP doctor], he said that one day or another you will need to have the surgery.

"We decide to have it now."