The new-for-2019 Petronas SRT MotoGP outfit has revealed its livery for its maiden campaign, in which it becomes Yamaha's new satellite team.

The team, which has replaced Tech3 as the sole non-factory Yamaha team in MotoGP, presented its livery at the Petronas Twin Towers in Kuala Lumpur on Monday.

Having made its debut in a plain black livery in post-season testing last year, the SRT YZR-M1 team's bikes will now carry a black-and-turquoise paint scheme with prominent branding for title sponsor Petronas.

The new premier-class outfit is run by the Sepang Circuit-owned SIC Racing, which has had programmes in Moto2 and Moto3 since 2014, taking podiums with Johann Zarco in the former and Jakub Kornfeil in the latter.

SRT takes the spot of the Angel Nieto squad, one of three Ducati satellite teams in 2018, as the MotoGP grid shrinks down to 22 bikes for the upcoming campaign following the exit of Marc VDS Honda.

"Our mission is to build up the best and strongest satellite team in MotoGP," said team manager Wilco Zeelenberg, who joined SRT from the works Yamaha squad. 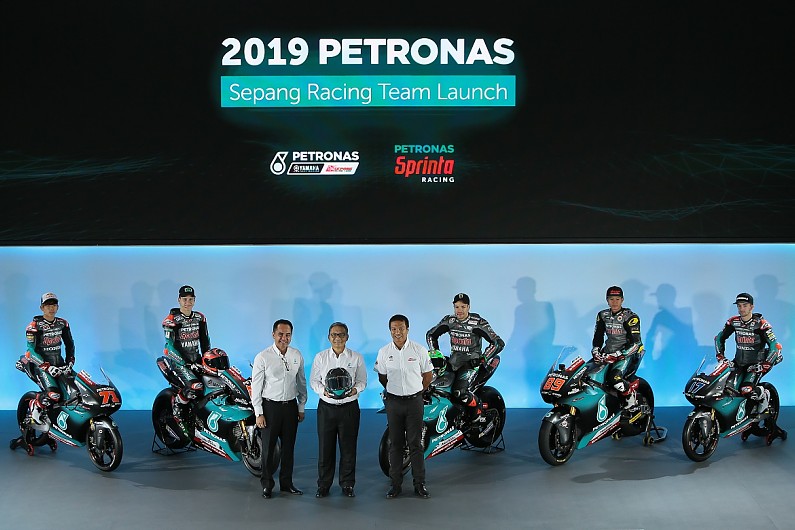 The new team will field Valentino Rossi's protege Franco Morbidelli, who is preparing for his sophomore season in MotoGP after a promising rookie campaign with Marc VDS.

He will be joined by Frenchman Fabio Quartararo, who at 19 will be the youngest MotoGP rider in 2019.

Morbidelli will campaign an 'A-spec' YZR-M1, close in specification to the works bikes of Maverick Vinales and Valentino Rossi, whereas Quartararo will ride a 'B-spec' bike.

"While the new MotoGP team remains an underdog, we are ambitious in our targets," said Sepang CEO Razlan Razali.

"It is important to start and perform our first year well, with the strongest confidence and trust in our two riders Franco and Fabio."

Razali added that a spot in the new MotoGP team is earmarked for the programme's sole Moto2 rider Khairul Idham Pawi if he performs at a high level.

Addressing Pawi at the launch, he said: "One of these Moto2 seats is for you to take, for you to seize and for you to be the first Malaysian rider in this team.

"This is your chance to reset, refocus, and we'll help you to be the best that you can be - and before you know it, you will realise your dream to be a MotoGP rider with Petronas Yamaha Sepang racing team."