MotoGP championship leader Andrea Dovizioso has praised title rival Marc Marquez for his ability to "play with the limit" on a bike.

Marquez led the standings heading into the recent British Grand Prix, but he fell back behind race winner Dovizioso due to retiring with engine failure.

The Honda rider was spectacular through practice and qualifying at Silverstone, crashing twice on the Friday and saving two big moments on Saturday on his way to setting the first sub-two minute lap of the track.

"One of the positive things of Marc is this; he is able to play with the limit, and not a lot of riders are able to do that," said Dovizioso.

"Most of the time you pass the limit, make a mistake, but he won a lot of titles so it means he is good to manage all the situations.

"For Marc it is difficult to try not to play with the limit - for him it's normal, he has to do that every time.

"Most of the time he is good [at being able] to do that, but everybody is really on the limit so anything can happen at any time."

Fellow Honda rider Cal Crutchlow believes Marquez has calmed his style over the course of this year, which he feels is a sign the three-time champion is getting more comfortable with his bike.

"I see him riding in a different way," said the Briton. "Sure he crashed this weekend, but he's a lot more wheels in line than he usually is.

"He seems to be riding the bike in a different way a little bit than at the start of the year and last year - he seems smoother to me.

"When he takes the risk he still looks a bit wild, but on the average lap he looks a lot smoother than his normal self, which normally means it's coming easy."

Crutchlow witnessed Marquez's spectacular high-side through Becketts in Friday practice at Silverstone, and he joked that only the 24-year-old could get away relatively unscathed from such a big accident.

"If that was anyone else he'd have two broken legs and dislocated shoulder!" he said.

"I have no idea how he gets away with it, and then to top it off again, the bike nearly hit him and he still managed to miss it whereas somebody else would be cleaned up.

"It shows true credit to how fast he is and how tough he is to get back up and start going fast immediately, which he did."

When asked by Autosport about how he reacts to a big crash, Marquez said: "After I crash, normally I like to go out [immediately] and attack, to be fast from the beginning.

"I take the second bike as quick as possible, because then you forget the crash.

"I push the limit straight away, riding fast and trying to improve the laptime. I need to try and I need to forget." 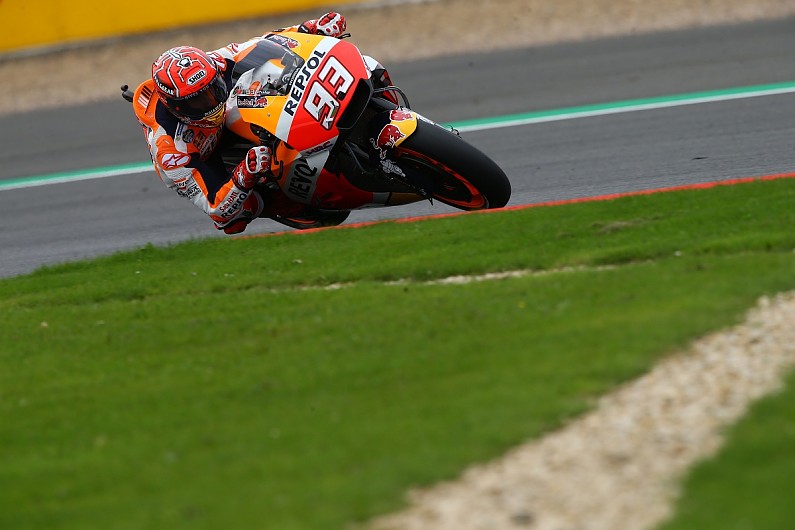