Suzuki rider Andrea Iannone says he wants to ensure his crash in MotoGP's season-opening Qatar Grand Prix is his "first and last" of the 2017 season.

Iannone was able to stay in the leading group for the first part of Sunday's Losail race, exchanging second place with Honda's Marc Marquez for a number of laps.

But just after half-distance Iannone crashed out at the Turn 5 right-hander, marking his second straight retirement from the lead pack in Qatar after his 2016 mistake.

He said slight contact with Marquez, who he expected to be faster, caused the crash but conceded that this was not a valid excuse for failing to finish.

"I tried to manage the risks, but when Marquez slowed unfortunately I made a mistake," Iannone said.

"I didn't realise that he could be so slow in this corner and I entered it like I did in previous laps.

"It's one of those things that can happen, but it shouldn't happen. 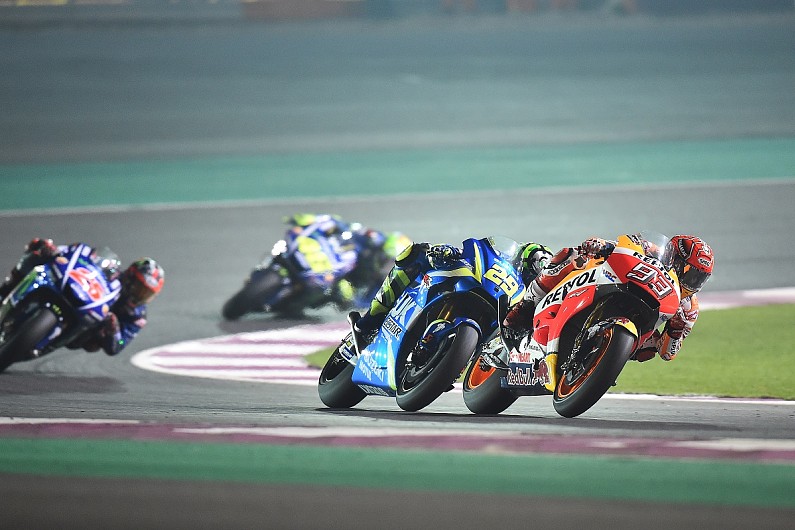 "Right now it's not easy for us to overtake, because we struggle with the brakes, but this is not an excuse.

"The problem is I made a mistake, but I shouldn't be making these errors.

"I hope that it's the first and the last of this year."

Iannone was optimistic he would have been on the podium had he finished, having generally had an encouraging weekend on his Suzuki debut - including a front row start.

"I think we had a good chance to fight for the podium," he said.

"We could have finished in third place and this would have been a great achievement, because we did not expect to have this potential after all our difficulties in testing.

"It's a shame, because in free practice we reacted very well by being close to the top riders.

"We arrived at the race very competitive, and this is positive."