Days of heroics at a heroes' circuit - that sums up the 2012 Silverstone MotoGP weekend.

After the cold 2010 and the pouring rain of 2011, finally we saw what the modern Silverstone can offer us in terms of racing. It was a fantastic trio of races with 36 changes of the lead during the Moto3 thrash alone. Fast race tracks produce great racing for bikes, and it was a reminder of what the old Assen was like with its kinks and flows. It's a bit of a cheesy line, but having done track days and taken a fast pillion ride at Silverstone with Cal Crutchlow two weeks earlier, I do have some idea of what these guys risk at meltdown speeds.

The main focus was always on the MotoGP race itself and if the Hondas could fight back against the currently-dominant Yamaha. Initially it was the 'other' Yamaha that shone with Ben Spies, before Jorge Lorenzo began a fantastic head to head with his arch title rival Casey Stoner. The best two in the world going head to head at one of the fastest circuits.

Lorenzo was back in sixth at the start but soon we saw him and Stoner go into Maggots together at 150mph. It was awesome but as the tyres drifted away from their sweet spot, so Lorenzo had the upper hand in controlling a worn Bridgestone rear to the flag. Win number four from six with a bike that's got the measure of the rest and a with a two year deal under his belt, longer than anyone else has currently got in MotoGP... who would bet against Lorenzo at the moment?

And then there was Cal Crutchlow, who dodged and avoided questions about his broken ankle - sustained in a Saturday morning crash - from the medical staff at the track. He lied and said it wasn't broken but had to hop around the medical centre to prove it. He said it was the hardest thing he had to do all weekend, including riding the bike. There really aren't many riders braver than Crutchlow, and it warmed the home fans who had had such a terribly cold and wet 2011 Silverstone weekend. It was some sort of payback for their loyalty as they watched Crutchlow fight through from the back of the grid, soon picking off the CRT bikes to then beat all the Ducatis and bag a sixth place on the very last lap. What Nicky Hayden must have thought as the 20th-place starter came past...

But the highpoint for me of the weekend was the fact that finally we could see the 21st century Silverstone in its best light. It didn't rain on race day, leaving people just a little chilled due to the wind that was howling over the old airfield, but many with rosy faces after a near full day of sunshine. The Red Bull Rookies race on Sunday saw the top nine covered by just two seconds after 33 minutes of racing, the Moto3 race was won by a tiny 0.9 seconds, the Moto2 by 1.4s and the MotoGP had 3.6s covering the top three, justifying the massive investment that the BRDC has ploughed into, and continues to plough into, the 3.6 mile circuit. It was just brilliant.

However, the championship rolls on and as soon as the trucks wheeled out of the paddock on Sunday all minds were on Assen on 30 June. Lorenzo will remember that he got knocked off last year on the very first lap, something you just can't factor in when racing. He may have a 25-point lead but if history repeats itself at Assen and Stoner wins then we're all back to level pegging. As much as I harp on about Jorge and Yamaha having a massive love-in at the moment, it only takes an off - just as Crutchlow found - for this MotoGP year to flip on its head and the others to be back in the hunt.

The days before Assen will also be days for Ducati to think once more about how to get out of its current plight. I heard only at Silverstone that during the Barcelona weekend there had been a strong report on Italian television about where the factory was going. After all, the Ducatis got beaten at Silverstone by a one-legged Yamaha rider who started from the back of the grid, so there might be some despair creeping into the place.

Will Valentino Rossi go back to Yamaha? Lin Jarvis says it is not impossible. Might Rossi buy a Honda ride with the sponsors' money (that he won't have a problem raising)? That might be dangerous when you never know what engine you're going to get given out of the back of the truck.

The telling image of Ducati for me over the weekend was a picture from a friend at the Le Mans 24 Hours. Inside the Audi hospitality suite, a Ducati MotoGP GP12 sat alongside the Quattros and the Le Mans winners. Immediately they are proudly showing off their assets, but as one of their brand new hybrid racers was victorious at one of the great motor races in the world, one of the great motorcycle racers was again struggling on a Ducati in the dry.

Whatever plans Audi has for Ducati, and I know not what they might be, it won't let this go on for much longer. The trick it has to hit is to not be too heavy-handed with a very historic and passionate company that has a very different culture of day to day operation.

Once more as the same people move around the world tending to the carbon fibre, magnesium and titanium, the politics morph and move in MotoGP. That is what is so fascinating to some, and boring to others. But what is always fascinating is great racing like that which captured the adrenaline of the world's best at Silverstone last weekend. With two years to go in Silverstone's deal, we look forward to more MotoGP race days like that. 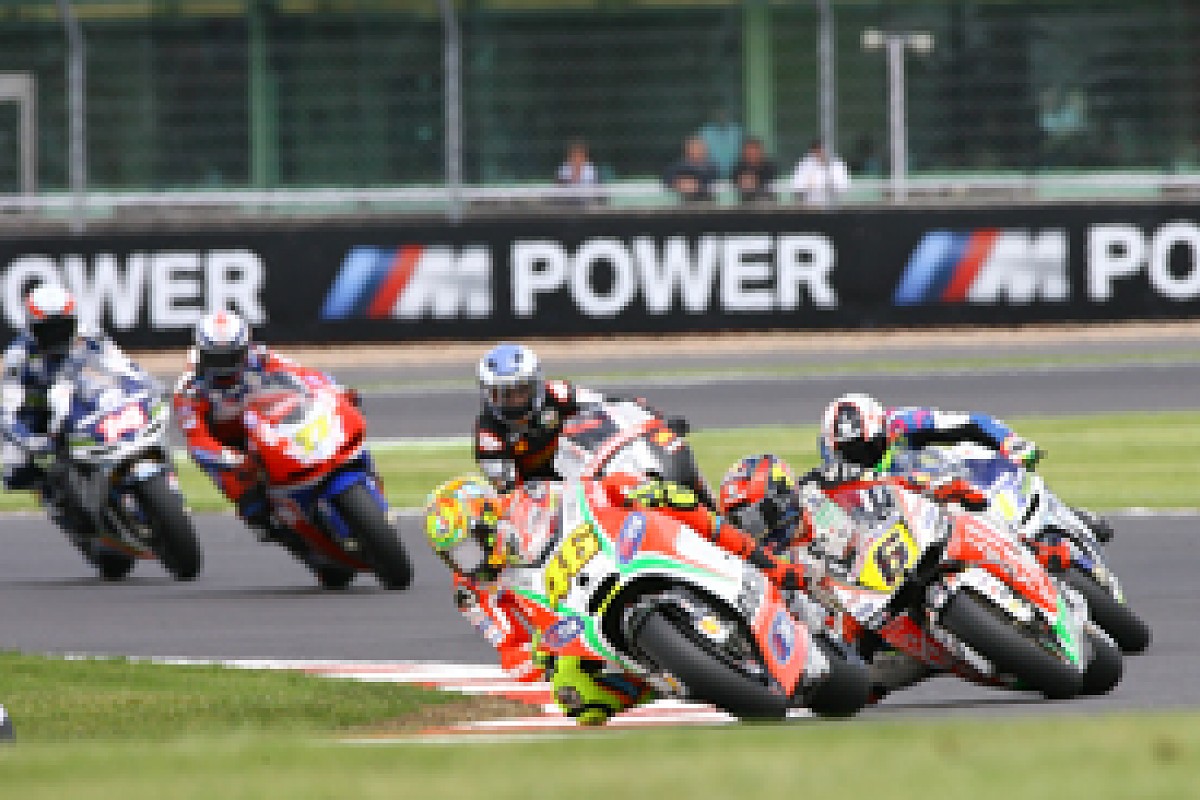