Sergio Garcia dominated a wet Moto3 French Grand Prix ahead of Filip Salac, as Pedro Acosta recovered to eight after an early crash to extend his championship lead.

So treacherous were the conditions at the start that Avintia’s Carlos Tatay crashed exiting pitlane on his sighting lap, which forced him to the back of the grid.

Poleman Andrea Migno held firm on the run up to the Dunlop chicane at the start, though ran off track and allowed Ajo KTM’s Jaume Masia to move into the lead – Migno slipping back to fifth.

Masia made a mistake down at the Garage Vert double-apex right-hander a moment later, dropping to third and promoting the other Avintia KTM of Niccolo Antonelli into the lead.

But Antonelli’s race lasted just a few more corners as he crashed at the final corner, with the Snipers Honda of Filip Salac taking over at the front of the pack.

Championship leader Pedro Acosta had made great gains from 21st of the grid, the Ajo KTM rider 11th at the end of lap one and up to sixth by the start of the third tour. 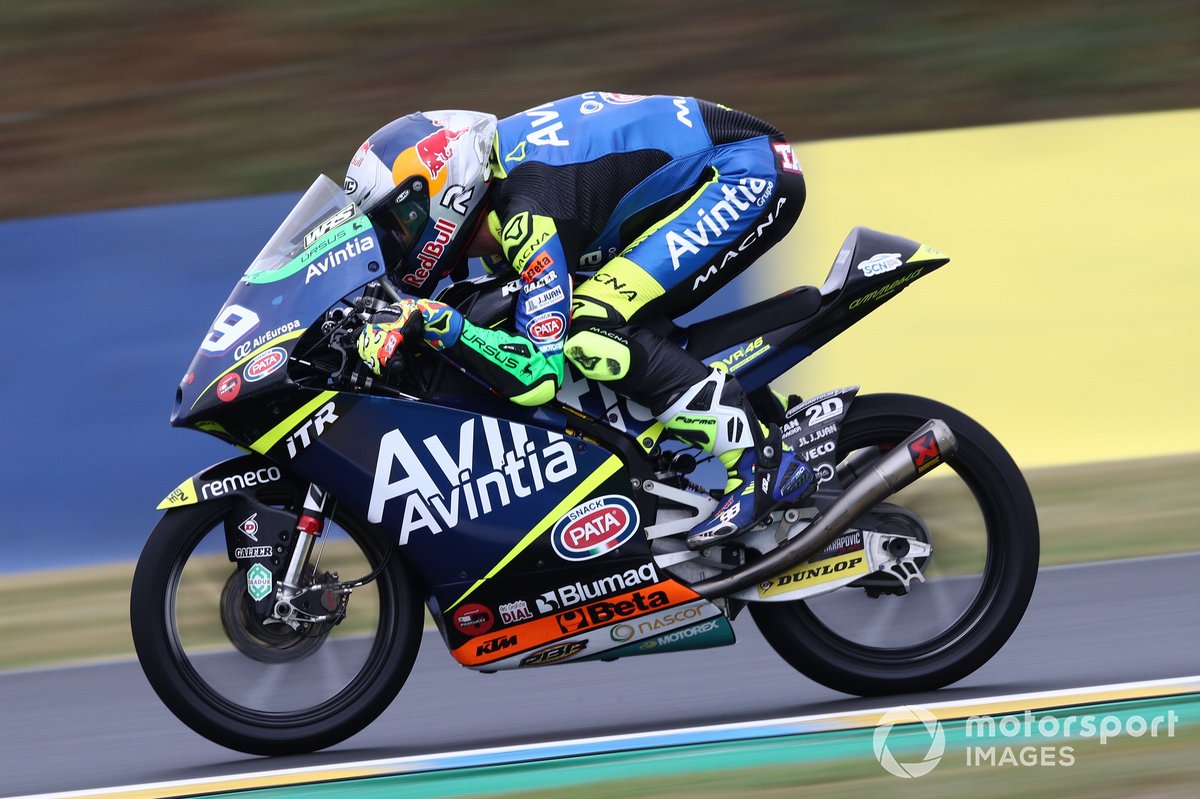 But Acosta slid off at the Dunlop chicane, dropping back outside the top 20 and forcing him into another recovery ride.

Team-mate Masia crashed out of podium contention seconds earlier at the last corner, with the conditions also catching out SIC58 Honda’s Tatsuki Suzuki and the Gresini duo of Jeremy Alcoba and Gabriel Rodrigo.

Riccardo Rossi briefly snatched the lead from Salac on the second lap, but made an error at La Chaelle, which allowed Salac back into first.

At the Chemin aux Boeufs esses on lap two, Garcia moved ahead of Salac, with the pair quickly putting a buffer of over five seconds between themselves and Rossi behind.

By lap eight Garcia’s lead was already over a second, but Salac dug deep over the following tours to reduce his deficit to under a second again.

A mistake from Garcia at Garage Vert allowed Salac briefly back into the lead on lap 13, though Garcia would reclaim the position a few corners later.

Once back in the lead, Garcia opened up a lead over over two seconds to ease to the chequered flag for his second Moto3 victory and first since Valencia 2019.

Salac remained second for his maiden podium, with BOE Owlride KTM’s Rossi resisting a late charge from John McPhee to hold onto his first podium in third.

Xavier Artigas was seventh on his Leopard Honda having been forced to visit hospital on Saturday following a crash in FP3.

Acosta completed the top eight after his earlier fall, which opens his championship lead up to 54 ahead of Garcia following a disastrous race for the likes of Antonelli and Masia.

Deniz Oncu was ninth on the sister Tech3 KTM, with Romano Fenati completing the top 10 on his Max Racing KTM.