Pedro Acosta claimed an historic third Moto3 victory in the Spanish Grand Prix while chaos erupted at the final corner of a dramatic Jerez race.

Ajo KTM rider Acosta has become the first grand prix rookie in history to score four podiums from their first four races, after riding a perfect final lap to claim his third-straight win to pull out a commanding 51-point lead in the championship.

Poleman Tatsuki Suzuki grabbed the holeshot off the line from the Snipers Honda of Andrea Migno and Gabriel Rodrigo on the Gresini Honda.

PLUS: The "old-school" Moto3 rookie taking MotoGP by storm

Rodrigo and Suzuki engaged over the lead on lap two, with the former making a move stick at the Peluqui right-hander and was able to put a few bike lengths between himself and the SIC58 Honda.

But the Gresini rider’s charge ended on lap five when he highsided out of the race at the Turn 7 left-hander – the second big crash there after Petronas Sprinta’s John McPhee was flung from his Honda on the opening lap to leave his title hopes in tatters.

Rodrigo’s exit promoted Tech3 KTM’s Deniz Oncu to the lead, though he would briefly drop behind Migno after running wide on the way into the final corner at the end of the fifth lap.

The Turkish rider returned to the lead a corner later, while behind championship leader Acosta ghosted his way into the podium places having started 13th.

And on lap eight Acosta moved ahead of Oncu at the Pedrosa right-hander, though Oncu would be back at the head of the pack by lap 10.

In typical Moto3 fashion, the battle for victory turned chaotic in the closing stages, with Oncu, Acosta and Max Racing’s Romano Fenati on the Husqvarna all hitting the front.

Oncu led the field at the start of the penultimate lap, leading a Red Bull KTM 1-2-3 ahead of the Ajo pair of Acosta and Jaume Masia. 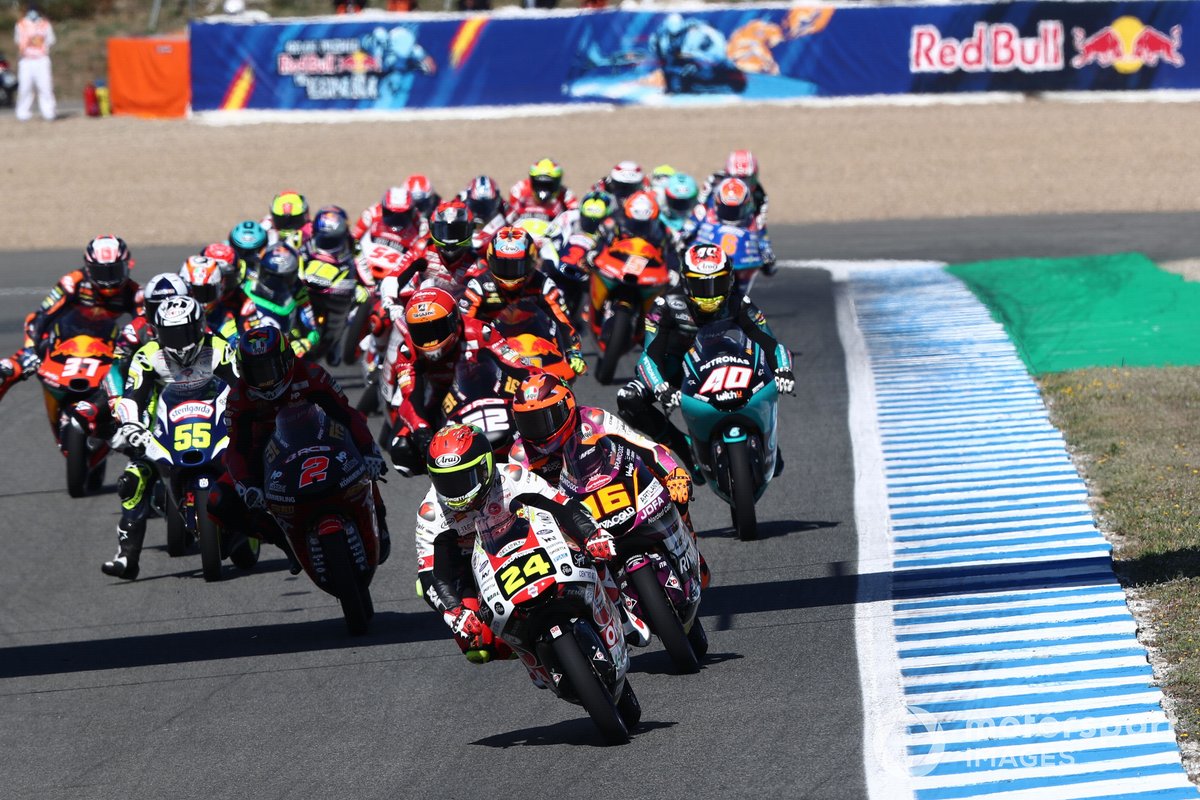 Masia tried to go around the outside of Oncu into the Pedrosa corner, but the Turkish rider defended the position.

That duo was able to break away slightly as Acosta almost highsided out of third, dropping behind Fenati, who had to check up slightly.

But Acosta got back on terms with Masia and Oncu ahead onto the final lap and pulled off a stunning double overtake on the brakes into the Pedrosa corner to take the lead.

Acosta had his KTM stablemates of Masia and Oncu all over him on the run through the final sector, but the 16-year-old held a tight defensive line into the last turn to maintain his lead through to the chequered flag.

With the door to the lead shut, Oncu came into the last corner too hot and tucked the front, wiping out a furious Masia and compounding Petronas Sprinta’s miserable day by taking down Darryn Binder too.

This allowed Fenati to secure his first podium of the season in second, while Jeremy Alcoba on the remaining Gresini Honda completed the rostrum having had to serve two long lap penalties.

Early leader Suzuki’s hopes of a podium ended on lap 13 when he crashed at Turn 2.