Topping every practice session and taking pole, Fenati has been in imperious form throughout the Silverstone weekend and capped it off with his 13th career Moto3 victory.

Fenati transformed pole position into the holeshot off the line, while Antonelli boldly carved through into second from fifth on the grid into the start of the Maggotts/Becketts complex.

At the back of the field, championship protagonists Acosta and Sergio Garcia had recovered from the penultimate row of the grid to 16th and 17th.

By lap three Rossi had been properly cast adrift of the leading trio, with Rossi dropping into the clutches of the group behind headed by the Leopard Honda of Dennis Foggia.

Acosta and Garcia had worked their way into the points by the second lap, but hopes of either Ajo KTM rider or the Aspar GasGas of Garcia salvaging a podium were quickly dashed as the pair went to war over the next few laps. 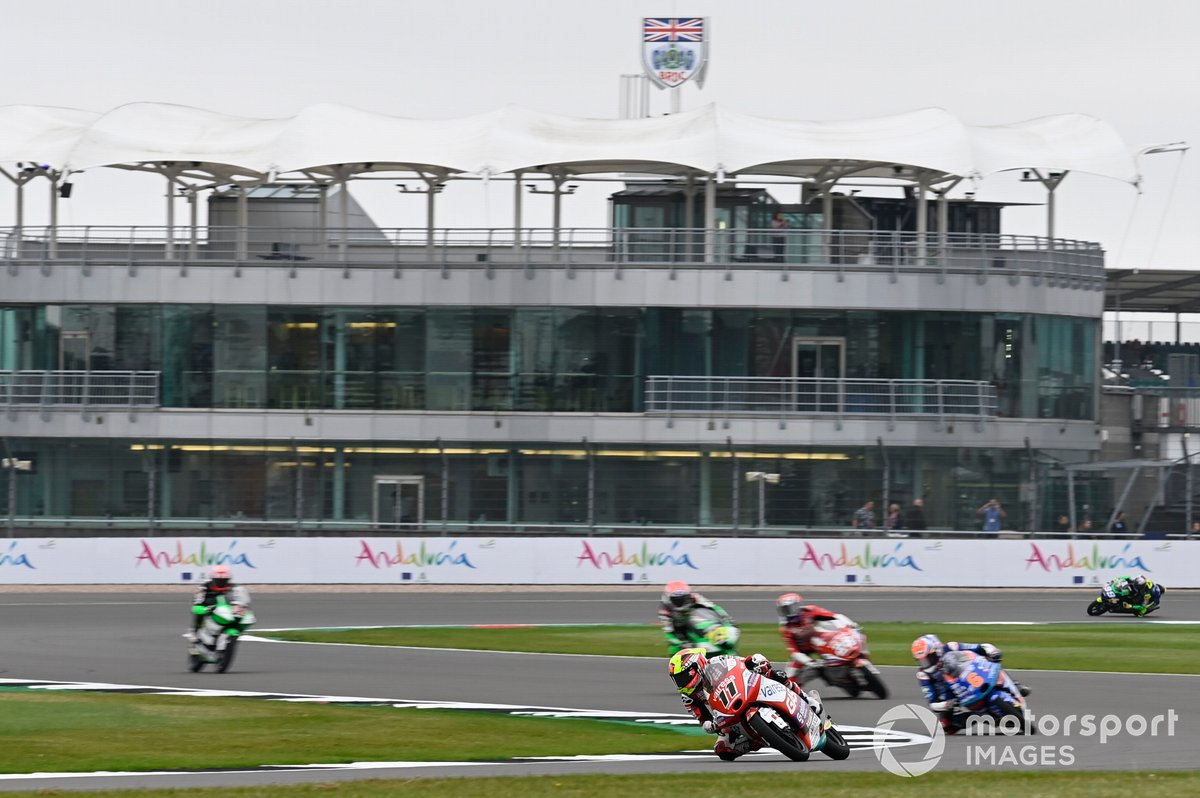 This allowed the rest of the field to disappear up the road while the battle for 10th swelled to 10 riders as the race wore on.

At the front, Migno’s race came to a cruel end when his Honda expired at the Abbey right-hander at the start of lap six.

This put almost three seconds between Fenati and Antonelli and the pack behind, with that gap continuing to grow over the next few laps.

Antonelli kept his Avintia KTM right in the wheel tracks of Fenati’s Max Racing Husqvarna, but the door was kept firmly closed to any overtakes.

As the race entered the final three of its 17 laps, Fenati opened up a gap of over half a second as he pulled the pin.

Fenati extended his lead to over a second to start the final lap and eased to the chequered flag to claim his first victory since the 2020 Emilia Romagna GP to complete a weekend of total domination at Silverstone.

As Fenati pulled away in the lead, Antonelli started to quickly drop into the clutches of Aspar’s Izan Guevara and Foggia, the gap under a second on the final lap.

But Foggia and Guevara battled too hard to reel in Antonelli, leaving the Italian to claim second just two weeks after fracturing his wrist in Austria, while Foggia pipped rookie Guevara for the final podium spot.

The final top 10 spots were claimed by Tech3 KTM’s Deniz Oncu, Rossi and the sister Avintia KTM of Carlos Tatay, while Acosta was promoted to 11th after Petronas Sprinta’s John McPhee was docked a spot for exceeding track limits on the final lap.

Crucially, however, his nearest title rival Garcia failed to score points after missing out in 16th.

This has pushed Acosta’s championship lead back up to 46 points over Garcia, while Fenati has closed in slightly to 69 points adrift.