Fenati was ousted from the world championship last year when he grabbed the brake lever of Forward Racing's Stefano Manzi in a controversial incident during the Misano Moto2 race.

He lost his current ride with the Snipers team in the class, and had his contract for 2019 with the MV Agusta-backed Forward team terminated, while the FIM handed him a ban until the end of the year.

Fenati was thrown a lifeline by the Snipers team for this season, and took his first grand prix victory since 2017 at the Red Bull Ring in August.

But, he has missed the last two rounds at Misano and Aragon due to injury, leaving him 13th in the standings - 10 places behind team-mate Tony Arbolino. 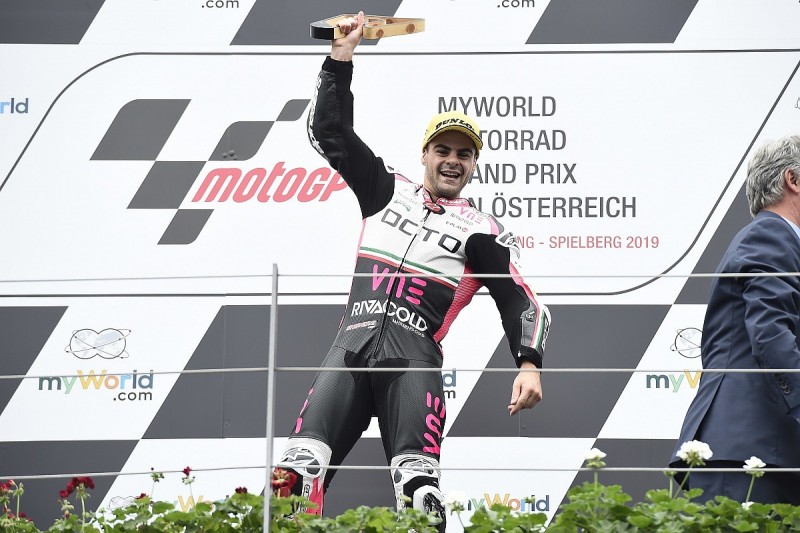 Fenati had been linked with a return to Moto2 next season, possibly with the Gresini squad, with that move seemingly taking a step closer during the Misano weekend when it was announced current Gresini Aprilia MotoGP rider Andrea Iannone and his brother Angelo had taken over management duties for Fenati.

However, he will remain in the lightweight class with the Biaggi team, with current Tech3 MotoGP rider Hafizh Syahrin now set to take the second Gresini Moto2 bike alongside the now ex-VR46 Academy member Nicolo Bulega.

In its first year in grand prix competition, four-time 250cc champion and 13-times MotoGP race winner Biaggi's squad is fighting for the title with a solo KTM piloted by Aron Canet, who is stepping up to Moto2 next year with the Angel Nieto team.

Fenati's will be joined by Alonso Lopez, who moves across from the Monlau-run Estrella Galicia team, which has already confirmed Sergio Garcia and Ryusei Yamanaka for the 2020 campaign.

The Snipers outfit will replace Fenati with Czech rider Filip Salac in 2020, with Arbolino staying on for a third season with the team next year.