A late crash for runaway points leader Acosta offered Garcia a major chance to take a massive chunk out of his championship advantage - but he too fell on the final lap while running third - as Foggia won the race with a last-corner move on Oncu.

Darryn Binder converted pole to the holeshot off the line, while Garcia moved into second ahead of the Gresini Honda of Gabriel Rodrigo.

Rodrigo would briefly hold the lead after moving ahead of Binder at the end of the opening lap, but the Argentine’s race would end on lap six when he highsided out of the final corner.

On lap three Andrea Migno moved his Snipers Honda to the front of the pack, though Binder soon retaliated at the end of the tour – before Tech3 KTM’s Deniz Oncu took the first of his stints leading the race into Turn 1 on lap four.

Oncu would keep the chasing pack at bay until lap 10, when the Leopard Honda of Xavi Artigas slid up the inside of the Turkish rider at the Turn 5 left-hander.

Artigas would have the favour returned on him by Oncu at the same corner on the following lap, with the Tech3 rider holding onto the lead until lap 13.

It would be the sister Leopard Honda of Dennis Foggia who would demote Oncu at the first corner on the 13th tour of 19 – though once again the Tech3 rider retaliated at the end of the lap. 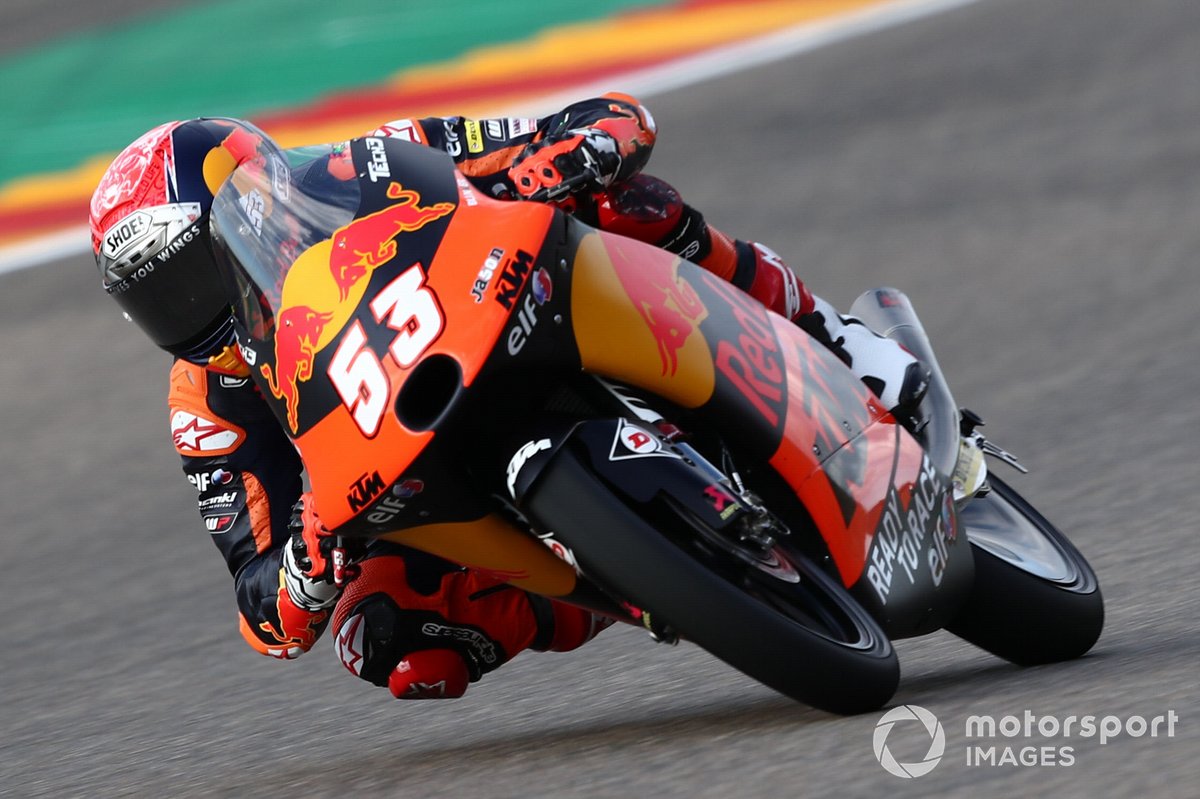 The battle in the lead group for the podium spots was fierce, and it would ultimately lead to a major drama in the championship battle.

Points leader Acosta lost the front-end of his Ajo KTM while trying to pass Artigas at Turn 5 and took the pair of them down – registering the first DNF of his stunning rookie season.

This gave Garcia a massive opportunity to reduce Acosta’s championship lead from 46 points to at least 30.

But the Aspar GasGas rider fell while running third into the Turn 12 left-hander, which means Acosta’s championship lead remains intact going to Misano.

In the battle for the lead, Foggia positioned his Leopard Honda perfectly in Oncu’s slipstream down the back straight and launched a successful raid into the penultimate corner.

Foggia kept his line tight through the long double left to finish the lap and keep Oncu behind by 0.041s to claim the third win of his 2021 season.

Oncu headed Tech3 team-mate Ayumu Sasaki at the chequered flag, with Izan Guevara equalling his season-best result of fourth on his Aspar GasGas.