Moto2 squad Marc VDS has replaced the Honda MotoGP-bound Alex Marquez with Augusto Fernandez, increasing the liklihood that Johann Zarco will sign for Avintia in MotoGP

The Belgian-owned outfit Marc VDS, which has won three of the last six Moto2 riders' titles with Marquez, Franco Morbidelli and Tito Rabat, was left scrambling to find a rider for 2020 after Honda chose the under-contract Marquez to replace the retiring Jorge Lorenzo.

Earlier on Sunday Avintia rider Karel Abraham confirmed he would not be returning to the team, opening up a seat in MotoGP and adding to the rumours of Zarco's potential deal.

With Zarco seemingly out of the equation, Fernandez (pictured below) will move across from Pons Racing to partner the previously-confirmed ex-Aprilia MotoGP rider Sam Lowes in Marc VDS' line-up.

"It is a dream come true to continue growing in a great team like this," Fernandez said.

"My objective is to give the maximum and to work very hard to fight for victories and have the opportunity to fight for the world championship." 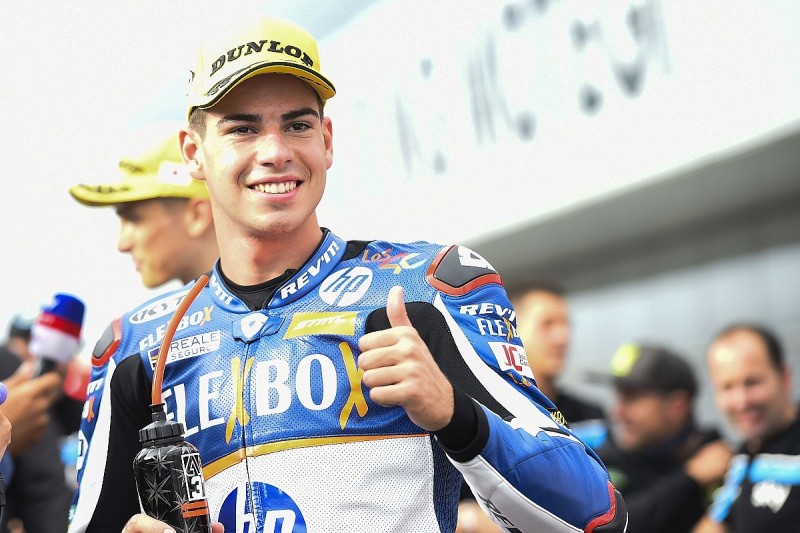 The 22-year-old Spaniard has enjoyed a breakthrough campaign in the intermediate class this year, and looked as Marquez's main threat for the title after amassing three wins in a short period.

However, his form tailed off in the final stretch, and he wound up finishing fifth in the standings, 55 points down on champion Marquez.

"The choice of Augusto Fernandez to represent the colours of Team Estrella Galicia 0,0 Marc VDS in 2020 is not random," team manager Joan Olive said.

"His great performances throughout the season made us notice him and his name was among the possible additions in the future.

"As a vacancy arises in the team, it is our pride and pleasure to be able to incorporate a pilot of Augusto's stature into the team and with whom we hope to continue fighting for the top positions."

Having previously confirmed an unchanged line-up of Fernandez and fellow race winner Lorenzo Baldassarri for 2020, Pons has drafted in Hector Garzo for the upcoming Valencia test, where it will evaluate the MotoE frontrunner as the potential full-time replacement for Fernandez.

Is Alex Marquez more than just a 'brother of...'?