Veteran team boss Fausto Gresini tragically died in February after a battle with COVID-19, with the team announcing earlier this week that ownership of the squad had been taken over by his wife Nadia Padovani.

Di Giannantonio jumped poleman Remy Gardner off the line and quickly opened up a gap of seven tenths after the first three laps on his Gresini Kalex.

The Italian clicked into a devastatingly consistent pace and, after five laps, was already a second clear of the field, with the gap quickly increasing to well over two seconds by the ninth tour.

Ajo KTM rookie Raul Fernandez moved into the podium places on the third lap after moving ahead of Marc VDS’ Augusto Fernandez and began to ease his way towards team-mate Gardner.

Fernandez moved into second ahead of Gardner at the Angel Nieto right-hander on lap nine, with Marco Bezzecchi on the VR46 Kalex following suit on lap 11 after a brief battle with Sam Lowes.

In clean air, Fernandez was able to knock a few tenths off of Di Giannantonio’s lead, the Ajo rider closing the gap down to 2.1s by mid-distance.

But Fernandez’s pace wilted a little in the latter stages, Di Giannantonio able to push his advantage at the front back up to over 2.5s. 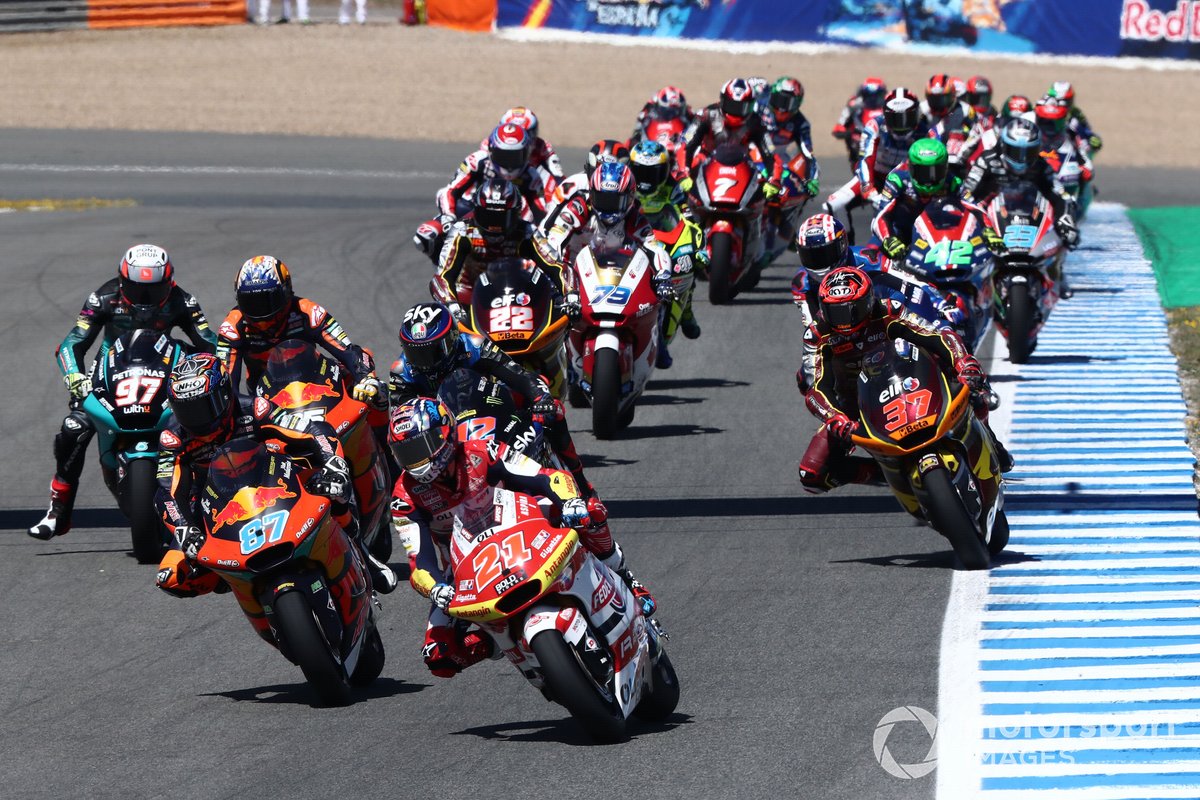 Bezzecchi put Fernandez under immense pressure before taking second away from the Spaniard at the first corner on lap 18.

The VR46 rider was able to quickly pull away from Fernandez, but could do nothing to mount any pressure on Di Giannantonio, who eased to the chequered flag for his first Moto2 victory.

Bezzecchi held onto second for his first podium of the season, while Lowes completed the rostrum on his Marc VDS Kalex after passing Fernandez at Turn 2 on the penultimate lap.

Fernandez hit major grip issues in the latter stages and was powerless to stop team-mate Gardner demoting him to fifth when Lowes moved into third.

Gardner’s fourth keeps him in the lead of the championship by three points from Lowes, with 17 points covering Gardner, Lowes, Fernandez, Bezzecchi and Di Giannantonio after four rounds.

Xavi Vierge was sixth on the sole Petronas Sprinta Kalex in the race after Jake Dixon was forced to withdraw due to a concussion from a crash in Sunday morning warm-up.