Raul Fernandez recovered from an early mistake to lead a Ajo KTM 1-2 in the Moto2 Dutch Grand Prix as his links to a MotoGP ride for 2022 intensify.

The rookie looks set to join team-mate Remy Gardner at Tech3 in MotoGP next year and brushed off his crash out of the German GP with an emphatic victory at Assen.

Aron Canet grabbed the lead off the line on his Aspar Kalex, while Sam Lowes and Remy Gardner traded second spot at the Dulkersloot right-hander at Turn 11.

Marc VDS rider Lowes scythed through on Canet at the end of the opening lap, though would be demoted back to third through the first few corners by Canet and Gardner.

Behind Raul Fernandez on the Ajo KTM Kalex ran off track through the Ruskenhoek section at Turn 7 and dropped down to ninth, while two turns later team-mate Gardner took the lead from Canet.

Gardner put six tenths between himself and Lowes on lap three, but the Britain closed him down and attempted to take the lead away from him at the Geert Timmer chicane at the end of the fifth lap.

Lowes ran slightly wide into the first part of the chicane and let Gardner draw back alongside, but the pair lost momentum and Augusto Fernandez on the second Marc VDS Kalex came through at Turn 1 to take the lead.

The Marc VDS pair put some daylight between themselves and Gardner, while Raul Fernandez had worked his way back up to fourth by lap seven and was only a second behind his team-mate.

Gardner regrouped on the following tour to get back on terms with the Marc VDS duo, moving ahead of Fernandez at the Strubben hairpin at Turn 5 when he made a small mistake.

Raul Fernandez caught up to the leading trio headed by Lowes on lap 12 and moved into third ahead of Gardner at Turn 1 two tours later at the same time Augusto Fernandez took the lead away from Lowes. 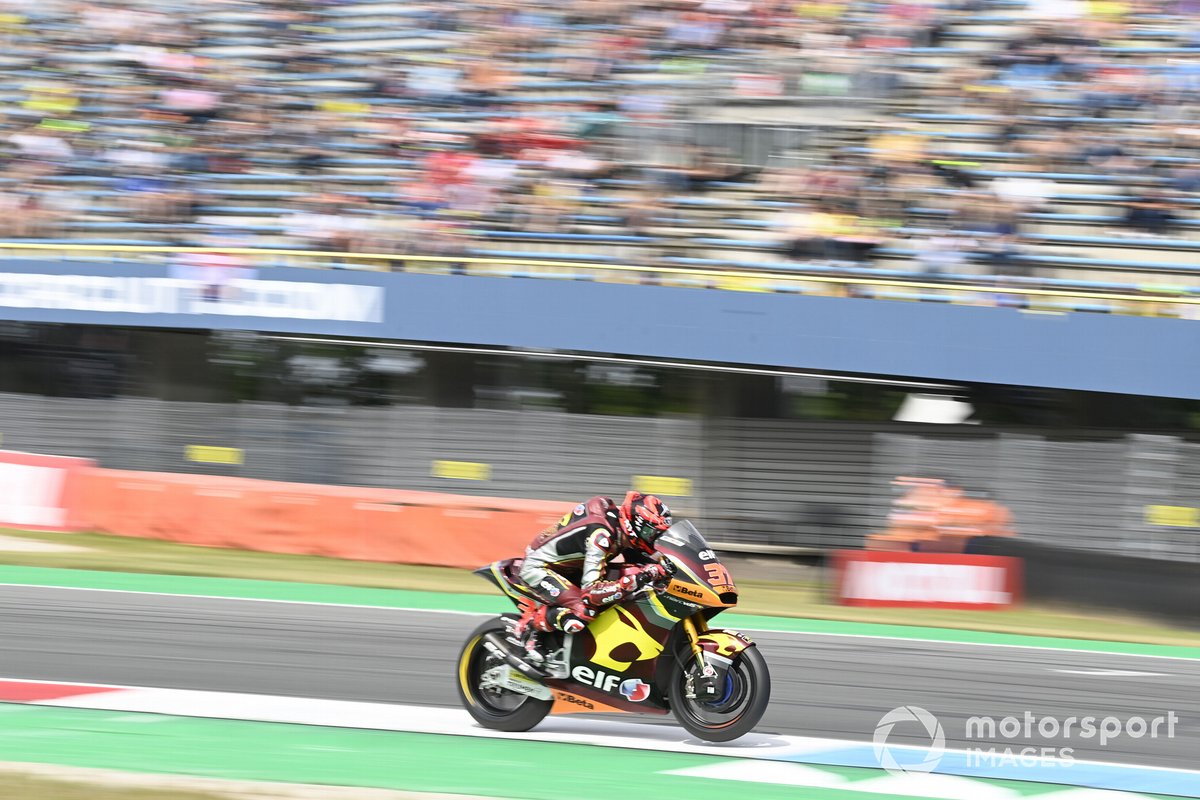 Raul Fernandez’s charge to the front continued on lap 16 when he passed Lowes at the first corner and repeated that move on Augusto Fernandez two tours later to hit the front.

Fernandez would quickly run away from the trio of Gardner, Lowes and Augusto Fernandez behind to claim his third win of the season by 1.066 seconds.

Gardner won the battle for second, beating Augusto Fernandez by 0.199s – who gets his first podium since 2019 - and Lowes, with VR46’s Marco Bezzecchi a distant fifth.

After leading the race early on Canet slid down the top 10 order and crashed out with five laps to go, joining MotoGP-bound Gresini rider Fabio Di Giannantonio on the sidelines after he fell a few laps prior.

Intact GP rookie Tony Arbolino was taken to the medical centre after a fast lap one crash at the Ruskenhoek, while Italtrans duo Lorenzo Dalla Porta and Joe Roberts also fell out of the race.

Gardner’s lead in the standings has been cut slightly to 31 points by Raul Fernandez heading into the summer break, with Bezzecchi 56 adrift.