Johann Zarco will graduate to MotoGP with Tech3 Yamaha next year as a two-time Moto2 champion, after securing the 2016 title with a commanding Sepang victory.

Zarco started the Malaysian Grand Prix 22 points ahead of Thomas Luthi and 25 clear of Alex Rins, and could wrap things up by finishing with a buffer of more than 25 over both riders with just one round remaining.

Having qualified on pole by a mammoth 2.134 seconds in greasy conditions, Zarco settled into the lead pack while Luthi fell away in the bottom half of the top 10 and Rins struggled to reach it at all.

Franco Morbidelli led for the opening 14 laps, before Zarco sliced past at Turn 4 as the circuit dried.

Zarco then rode away at the front, setting consecutive fastest laps to be two seconds clear two laps later, and claimed his fifth win of the campaign by 3.256s.

The 26-year-old is the first rider to win back-to-back Moto2 titles since the format was introduced in 2010, while Jorge Lorenzo was the last to defend an intermediate class crown, doing so in 250cc in 2006 and '07.

Morbidelli relinquished second to Jonas Folger after an off, but Folger handed it back with two laps to go with an error of his own, while Luthi finished sixth and Rins 14th.

Zarco had a relatively muted start to his title defence, and was fourth in the standings after crashing out of his home race at Le Mans, the fifth GP of the season.

However he then won four of the next five races on his Ajo Motorsport Kalex - and was second in the other - to take the championship lead and be 34 points clear after the Austrian GP in August. 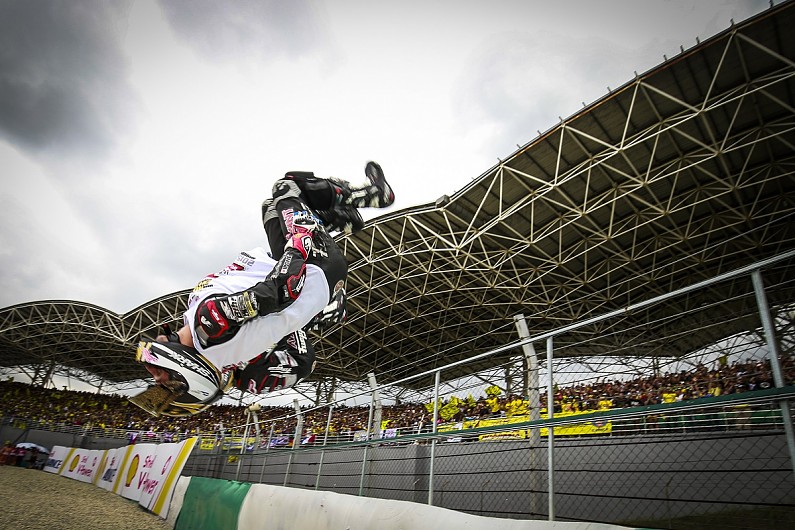 He has only been on the podium once since, his mixed run including a clash with then-title-contender Sam Lowes at Silverstone, but has maintained the championship lead.

Rins closed to within just one point of Zarco after the Aragon GP, but injured his shoulder in a practice accident at Motegi and crashed out of that race and the Australian GP seven days later.

Luthi won three of the five grands prix preceding Sepang, but had to come from 75 points behind Zarco after missing the Czech GP due to a concussion sustained in qualifying.

Zarco and Folger with Tech3, Rins with Suzuki and Lowes with Aprilia will all move up to MotoGP in 2017.

Ajo Motorsport also won the Moto3 title with Brad Binder, and is switching to KTM machinery in Moto2 next year.