One of Formula 1's best feel-good stories for many years came out of Barcelona last Sunday night after Williams driver Pastor Maldonado converted his strong qualifying pace into victory at the Spanish Grand Prix.

The Venezuelan defied critics and held off former world champions Fernando Alonso and Kimi Raikkonen, as well as looking after his tyres, to take his maiden F1 victory and give Sir Frank's squad its first win since the end of 2004.

In this issue of AUTOSPORT magazine, we bring comprehensive coverage of all the news, views and action from Barcelona, with technical analysis, minute-by-minute happenings on and off the track, as well as all the usual facts, figures, results and lapcharts from the fifth round of F1 2012.

AUTOSPORT's news hounds talk to Williams tech chief Mark Gillan about Maldonado's breakthrough win, his increasing maturity and the impact that winter reshuffles have had on the team. What's clear from the result on Sunday is that this iconic British team is confident it can stay at the sharp end and give the more fancied frontrunners a run for their money for the rest of the season.

Mark Hughes column - This week our grand prix editor delves into the murky depths of F1's new Concorde Agreement and analyses why Mercedes thinks it has good reason to reject Bernie Ecclestone's proposal that has already been agreed by its direct rivals. 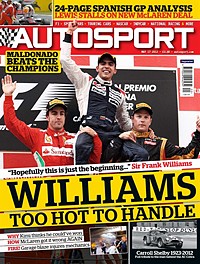 GP2 Barcelona - Not since 2009 had Dutchman Giedo van der Garde won at this level. Finally, during the Spanish GP weekend, the Caterham Racing man delivered a win in the feature race. In the reversed-grid sprint race, Luiz Razia took his second win of the year for Arden. Simon Arron saw all the action.

GP3 Barcelona - The series got underway at Barcelona last weekend and one of the pre-season favourites, Mitch Evans, began in perfect style with a race-one win for MW Arden. In the second encounter, Lotus racer Conor Daly, son of former F1 racer Derek, broke his victory duck after a tricky 2011 season.

Superstars heads to Donington - Andrew van Leeuwen examines the Italian-based touring car championship and reveals a series that's packed with hairy cars and star drivers - many of them ex-F1 racers. That's reason enough to head to Donington Park this weekend for the series' British round, he says.

Sports Extra - The national team reveals that a plan to revive the Great & British racing festival package is under way and reports on the last weekend's fabulous Monaco Historique event around the rain-lashed Monte Carlo streets.

From the archive - World Rally hero Colin McRae remains the only Briton to win the prestigious Tour de Corse. Here, the late, great Scot's former co-driver Nicky Grist looks back on their victory for Subaru in 1997.

Race of my life - Belgian veteran Eric van de Poele recalls the Spa 24 Hours in 1987 - a race he won for BMW despite having to make mid-race flights, pedal another M3 in Germany the same weekend and incur the wrath of the local police.