Jenson Button is thriving at McLaren in his second year with the British team. Three wins, second place in the drivers' championship standings, with two races remaining, are testament to a driver who has more than delivered.

The 2009 world champion recently sat down with AUTOSPORT F1 editor Edd Straw to explain why he loves driving for McLaren and how he's performing better than ever. There's also the small matter of out-scoring his team-mate Lewis Hamilton, a man expected to have had the upper-hand since they first paired-up at the start of 2010.

To corroborate the analysis, grand prix editor Mark Hughes adds his own expert opinion on what has made Button's performances so noteworthy this season - getting the best out of the new Pirelli tyres appears key to his speed and tactical nous. 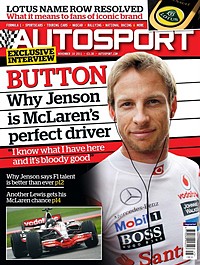 Paddy Lowe - Adam Cooper reveals the personality behind McLaren's technical director Paddy Lowe, only the fourth man to hold down the position at the famous team in the past 30 years.

WTCC Tianma - The penultimate round of the global tin-top series decamped to the tiny Chinese circuit of Tianma. Mark Glendenning watched Alain Menu and Yvan Muller rack-up two more wins for Chevrolet and the Frenchman pull clear in the title race.

World GT1 San Luis - The Argentinian volcano circuit produced fireworks of its own as Dutch youngsters Yelmer Buurman and Francesco Pastorelli sprung a surprise with a double win, while Nissan pair Michael Krumm and Lucas Luhr made sure of the drivers' title by finishing second in the first race. Peter Mills recorded all the drama.

Rally GB preview - With an expanded route into classic mid-Wales stages Clocaenog, Gartheiniog, Dyfi and Dyfnant, this year's WRC title showdown between Sebastien Loeb and Mikko Hirvonen will be a classic. David Evans previews the action, reveals who to watch out for and drives a few of the stages in Kris Meeke's Mini WRC recce car.

From the archive - Twenty years ago this month world rally giants Juha Kankkunen and Carlos Sainz headed to the RAC Rally locked in battle for the title. Finn Kankkunen won the rally for Lancia to secure his third title ahead of Toyota nemesis Sainz.

Race of my life - German sportscar racing veteran Jurgen Barth tells Henry Hope-Frost why his 1977 Le Mans 24 hours victory for Porsche after an epic fightback in the Martini 936/77 was his favourite race.