The #91 Porsche 911 RSR-19 Bruni shared with Richard Lietz and Federic Makowiecki emerged on top in the last-ever GTE Pro race at the Circuit de la Sarthe, as Le Mans organiser the Automobile Club de l'Ouest confirmed on the eve of the event that the class will be dropped at the end of the 2022 World Endurance Championship season.

The trio crossed the line 42 seconds ahead of the #51 AF Corse-run Ferrari 488 Evo driven by James Calado, Alessandro Pier Guidi and Daniel Serra to score Porsche’s first GTE Pro win at Le Mans since 2018, but that eventuality had looked unlikely during the early phases of a race Corvette looked set to dominate.

The #63 C8.R held a commanding lead until a broken left-rear suspension caused a lengthy spell in the garage and eventually forced its retirement, meaning the #91 Porsche crew ran fourth at the halfway point in the race.

Then Porsche’s #92 car suffered a major tyre blow-up while leading in the 16th hour that heavily damaged its front bodywork, before Francois Perrodo's AF Corse LMP2 car pushed Alexander Sims's #64 Corvette that had been delayed by an unscheduled brake change into the wall on the Mulsanne straight.

Bruni, Lietz and Makowiecki were then able to defeat the #51 Ferrari after it suffered a right-rear puncture late in the race, as the #52 Ferrari that had also suffered a puncture in earlier contact with a prototype at Tetre Rouge completed the podium.

Now a four-time Le Mans class-winner, Bruni said luck is part of what makes Le Mans a legendary race, highlighting his own defeat in 2015 as a Ferrari driver when his car was struck by a late gearbox problem while locked in a tight battle with Corvette.

“For sure Corvette was unlucky, but #92 had a flatspot, and this created the damage of the car,” the Italian told Autosport.

“In the end Le Mans chooses [whether] you win or not. This is the special thing of Le Mans. Sometimes she recognises you, other times not. 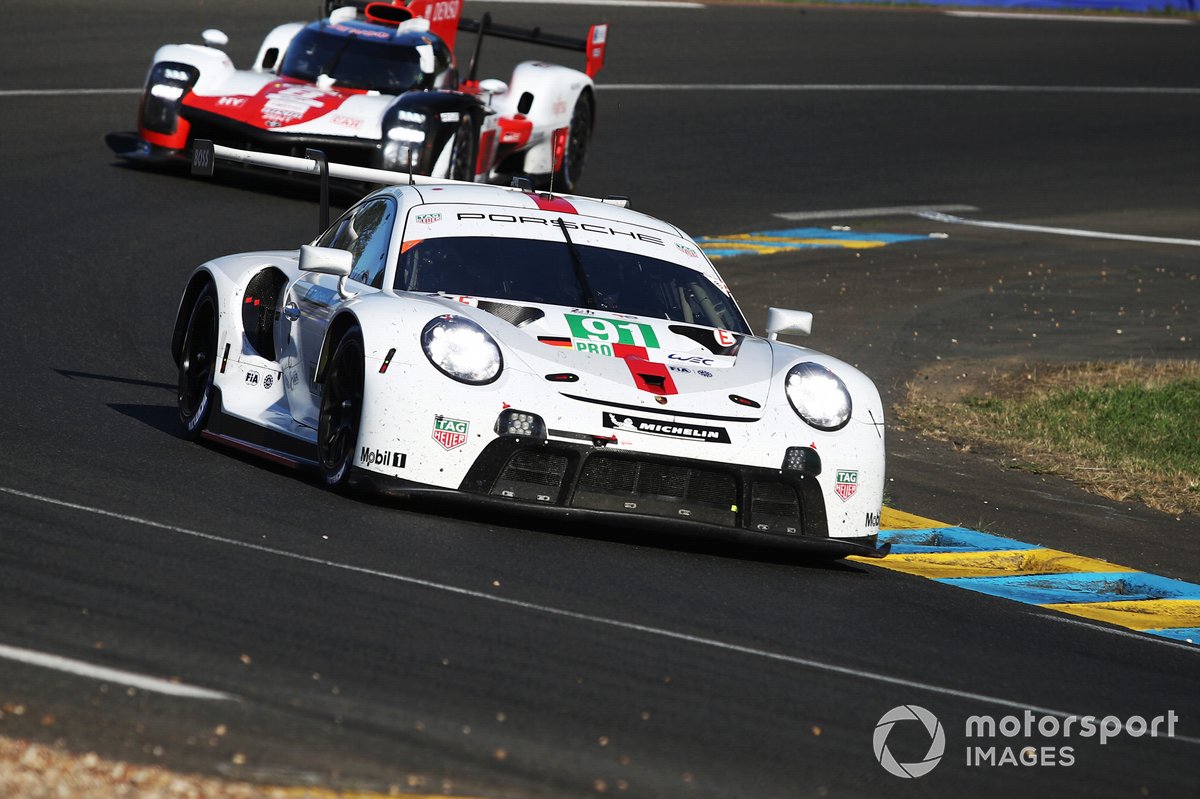 “I remember in 2015, with 25 minutes to go the gearbox broke and Corvette won. What can I say? I was 50s ahead. And the points we lost cost me the [WEC] championship.

“Sometimes I’ve been very unlucky, but this is a special thing about Le Mans. You either like it or you hate it. Me, I like it.”

The sister #92 car of Michael Christensen, Kevin Estre and Laurens Vanthoor was eventually classified a distant fourth in the seven-car GTE Pro class, a lap behind the #52 Ferrari of Miguel Molina, Antonio Fuoco and Davide Rigon.

Vanthoor said he was confident about the victory chances of the #92 Porsche until the car suffered a spectacular puncture approaching the Mulsanne corner with his team-mate Christensen at the wheel, forcing the latter to pit for repairs after an excruciatingly slow in-lap.

“We were in quite a dominant position [at the time of the puncture],” he told Autosport.

“I felt like we had it under control, also strategy-wise we were a step ahead.

“We were getting more and more competitive as well, so it was looking very promising, even if it was far from over.

“The puncture was a crazy mix of a lot of stuff together. We had a slow puncture in the corner before, and so we had a flatspot.

“Then the tyre delaminated and destroyed the car, and that was pretty much the end of our race. 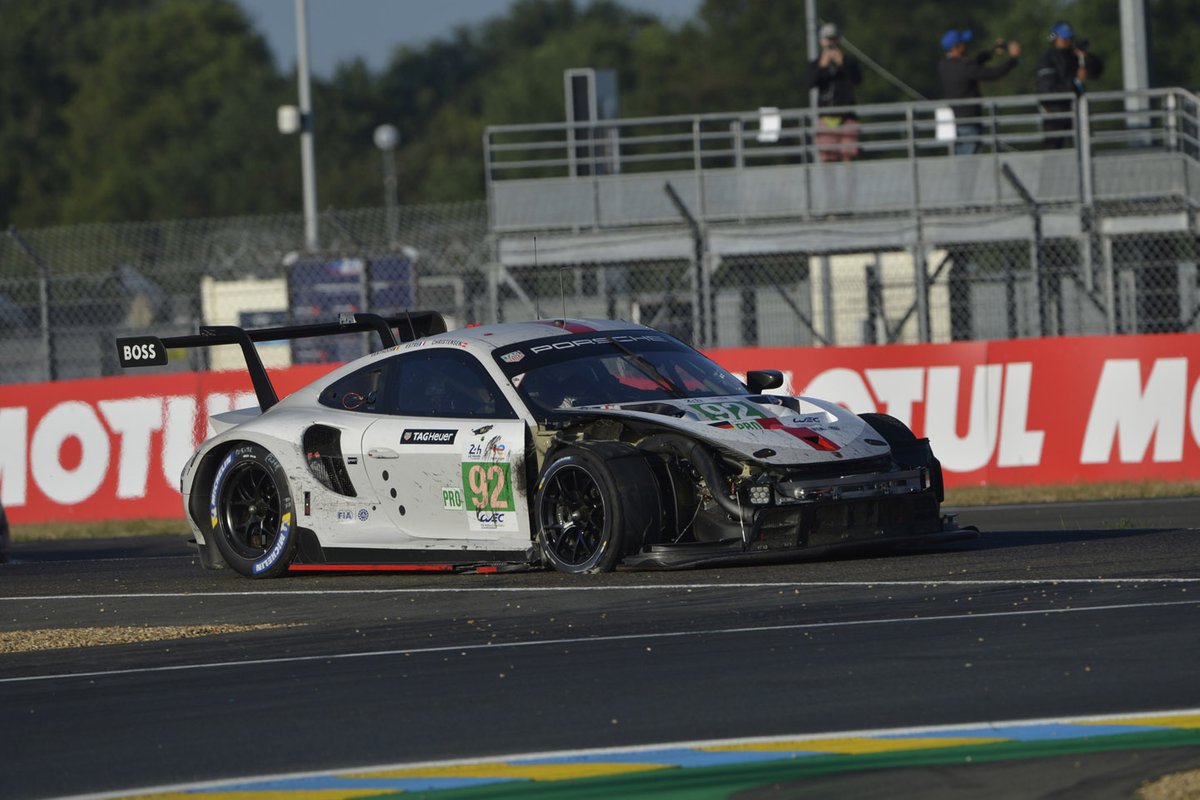 “[Without that] it’s always easy to say in hindsight, and it was still going to be a big fight, but I was really confident we were going to do it.

“I’m not gonna lie, I’m disappointed we didn’t win, but at least Porsche won, so I’m happy for the guys and for the #92 crew.”

Ferrari received a major turbo boost pressure reduction ahead of Wednesday’s practice - which was only partially reversed before the race - and James Calado was particularly vocal about how it had hurt Ferrari's chances of challenging its two factory rivals in the 90th running of Le Mans.

After finishing second in class in the #51 Ferrari 488 GTE along with Alessandro Pier Guidi and Daniel Serra, Calado said he had reasons to be happy with the result - but added that the Italian marque never had a realistic shot at beating Porsche for victory.

“Obviously it was clear that the pace wasn't there throughout the whole race, everyone can see that,” he told Autosport.

“However, no real mistakes, no real dramas, we tried to keep the car in one piece and step by step we worked our way up the front.

“We actually got quite unlucky with slow zones but that is part of the game. You win some, you lose some."

“[Even without the puncture], we still probably wouldn't have won on speed alone because they [Porsche] were holding back. The moment we started pushing, they started pushing. But I'm happy, two and three for Ferrari is a great result.”