The #7 Toyota has taken a controlled lead in the Le Mans 24 Hours at the four-hour mark, as a first safety car intervention disturbed several class battles.

After a hectic opening hour, the 2021 edition settled down over the next few hours, with quadruple-stinting Mike Conway commanding the race in the #7 car until his handover to Kamui Kobayashi.

It wasn't all plain sailing for Toyota however, as Conway had to abort one of his stints for a right rear puncture. In the #8 car Sebastien Buemi also had to pit earlier than planned after contact with an LMP2 car, which prompted Toyota to investigate possible rim damage.

Buemi had been gradually closing a one-minute gap down to some 40 seconds, but the gap then increased again with both drivers on different pitstop strategies, as Buemi handed over to Brendon Hartley.

In the fourth hour the race saw its first safety car intervention due to a hard hit for Marcos Gomes in the #98 Aston Martin, who went into the tyres at Indianapolis.

Brazilian Stock Car regular Gomes managed to step out of the heavily damage car under his own power, but the Aston, which had been running in the top three in GTE Am, was the race's first retirement.

At the restart Kobayashi led the way with a 1m13s gap to Hartley. At the four-hour mark, that gap dropped to eight seconds with the chasing #8 car still due a pitstop.

The #36 Alpine A480-Gibson of first Nicolas Lapierre and then Andre Negrao followed another 1m13s in arrears, after it had lost time at the start due to Lapierre's spin in the wet.

Both Glickenhaus cars struggled for pace after a rough opening phase. The #708 car, which had punted off the #8 Toyota at the start, ended up a lap down behind the LMP2 frontrunners in ninth. The #709 sister car followed half a minute further down the road in 13th place.

In LMP2 drama struck for erstwhile leaders JOTA. In the #38 Oreca-Gibson Antonio Felix da Costa had been dominating the race across the first 2h30, but shortly after taking over the car Anthony Davidson went off in the run up to the Dunlop chicane, possibly getting caught out by light drizzle and a spinning GTE Am car in front of him. 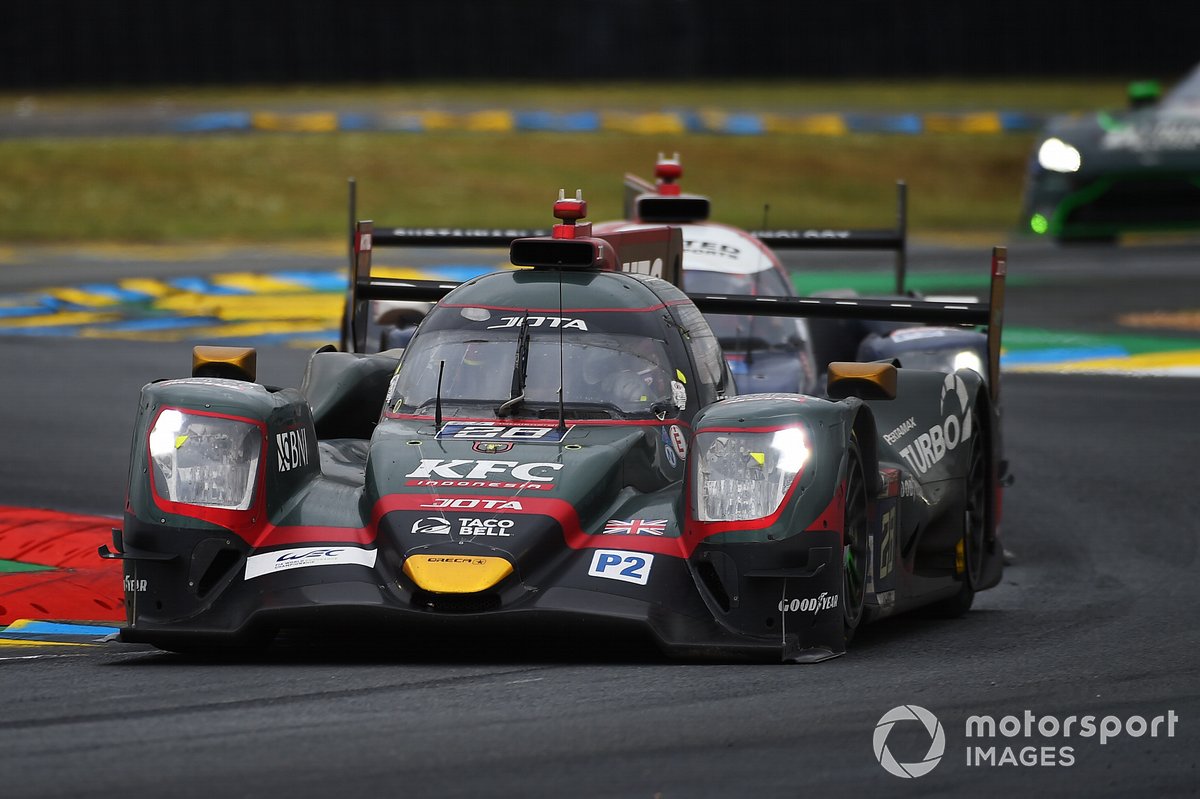 That handed the class lead to the #26 G-Drive Aurus of Franco Colapinto, who had to defend his slender lead against Racing Team Nederlands's Job van Uitert. Van Uitert had taken over from fellow Dutchman Giedo van der Garde, who had masterfully taken the #29 Oreca from a 16th starting position to third.

The safety car triggered several pitstops which shook up the LMP2 running order but fortunately most frontrunners ended up in the same train.

At the restart the #28 JOTA Oreca-Gibson of Tom Blomqvist, which he shares with Stoffel Vandoorne and Sean Gelael, took the lead and then built up an eight-second lead by the four-hour mark.

Colapinto and Van Uitert dropped back to fourth and fifth respectively.

In GTE Pro Ferrari gained control of the race, the AF Corse-run #51 and #52 cars either swapping positions or running in formation for much of the opening hours.

In the third hour the #52 car opened up a small lead on the #51 entry, while WeatherTech's Earl Bamber initially held on to his #79 Porsche's third position in class, which he had inherited from starting driver Laurens Vanthoor.

When Bamber handed over to Cooper MacNeil, Jordan Taylor climbed to third in the #63 Corvette C8.R after first passing the #91 works Porsche of Michael Christensen. Christensen moved up to fourth ahead of MacNeil.

The second factory #91 Porsche and the #64 Corvette were the victims of the safety car, losing over a minute on their competitors.

The polesitting #72 HubAuto Porsche, which was turned around at the start of the race, struggled to make inroads on the rest of GTE Pro field and trailed by over half a lap after receiving a drive-through for track limits violations.

In GTE Am TF Sport's Felipe Fraga starred in his opening stints, taking the #33 Aston Martin from outside the top 10 to the front before handing over to Dylan Pereira.

After Gomes' crash, Pereira caught an earlier safety car than his rivals, which handed him a 1m15s lead on the rest of the field.

He then pitted to hand the reins over to Ben Keating, dropping the car back behind the #83 AF Corse Ferrari of Francois Perrodo.

The fight for third in class raged on between Giorgio Sernagiotto in the #47 Cetilar Ferrari and Scott Andrews in the #57 Kessel Racing Ferrari.