The Aston Martin team was under pressure ahead of the Le Mans 24 Hours in 1959. After a decade of trying and three second places, owner David Brown was determined to win one of sportscar racing’s greatest events.

In association with Avon Tyres

The regulation switch to three-litre engines for 1958 should have played into Aston’s hands, the move essentially banning the bigger machines that had previously outmuscled the British marque. But success had evaded it in the face of tough opposition from Ferrari.

However, for the 1959 season, racing manager Reg Parnell had three of designer Ted Cutting’s DBR1/300s at his disposal, plus there was a privateer example. The Avon-equipped works Aston Martins were modified specifically for the event, with rear-wheel spats and raised rear bodywork to boost speed on the Mulsanne Straight.

They were still slower than the three powerful factory Ferrari 250 Testa Rossas, but the Aston Martins handled better and the team had Stirling Moss leading the driver line-up.

Team boss John Wyer, later to find success with the famous Gulf Ford GT40s and Porsche 917s, set Moss the task of taking the fight to the Ferraris from the start. This at a time when cars normally needed to be treated with care if they were to last the gruelling 24 hours.

“I don’t think Stirling ever thought he was going to finish that race,” Cutting told Autosport in 2009. “That wasn’t his job. There was a feeling among us that the Ferraris had a flaw that season – overheating – and we wanted to take advantage of that.” 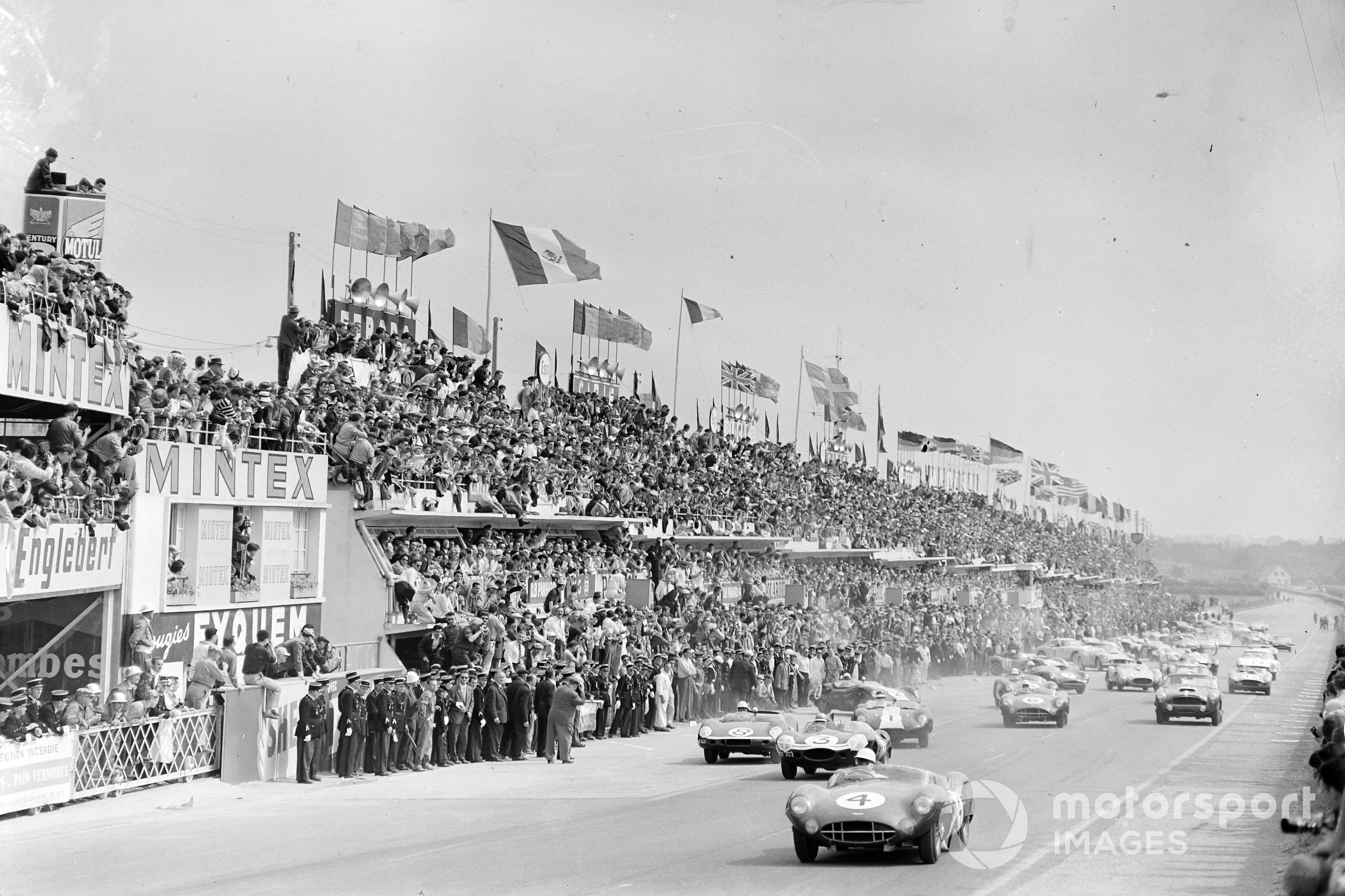 Moss’s car, which he shared with Jack Fairman, was also fitted with the older four-bearing version of the three-litre straight-six engine. It was more powerful than the seven-bearing powerplants in the other two cars, at the probable expense of reliability. Moss later claimed he “wasn’t planning on retiring” but did admit to relishing the chance to drive hard rather than cruise round.

That was the not the case for the other two cars. While Jean Behra’s Ferrari would set the fastest lap of 4m00.9s, Roy Salvadori/Carroll Shelby were given a target time more than 10s slower, with Maurice Trintignant/Paul Frere advised to run even more conservatively in the third DBR1.

Moss duly shot off at the start, making the most of his Aston’s chassis and Avon rubber, to lead. He dragged the Ferraris along, Behra coming past during the second hour and the Aston slotting into his slipstream as Moss battled for supremacy. “It was Moss versus Ferraris with a vengeance,” reported Autosport’s Gregor Grant.

Moss had regained the lead before the end of his stint. Fairman couldn’t keep up Moss’s pace when he climbed aboard, but by the time their DBR1 succumbed to engine failure, the Cliff Allison/Hermano da Silva Ramos Ferrari had already retired. The Behra/Dan Gurney Testa Rossa, which had done much of the early leading, didn’t make it to half distance either.

As others hit trouble, good pitstops and consistent lapping helped Salvadori/Shelby climb from eighth at the end of the first hour to the lead after seven.

Delays during the night allowed the remaining works Ferrari of Olivier Gendebien and Phil Hill to claw its way into the lead. The 1958 winners had not been sucked into the early fighting and now looked like restricting Aston to a frustrating 2-3. 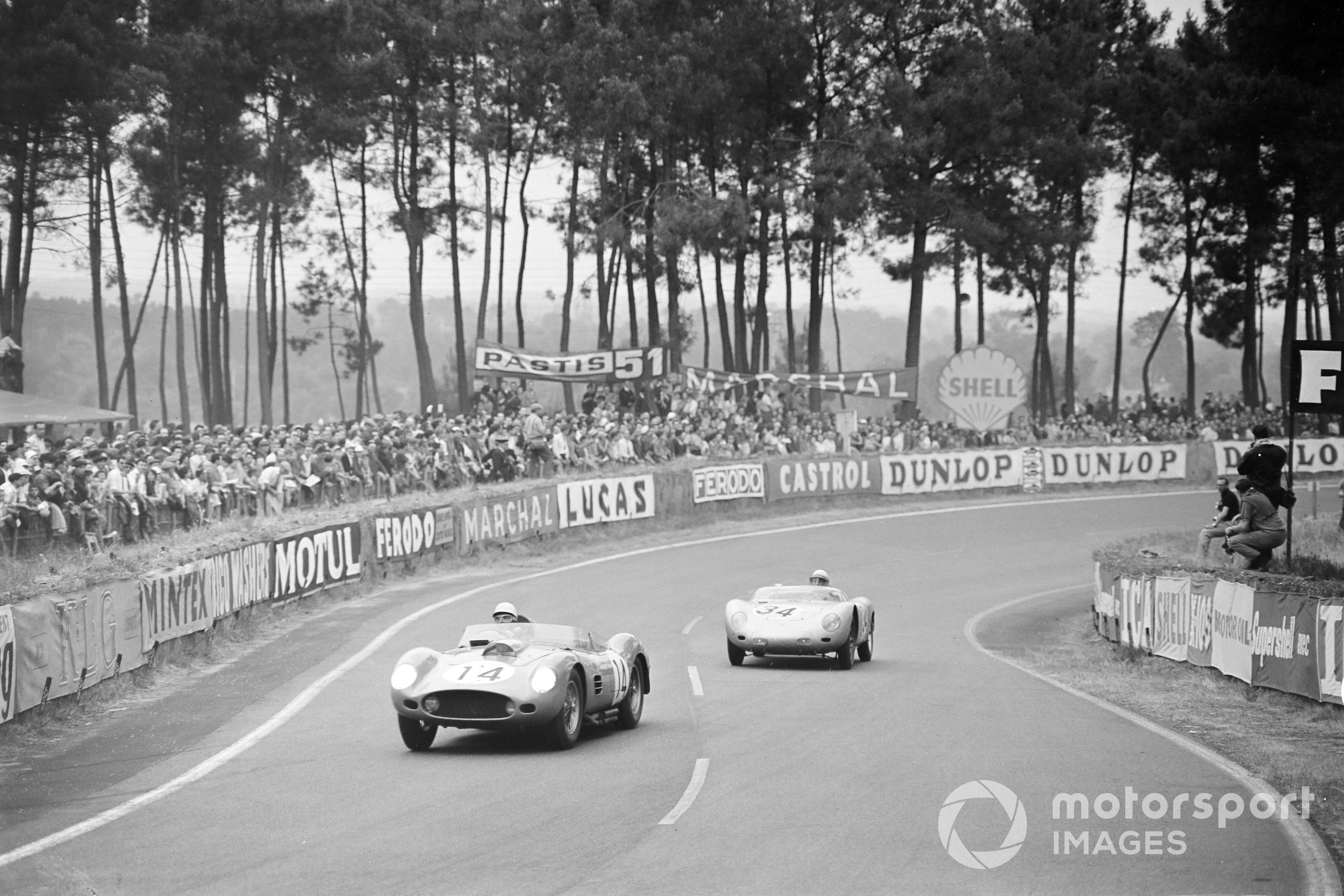 The British car’s challenge was made harder because Salvadori was suffering with a burned right foot thanks to a rerouted exhaust and a cold, while Shelby was (secretly) concerned about the heart problem that would force his retirement from driving the following year.

But with four hours to go the increasingly sick-sounding Ferrari finally succumbed to overheating. Salvadori took the lead and slackened his pace, driving the maximum time allowed despite his injured foot before handing over to Shelby for the run to the finish.

“The final three hours seemed like an age to Aston Martin,” reckoned Grant, but there was no threat from behind. The third and fourth-placed GT Ferraris were more than 20 laps in arrears.

The number five DBR1 crossed the line after 24 hours to complete 323 laps, one more than its sister car, to secure Aston Martin’s first – and, more then 60 years later, only – outright Le Mans win. Only 13 of the 53 starters finished the gruelling contest.

Not only was it Aston’s greatest motorsport moment, the result set the British firm up for a championship showdown with Ferrari and Porsche. At Goodwood another brilliant drive from Moss, who had previously persuaded Brown to send a car to the Nurburgring where Stirling had produced one of his greatest drives to take a crucial win, secured the world sportscar championship for the Avon-shod Aston Martin team. 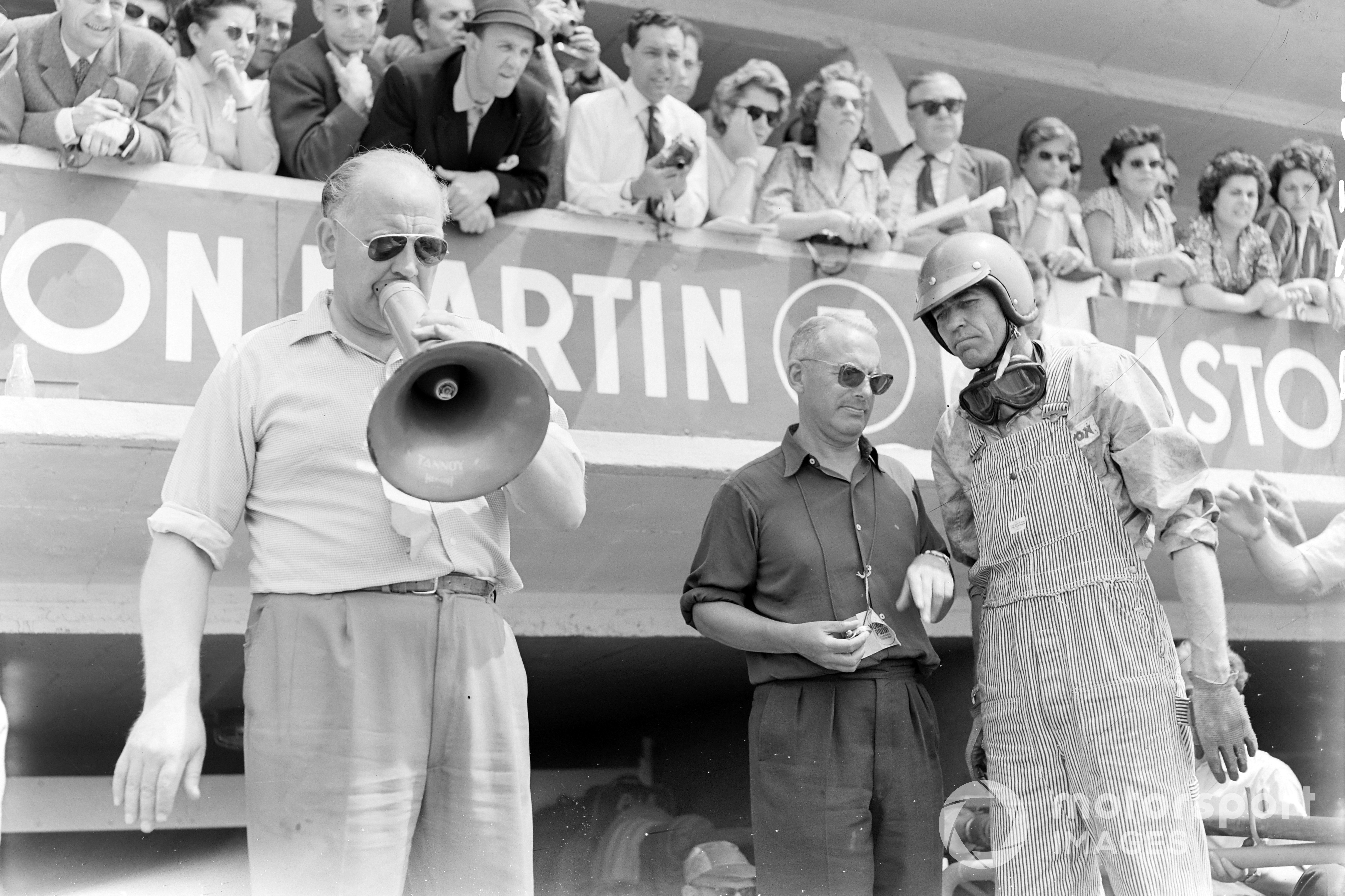 Carroll Shelby (Aston Martin DBR1), 1st position, waits in the pits for the car to come in with Reg Parnell, on megaphone and Team Owner and Chief Designer, David Brown, 1959 Le Mans 24 Hours