Power took the lead with a move around the outside of Takuma Sato on lap 30, and retained control from that point on.

He was initially out of sequence with the Japanese driver; the huge gap that Power was opening being potentially mitigated by the fact that he would have to make his second stop significantly earlier than Sato.

But the 10.5-second buffer that the Penske driver created proved to be enough for him to leapfrog Sato follow the latter's stop.

Sato's minor discomfort with the harder black tyres during his middle stint then prevented the AJ Foyt driver from mounting a response as Power drove away again at the front.

Indeed, at that point it was all Sato could to do hang with the top five, and his mid-race fade brought Power's team-mate Helio Castroneves and Andretti's Ryan Hunter-Reay into the picture.

Power still held a solid lead, but their opportunity to get within striking range came when Charlie Kimball tagged the wall and triggered the first caution period on lap 78.

Virtually the entire field pitted in unison under yellows, during which Power retained his advantage, but the real talking point of the race came at the restart a short time later.

IndyCar had instigated a new restart procedure coming into the weekend, and when the green came, it was earlier than Power claimed to be expecting it. The resultant concertina caused havoc behind him, and resulted in both Marco Andretti and Jack Hawksworth crashing out.

The bottleneck also had ramifications for Castroneves, who checked up behind Power and consequently lost second place to Hunter-Reay. The pair remained in that order to the finish.

Scott Dixon's title defence began with a fourth place on an afternoon where the Kiwi was not especially happy with his car, while Simon Pagenaud was one of the few beneficiaries of the restart confusion and gained three spots to finish fifth.

Just behind him, Tony Kanaan began his Ganassi career with a sixth place after struggling with a fuel problem that left him with restricted power for much of the race. Sato ended up seventh. 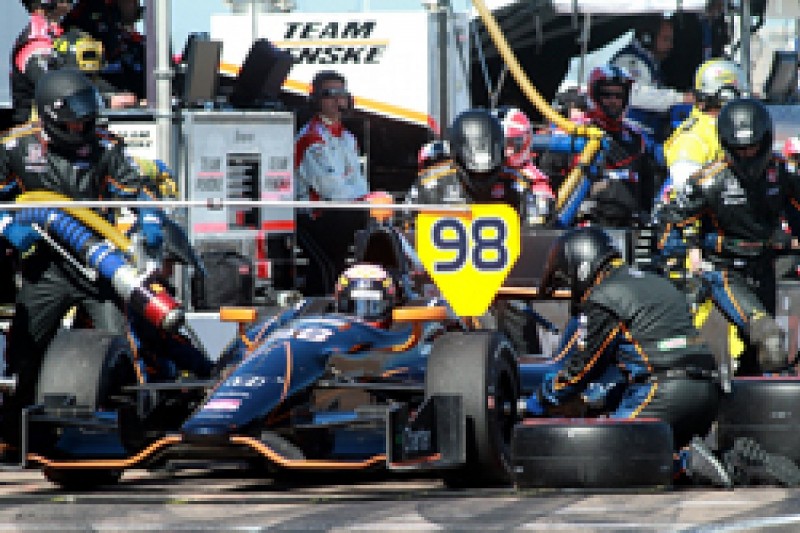 Of the four rookies, Hawksworth looked especially lively before his early exit; the Brit's exploits including a neat lunge down the inside of Juan Pablo Montoya mid-way through the race.

Montoya, for his part, had always cautioned going into the weekend that he expected his first street course event in six years to be a learning experience, and the new Penske arrival spent much of the day on the fringes of the top 10 before eventually finishing 15th.

Among the other performances worthy of note were those of Josef Newgarden, who climbed from last to ninth, and Mike Conway, who ran as high as third before confusion over when to pit under caution resulted in him inadvertently overtaking the pace car, attracting a penalty that dropped him to an eventual 16th.