The AJ Foyt driver topped both of his preliminary qualifying stages on his way to the Fast Six, and then put pole beyond the reach of his rivals with a 1m01.8686s effort, nearly 0.3 seconds faster than closest threat Tony Kanaan.

"It's a fantastic day," Sato said. "You can't ask for a better start to the season."

One of the most impressive elements of Sato's performance was that he was one of three drivers to start the second phase on red tyres, with everyone else still on wets, yet while Ryan Briscoe and Mike Conway subsequently had their rubber go off when the track was at its best, Sato set fastest laps three times in the final five minutes.

While unable to match Sato's eventual pole lap, Kanaan said that he was pleased to get his Ganassi career off to a good start.

"It feels good not to see 17 cars in front of me at the start," he said. "I think it's three years since I made the Fast Six.

"Qualifying was a bit of a lottery I think - it was probably fun for the fans, but for us it was quite hard, so I'm happy."

Ryan Hunter-Reay and Will Power will share the second row ahead of reigning series champion Scott Dixon and Marco Andretti, giving engine manufacturers Chevrolet and Honda an even split of the top six.

Thunderstorms accompanied by a tornado warning caused the session to postponed by more than three hours, and meant that the drivers were faced with a wet but constantly drying track.

The changing conditions claimed a few early casualties: both Graham Rahal and James Hinchcliffe were stripped of their two fastest times in the first qualifying phase for spinning and causing red flags, although Hinchcliffe's consequent demotion from the top six paid dividends for Ryan Briscoe, who had gambled on staying out with a damaged wing and earned a progression to the next phase as his reward. 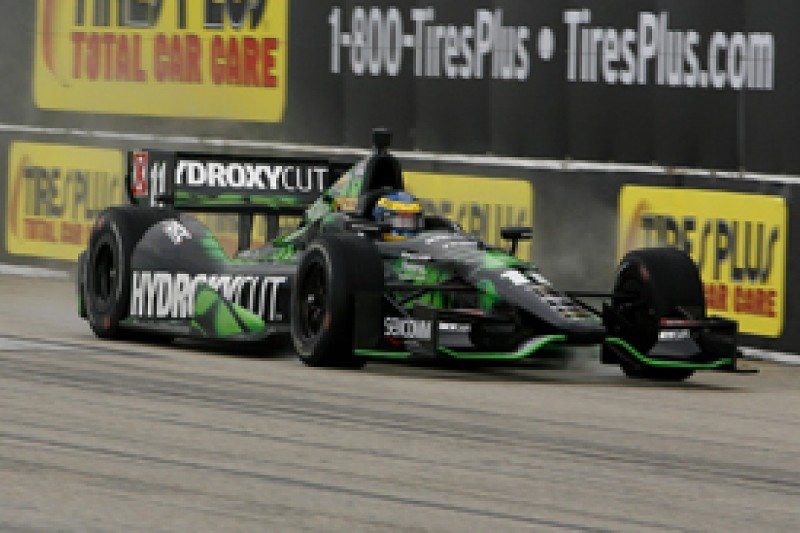 Also compromised by the early proliferation of reds was Sebastien Bourdais, who only managed to squeeze in one flying lap.

"Is that qualifying?" he said. "It's one lap. It's a joke. The conditions are fine. If we're going to go qualifying, we need to have a fair shot. And we didn't."

Juan Pablo Montoya's single-seater return began quietly, with the Penske recruit admitting that he struggled to adapt to the conditions.

He was ninth at the end of the first phase, falling three spots short of progressing to the next session, and setting himself up to start from the rear half of the field.

"It is what it is," he said. "I haven't driven in the wet in a long time and we didn't have occasion to do it during testing. It sucks, but it is what it is."