Rahal Letterman Lanigan Racing's Graham Rahal believes IndyCar has found a better package for superspeedways such as the Indianapolis 500, after testing revised aerodynamics and tyre compounds

This year's Indianapolis 500 race was criticised, with the new-for-2018 universal aerokit replacing the drafting pack racing of previous years with single-file running.

Teams such as RLLR had made their concerns clear early in the Month of May, but IndyCar resisted making downforce changes before the race.

IndyCar has since conducted significant testing on several areas of its car including the front wing, rear mainplate as well as putting the underfloor under the microscope for revision.

Rahal, Will Power, Scott Dixon, Alexander Rossi, Tony Kanaan and Ed Carpenter all tested at Indianapolis on Wednesday, with the RLLR driver believing progress has been made.

"I felt like the series made good gains with the aerodynamics," Rahal told Autosport, "but the tyres were the majority of the gain.

"Bill [Pappas, VP of competition], Tino [Belli, head of aerodynamics] and Jay [Frye, president of competition and operations] all did a really good job of identifying the things that could help.

"But it's tricky because the rear wing mainplane is so small that it's not that effective, so maybe a slight redesign of that - and also maybe the front wing - is ultimately the best way to go. I'm not sure."

Rahal said the revised Firestone tyre compound was the biggest factor in the improvement.

He added that a switch back to the old compound reminded drivers of the series of unassisted crashes that occurred in this year's Indy 500.

"With the old tyre you got this death-plow of understeer toward the wall when you ran in traffic. It would just let go aggressively.

"We actually ran that toward the end of this test today, and all six of us walked into the meeting room afterward saying, 'Holy crap'.

"This new Firestone, it starts to understeer but it's progressive, you can just breathe the throttle and it responds, and you can come off the turn with enough momentum to pass, particularly with the higher downforce configuration." 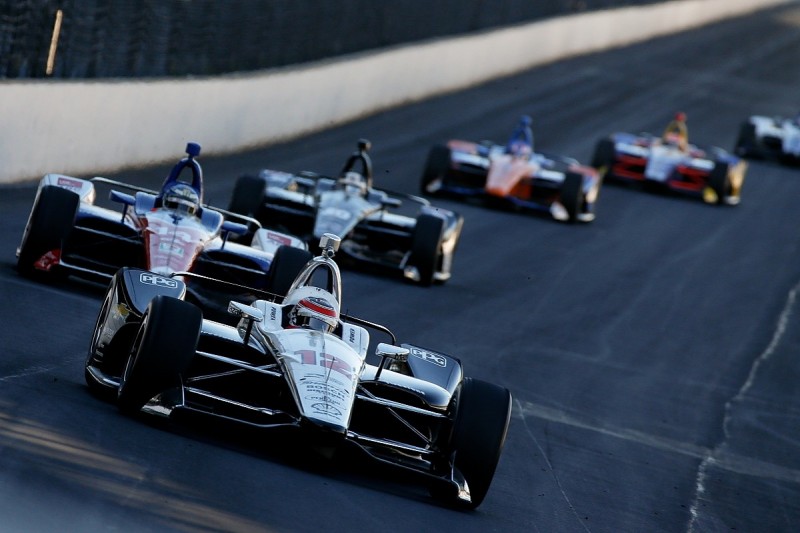 The drivers ran in a group for the last three hours of testing with a focus on aerodynamic parts, with two full race-stints also completed as the field assessed the impact of running in different positions.

Indianapolis' oval is more flat than the other two superspeedways on the IndyCar calendar, Pocono and Texas, but Rahal believes the gains in testing will still apply.

"This configuration directly relates to Pocono, so bam, we found things we can apply right away," he said.

"This package will also help eliminate some of the late-corner understeer out of Turns 1 and 2 at Texas, definitely. "So overall it was a very positive day, I'd say."