Contact from Hildebrand on lap 162 of the 200-lap race damaged the left-rear wheel pod on Castroneves' Team Penske Dallara-Chevrolet.

He was able to pit and change the entire rear-wing assembly under a yellow, but could finish only 11th.

When asked what happened, Castroneves said: "Go ask him. He was behind so I have no idea.

"I felt a bump and basically that put us in a situation that was almost impossible to come back from.

"I have to be careful what I say so I don't regret it later on.

"With that incident we missed an opportunity to fight for the win.

"I'm very disappointed in the way we ended up. It's just not reflective of the car that we had and the pitstops that we had."

Castroneves said the fact Hildebrand was only making a one-off appearance at Indy made the incident more painful.

"Especially in a race that is so important and for someone who races once - I can understand it if it's someone who's fighting for the lead - but, come on, it's ridiculous," he said.

"I've got to go apologise to him," Hildebrand said.

"He stayed put longer, so I changed direction and caught him and flipped him on the bumper pod.

"I feel really bad about it. I know it screwed up his race.

"He deserves another serious shot at this, but at the end of the day, it's all so close out there."

Bell hit Castroneves as he exited the Penske pit and bounced into Hunter-Reay.

Both Andretti drivers had damage but Castroneves' car was unscathed.

"We had a phenomenal pitstop and when Townsend Bell came and there wasn't enough time to stop, he bumped into my left rear but the car was undamaged," Castroneves said. 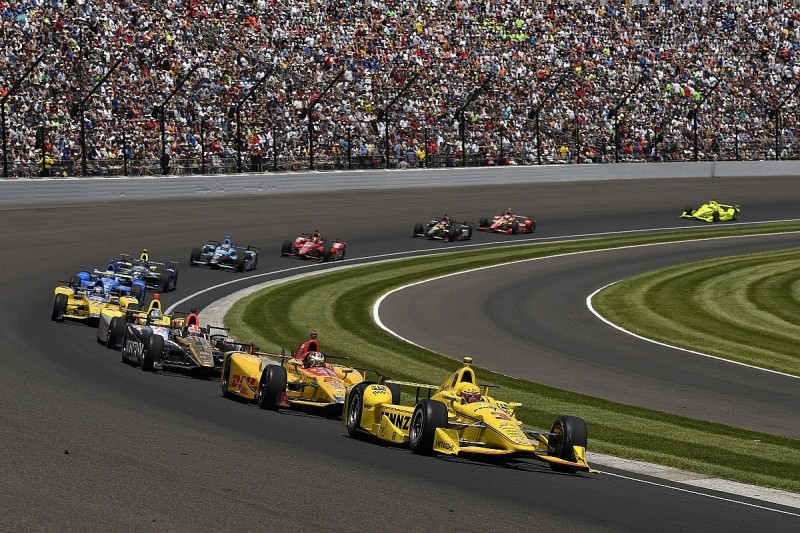