Since 2014, no driver has attempted the marathon feat of contesting the Indianapolis 500 and NASCAR's Coca-Cola 600 on the same day. Tony Stewart pledged never to attempt 'double duty' again after his efforts in 1999, but as the 1997 IRL Indycar champion explained to Autosport for the 24 May 2001 magazine, the lure of Indy glory was too great to ignore

Not since the days when AJ Foyt was the ultimate American racing hero has one driver done so well in so many categories. Tony Stewart is a throwback to the old days of motorsport in the United States, when a true racer was not afraid to climb into any type of car and take on the best the sport had to offer.

This weekend, Stewart will prove his all-rounder qualities once again when he returns to the Indianapolis 500. Among the star names at the Brickyard this year, his is the one that stands out. The former Indy Racing League champion turned NASCAR ace could not resist the chance to drive for the crack Chip Ganassi Racing squad - even if he has the Charlotte 600 Winston Cup race to compete in on the same day!

That Stewart is following in the tradition of someone like Foyt is praise indeed. Foyt was an Indy legend, but would head to NASCAR to beat the stock car drivers at their own game, and then fly over to Europe and win the greatest sportscar event in the world, the Le Mans 24 Hours.

Stewart was already an Indycar (now Champ Cars) star before he ever headed to NASCAR. He qualified on the front row for the 1996 Indy 500 and moved up to pole position when his team-mate, Scott Brayton, was killed in a crash before that year's race. Stewart competed at the Brickyard four times - up until 1999 - finishing fifth in 1997, the year he won the IRL.

Having conquered that series, he searched for a different motivation and in 1999 decided to test himself in America's strongest racing championship, the NASCAR Winston Cup. That year, he joined John Andretti as the only driver to race in the Indy 500 and the Coca-Cola 600 NASCAR race at Charlotte, North Carolina on the same day. He finished ninth at Indy and fourth at Charlotte, completing all but four laps at the Brickyard and all 600 miles at Charlotte.

Exhausted, he vowed he would never attempt such a feat again. Well, he has changed his mind.

"When I got out of the car, I might have said that I wouldn't do it again," he says, "but the next day, I had already made up my mind that I would do it somewhere down the road. It would just be a while before I did. 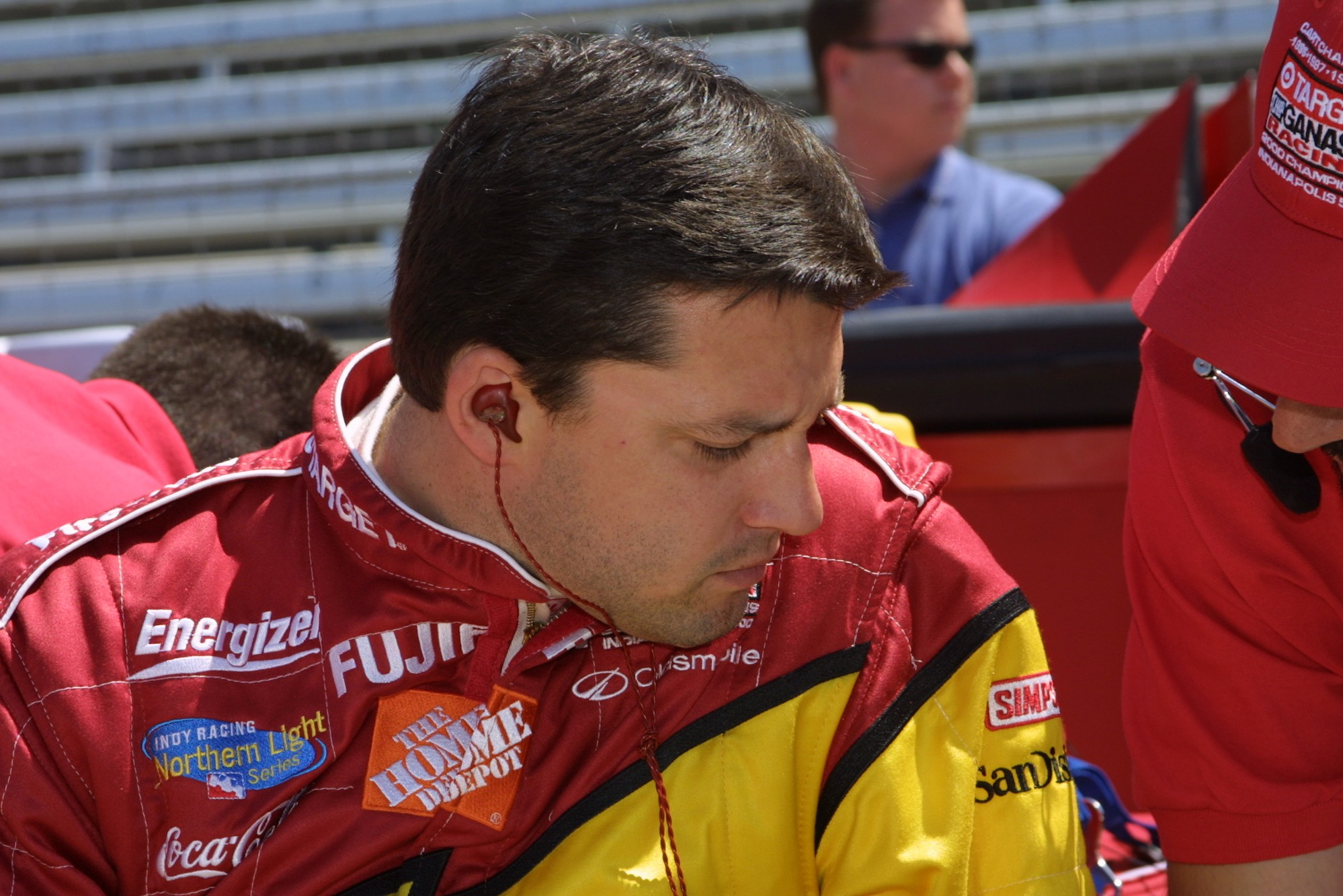 "I didn't realise I would do it this soon. That's a lot of racing in one day, but so is competing 106 events in one year. I used to do that all the time and not think a thing about it. I'm a racer. I'm just addicted to racing."

He will start on the inside of the third row for this year's Indy 500 after posting the seventh fastest speed in qualifying, with a four-lap average of 224.248mph. He believes he has his best chance at winning the race because he has returned with defending winners Chip Ganassi Racing. The CART team won the blue-riband event last year when Juan Pablo Montoya led 167 of the 200 laps.

"This was the perfect opportunity. I know that I have the best equipment out there. We have the best crew members and the right variables to do the job properly" Tony Stewart

"Tony Stewart is the consummate race driver," says Mike Hull, general manager for Ganassi. "He could drive any race car in the world. He and Jimmy Vasser complement each other because their driving styles are very similar; the feedback is very similar. It's actually unique. It's a pleasure to work with somebody who can race in all kinds of cars. It's just fantastic."

So, why would a driver with a legitimate shot at winning the NASCAR Winston Cup title compromise that opportunity by driving in another unrelated event on the same day?

Stewart, 29, is originally from Rushville, Indiana - about 45 minutes away from the Brickyard - and says he is saving a place on his resume for 'Indianapolis 500 champion'.

"I've had a great career, but I'm saving a place at the top of that for an Indianapolis 500 victory," he explains. "When you are a race car driver from Indiana, this is all there is and all you think about. To not have an opportunity to come back here would be devastating. But you want to come back with the right team. We are doing it the right way to win the race." 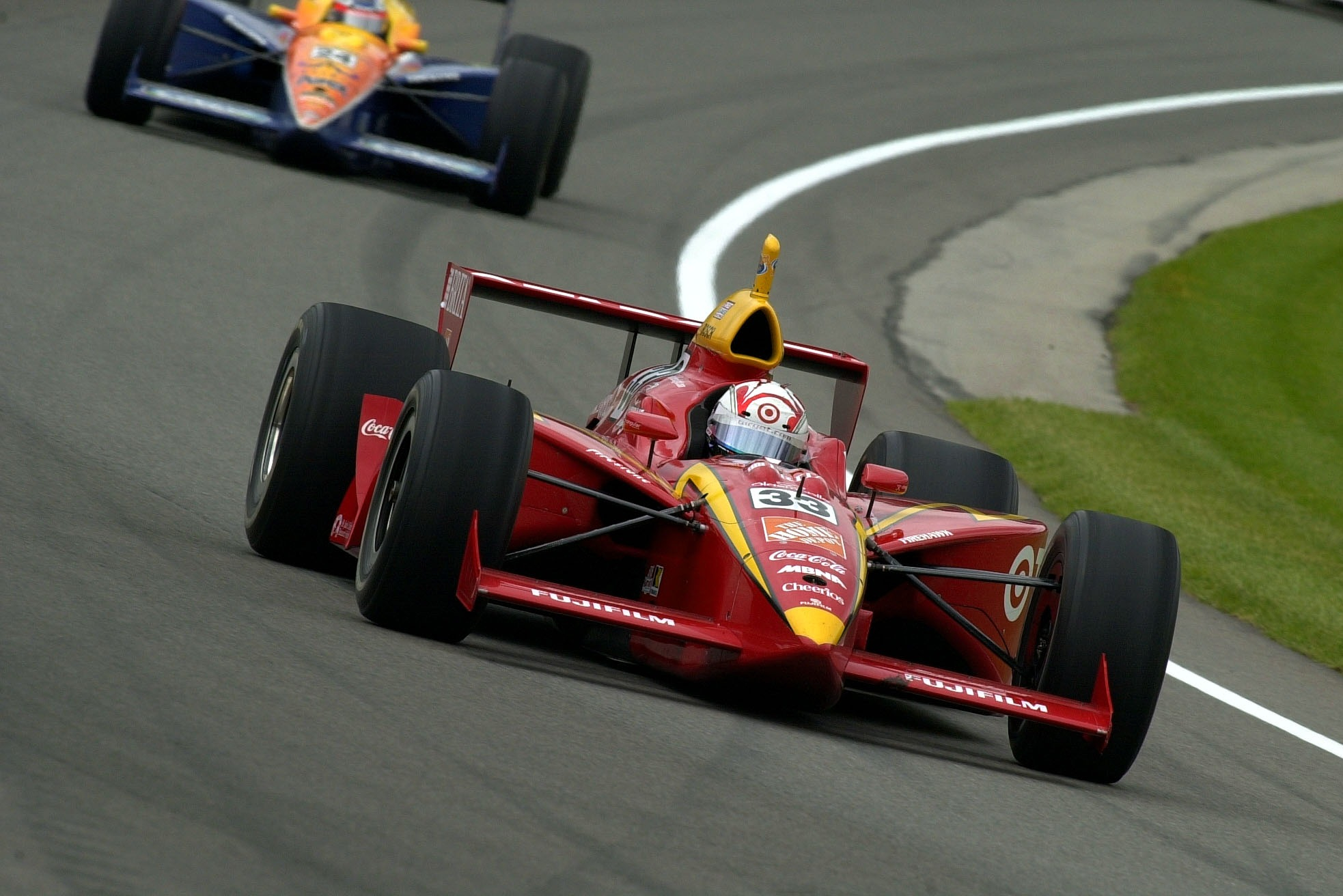 Stewart, who has 10 Winston Cup wins under his belt in just a little over two seasons, says the decision to join Ganassi for Indy came together very quickly.

"This was the perfect opportunity. I know that I have the best equipment out there. We have the best crew members and the right variables to do the job properly."

Stewart was one of the heroes of the IRL when he was racing in the Indycar series full-time. It has been three years since he left for NASCAR and he believes the quality of the competition in the IRL has increased dramatically in that time.

"The competition is a lot tighter and a lot tougher than it was here in years past," he says. "I'm really impressed with the series. I think there are a lot of good, quality drivers here. Look at the practice sheets and the times. The times are so close. How can you say this isn't competitive and it won't be one of the best months of May in years?"

The chance to win the 500 is tremendous motivation for Stewart. His NASCAR team owner, Joe Gibbs, realised this and that is why he is willing to share his talented star with the Ganassi squad.

"Joe is behind me 100% on this," says Stewart. "He knows what it means to me to win this race. He was a little tentative at first, but when he realised it's my dream, he opened up to it. He knows this is a dream of a lifetime for me."

On 27 May, we will see if the dream comes true. 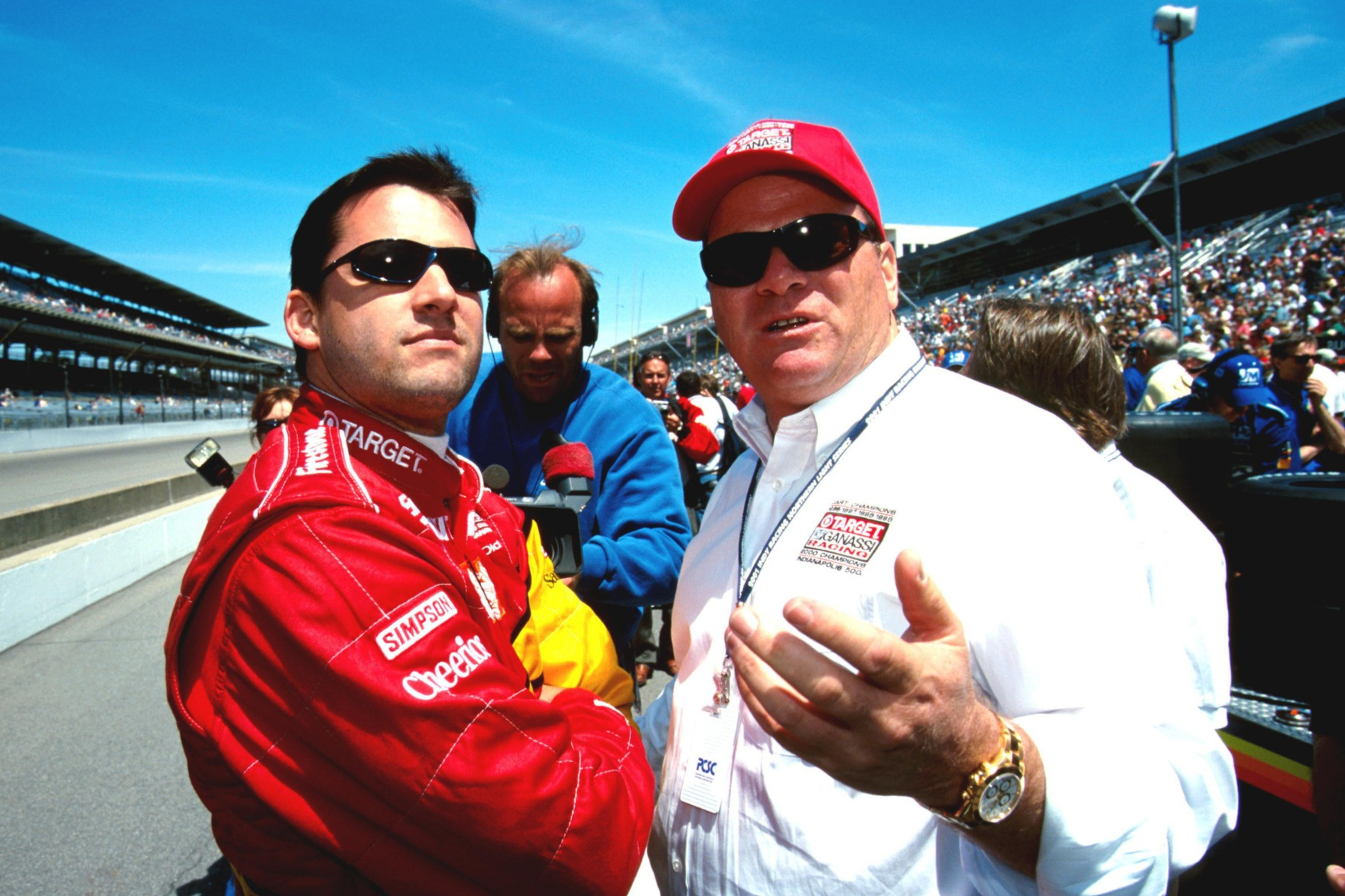 Stewart certainly couldn't be faulted for his effort on raceday as he finished all 600 laps across the Indy 500 and Coca-Cola 600 NASCAR race, but sixth and third places were not the dream results he longed for.

His case was helped when Indy 500 poleman Scott Sharp memorably crashed at the race's first corner, and he hit the front for the first time on lap 46 during the pitstop cycle.

He again led the field from laps 137 to 148, as Team Penske drivers Helio Castroneves and Gil de Ferran were penalised for their drag race out of the pits - which caused Michael Andretti to damage his front wing against Stewart's car as the drivers jostled for position on pit exit - and ordered to fall in behind.

Stewart would never attempt 'double duty' again and focused on his NASCAR career thereafter, winning Cup series titles in 2002, 2005 and 2011 - the latter as an owner-driver

Stewart pitted when the next caution period fell, amid light rain that would force a red flag soon after. "This lasted 17 minutes," noted Autosport's Gordon Kirby, "during which Stewart jumped out of his car and jogged to the medical centre for some massaging of a severe leg cramp".

He ran fifth until Robbie Buhl crashed out of second, but slipped behind the recovering Andretti in the pits under the resulting caution and fell to sixth at the finish as rookie Castroneves scored his first of three Indy wins for Penske - in the team's first start since 1994, having failed to qualify in 1995 and been absent following the damaging split between CART and the IRL.

Stewart would never attempt 'double duty' again and focused on his NASCAR career thereafter, winning Cup series titles in 2002, 2005 and 2011 - the latter as an owner-driver in a memorable final race showdown against Carl Edwards decided on countback of wins.

However, Stewart's result remains the best achieved across both races by a driver attempting 'double duty'. Robby Gordon in 2000 and Kurt Busch - the most recent driver to attempt the feat in 2014 - both finished sixth in the Indy 500, but neither could emulate Stewart's third place at Charlotte. A rain delay required PJ Jones to start Gordon's car in 2000 - he took over during a rain delay, finishing 35th - while Busch blew an engine after 271 laps and finished 40th. 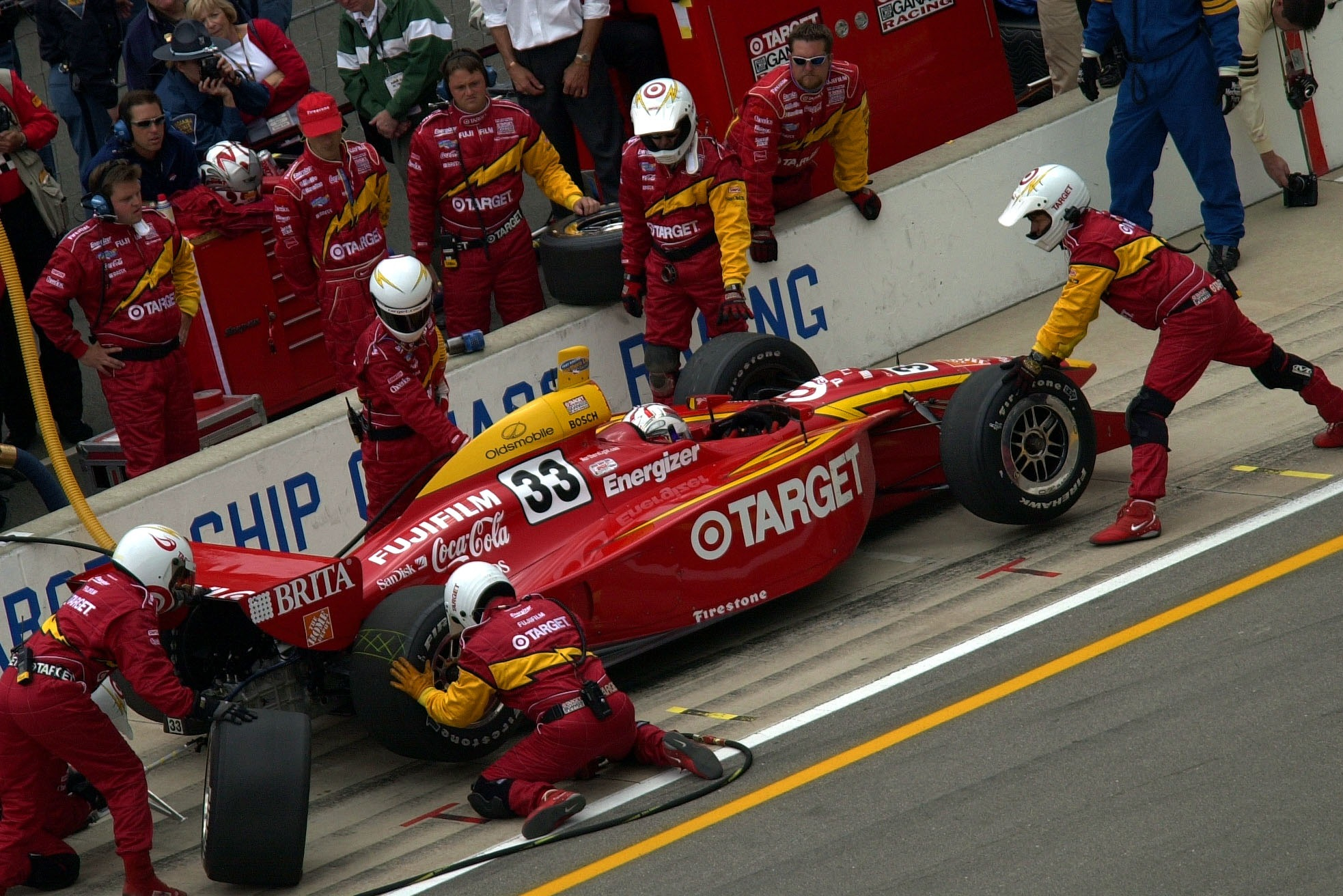