Rain had been expected throughout the afternoon, with variable levels of drizzle making the track unpredictable all race.

Eventual lead combatants Dixon and Pagenaud ran only third and eighth early on, with Dixon having lost out to fast starter Jack Harvey at the green flag as his polesitting Ganassi team-mate Felix Rosenqvist held the lead.

Rosenqvist briefly escaped while Dixon pressured Harvey, before an early yellow for a spin at the final corner for Marcus Ericsson that took the Formula 1 convert all the way into the oval layout's wall.

At the restart Dixon immediately surged past Harvey then attacked Rosenqvist, who locked up and ran slightly wide into the first corner and let his team-mate through.

But another yellow followed straight away as a brush of wheels between Harvey and Colton Herta in their wake spun the Austin winner's Harding-Steinbrenner Dallara-Honda.

The stranded Herta was then hit by Ryan Hunter-Reay, who was punted into a spin by James Hinchcliffe in a midfield incident.

Dixon escaped at the next restart, while Rosenqvist was attacked on either side by Harvey and Ed Jones and fell from second to fourth as Jones did the opposite.

Once the rest of that group had pitted for the second time, Harvey and Pagenaud rapidly caught Dixon - all three running longer then pitting as one, with Pagenaud jumping Harvey.

Then the rain arrived in earnest for the final third of the race. Series returnee Helio Castroneves was among the first to take rain tyres, but he spun at the pit exit and became stuck on the grass - prompting a third caution.

Strategies initially scattered under the yellow, with some staying out on slicks, others making what they hoped would be final stops but keeping slicks, and a minority pitting for wets.

But it was the wet tyre group that had guessed right, as the rain increased in the following minutes and everyone else had to pit and join them on rain tyres. 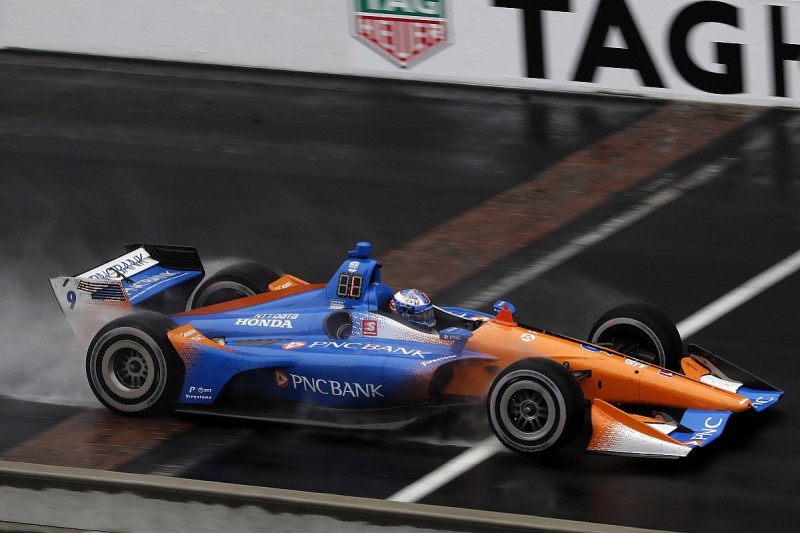 Dixon, Harvey, Pigot, Matheus Leist and Jones benefited from going straight to wets and headed the field at the restart, with Pagenaud back to sixth having at first stayed out then belatedly come in for wets.

The Penske driver quickly surged forward when the racing resumed with 17 laps left, and within six laps he was going around the outside of Leist at Turn 1 to move into third.

Harvey proved tougher to shift - a five lap dice ensuing before Pagenaud took second with a dive down the inside at the first corner.

He then caught Dixon at an astonishing rate of up to two seconds per lap, before pouncing when the reigning champion ran slightly wide in the infield on the penultimate lap and taking the lead in a move that involved a brush of wheels.

Pagenaud raced clear to win by 2.1s over Dixon, with Harvey giving the Meyer Shank/Schmidt Peterson partnership a first podium in third ahead of Leist, Pigot and Jones.

Fires at his second and third pitstops contributed to Rosenqvist falling back into the midfield before he recovered to eighth behind Will Power. Graham Rahal and Santino Ferrucci completed the top 10.

Going off-sequence on pitstops early on put Pagenaud's other team-mate Josef Newgarden in a position that might have paid off with victory before the rain shook up everyone's strategies.

A penalty for his crew allowing a wheel to roll away during his final pitstop then dropped Newgarden to the back. He recovered to 15th.

In his first race since being added to the Red Bull junior scheme amid talk of a future F1 move, Indy Lights champion Patricio O'Ward gained an immediate penalty for hitting Alexander Rossi as the field formed up for the start.

Topping up fuel under both the early yellows got O'Ward onto the same strategy as Newgarden and he had a spell in second but ended up 19th amid the rain and a late additional stop.