After the collapse of the HRT F1 team last December, Karthikeyan has kept his hand in by racing successfully for David Sears' Super Nova squad in Auto GP.

But prior to settling on Auto GP, the Indian had made efforts to get an IndyCar seat for 2013, as AUTOSPORT revealed earlier this year.

He is now making another attempt to fulfil his ambition of returning to North America, where he competed in the NASCAR Truck Series in 2010.

"It's looking like I could test an IndyCar before the end of the year," said Karthikeyan. "David Sears also has some good contacts in America, so perhaps that could help."

Sears believes Karthikeyan was never able to show his potential in F1 and deserves a chance to do so in IndyCar.

"My sentiment is, if Narain had had a chance in a decent Formula 1 car, like a Force India, things would have worked out different there as well. 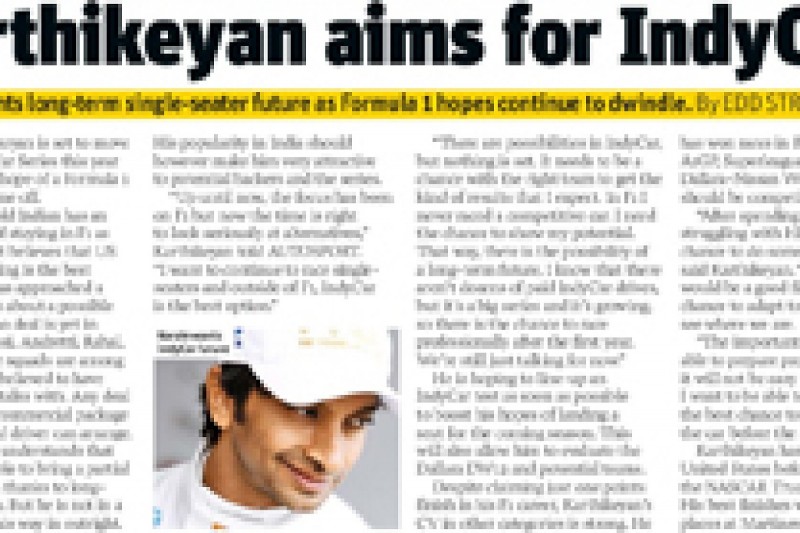 "Hopefully he can find that in IndyCar."

Karthikeyan was the pacesetting driver in the second half of the Auto GP season after switching to Super Nova for round four of the championship at Silverstone.

"I got the most poles this year, so I feel happy that I am driving well. All I needed was a good car," said Karthikeyan.

"If I had come to Super Nova one round earlier, at the Hungaroring, it would have been closer. I would have had a genuine shot."