Juan Pablo Montoya was on the pace as he returned to an IndyCar cockpit in testing at Barber on Tuesday, getting within a tenth of a second of the fastest time

The ex-Formula 1 driver lost his full-time drive with Penske for this year, initially signing a one-race deal with the team for the Indianapolis 500.

That arrangement was subsequently extended to include the Indianapolis road course race before the 500, so Montoya joined 21 other drivers in action yesterday.

He finished the day with the fourth-fastest time, just 0.0888s slower than team-mate Will Power at the top of the order.

"I feel like I [last] drove the car yesterday," Montoya said at the end of the test, after six months out of action since the 2016 finale.

"It's kind of fun. I've been out of the car since September, but I feel fine.

"I have a new crew, new guys, new engineer. It's working really well.

"There's a lot of focus on the Indy 500 and that's understandable, but the [road course] grand prix has come a long way in a short time.

"More people need to discover it because all of the races have been very competitive with passing and lead changes.

"It's always great to race at Indy, and I'll be excited to get in the car again for the Month of May." 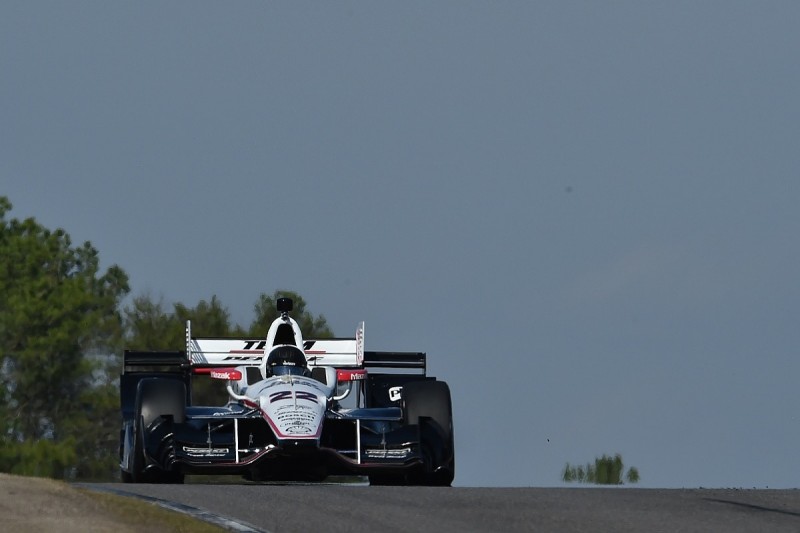 Power led the way with a 1m07.7518s, set in the closing moments of the day during a final hour that became action packed due to the use of push-to-pass being permitted.

Ganassi's Max Chilton was 0.0073s back in second place, breaking up what would otherwise have been a Penske-Chevrolet top three lockout.

"It just shows how tight it is between Honda and Chevy now," said Power in reference to Chilton's Honda-powered effort.

"We went through a bunch of stuff [during the test] and we got some good answers here."

Chilton joked that Power had "spoiled the fun" with his last-gasp lap, adding that Ganassi had turned things around after a difficult start to the day.

"We actually were struggling a lot with the car all day, that's why we took a long, long lunch break to sort of change the car," he added.

"Then we definitely made steps forward, did a few fine-tunes.

"It's amazing, you make a few changes and you jump yourself up the board."

Chilton's Ganassi team-mate Scott Dixon was among those cars in seventh, with Graham Rahal and reigning champion Simon Pagenaud completing the top 10.