Jimmie Johnson wants to stay in IndyCar for "as many years that Chip [Ganassi] will have me" following his first oval test for the team at Texas.

The seven-time NASCAR Cup champion tested at Texas Motor Speedway on Monday, turning a best lap that would have put him fourth on the grid for this year’s double-header there.

Johnson has raced the #48 Ganassi entry on all the road and street courses this year but handed off to Tony Kanaan for the four oval races.

Amid mounting speculation, and his own blooming enthusiasm for U.S. open-wheel, Johnson described himself as “definitely a step closer” to thinking in terms of making his oval IndyCar debut in 2022.

“There are more conversations to be had with family, team and sponsors and at least another test session ahead of me before I can really make a decision,” he said today. “But driving the car [on Monday] only piqued my interest more.”

“I'm happy to go on the record and say I'll run as many years in IndyCar that Chip will have me and I can find sponsorship. I am having such a good time, and every lap I get in the car, I'm only going to be better.

“If I were to come back in '23, I think those expectations would rise up again, and my performance would be better yet. My intent is to stick around as long as I possibly can."

Johnson explained the differences between IndyCar and NASCAR running on ovals, explaining that the IndyCar remained "planted" through the corners at high speed.

He also explained that getting used to the gearing was a new experience, explaining that he wouldn't normally shift down mid-corner behind the wheel of a Cup car.

"The faster you go, it's almost the more stuck the cars are due to the downforce," Johnson said. 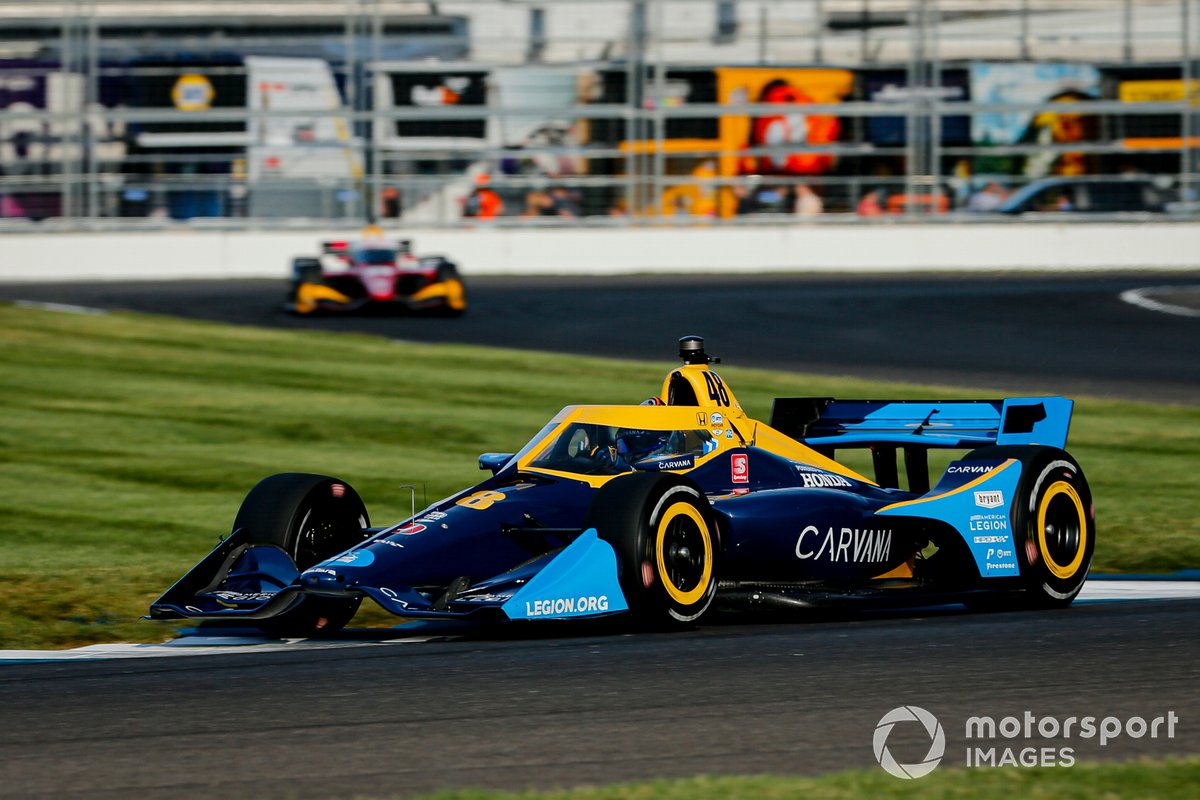 Johnson was very encouraged by his pace on the IMS road course this month - and his significant gains since the May race on that track.

"That's something that I really didn't anticipate and felt the car would be maybe a little lighter at the end of the straightaways and entering the corners and a little more uncomfortable.

“Something else that was a little different was shifting [gears] mid-corner. So Turns 1 and 2 you go down a gear and then up a gear and kind of make your laps that way, and that was something new and different for me to get used to on an oval.

"In an IndyCar with a six-speed gearbox and the fact that you don't lose any time with gear shifts, the gearing is much different, and those top three or four gears are very close together to help you with either a tow or wind direction."

In addition, Johnson expects to take part in the Indianapolis 500 rookie orientation programme at the Indianapolis Motor Speedway in October, as he considers a potential 500 debut next year.

“I feel like that orientation would be the next logical step on track,” he said, “and then following that would be more team and sponsor-related conversations: are we able to do it? How would we do it? What would that look like?

"[We would] kind of use that second test as a real moment to send me on my path towards potentially running the 500."

“We don't want to get too far ahead of ourselves. I first need to say, ‘Yeah, I'm in,” before we really get into the granular details to sort it out.

"I think another go in the car, especially on the track that would be the focal point, will really give me my decision and if it's time to pursue all that.”