Josef Newgarden headed a Penske 1-2-3 in the IndyCar practice session at Iowa, beating Will Power and Simon Pagenaud to the fastest time

Newgarden clocked in a 17.3397s lap (185.609mph) with seven minutes of the session to go, as the field started to run in qualifying trim in the latter stages.

Power wound up just 0.0326 seconds down on Newgarden, as Pagenaud joined his Penske team-mates in the top three - with just two minutes of the session to go - with a 17.4533s lap.

The top four was occupied exclusively by Chevrolet-powered cars, as Ed Carpenter's 17.4783s lap from early on in the session held strong among the qualifying runs. 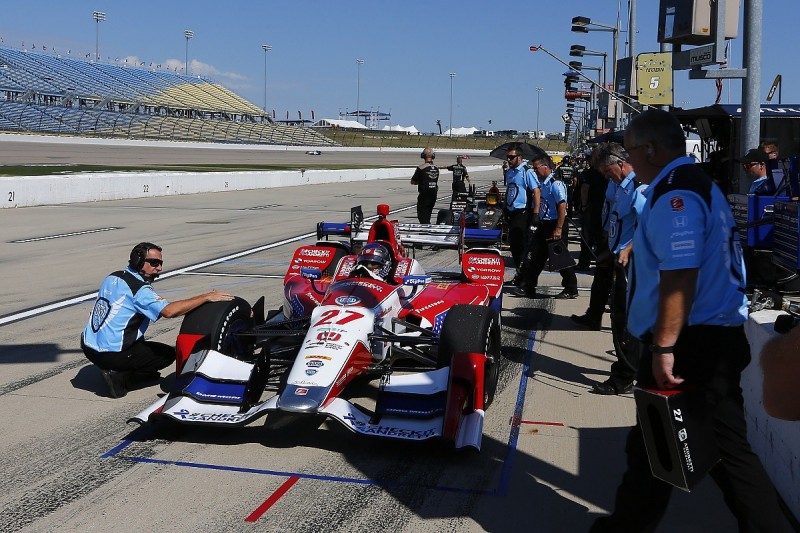 Marco Andretti was the fastest of the Honda runners in fifth, ahead of Tony Kanaan and Mikhail Aleshin, the latter of whom had been within the top three for the first hour.

Alexander Rossi was eighth fastest, beating fellow Honda runners James Hinchcliffe and Graham Rahal, who ensured that the top 10 was covered by less than 0.2s.

Championship leader Scott Dixon was only 16th fastest, having been forced to miss the final 20 minutes of the session as a penalty for a pit-lane transgressions at Road America.

Practice was extended by five minutes after JR Hildebrand lost control of his Dallara-Chevrolet towards the end of the session, hitting the wall at Turn 2 and narrowly avoiding team-mate Carpenter.

Esteban Gutierrez was 19th in his first full oval-track session during a race weekend, just under 0.4s down on Newgarden's fastest time around the 0.875-mile track.