Polesitter Colton Herta comfortably headed the chasing pack, with Chip Ganassi Racing's Scott Dixon and Power in close contention in what became a two-stop race for the majority.

But at one-third distance, Herta was overtaken by Dixon, whose superior traction onto the back-straight allowed the five-time champion to complete the move.

Power, Felix Rosenqvist and Rossi all passing the struggling rookie driver as he battled tyre wear.

With the leaders completing their first pitstops shortly after, Dixon retained the lead ahead of Power once things had shaken out, although Rosenqvist's Chip Ganassi team 'overcut' Rossi to move into third place.

Dixon then began to build his lead in the second stint, enjoying a three-second lead to Power, when his Honda-powered machine suffered from a suspected battery failure at half-distance, forcing him to crawl back to the pits.

But while the team replaced the part, Dixon rejoined down in 16th and three laps down and all but ruling him out of defending his title for a sixth championship.

That meant Power inherited a lead he would never lose, even after a late caution period when Santino Ferucci stopped on the pit straight.

Power crossed the line 2.7s ahead of Rosenqvist, the lead Honda finisher, as Rossi completed the podium.

Herta, who had dropped to 14th after his struggles at the end of the first stint, recovered to take his best result since his maiden victory at Austin in April with fourth.

After only qualifying in 13th place, Newgarden was caught up in a Turn 1 melee after Graham Rahal misjudged his braking, collecting Zach Veach and both James Hinchcliffe and Conor Daly in the Schmidt Peterson Motorsports-run cars.

Newgarden was forced to take to the escape road and dropped to the rear of the field, where he was accompanied by fellow title hopeful and team-mate Pagenaud, who was tapped into a spin by Max Chilton. 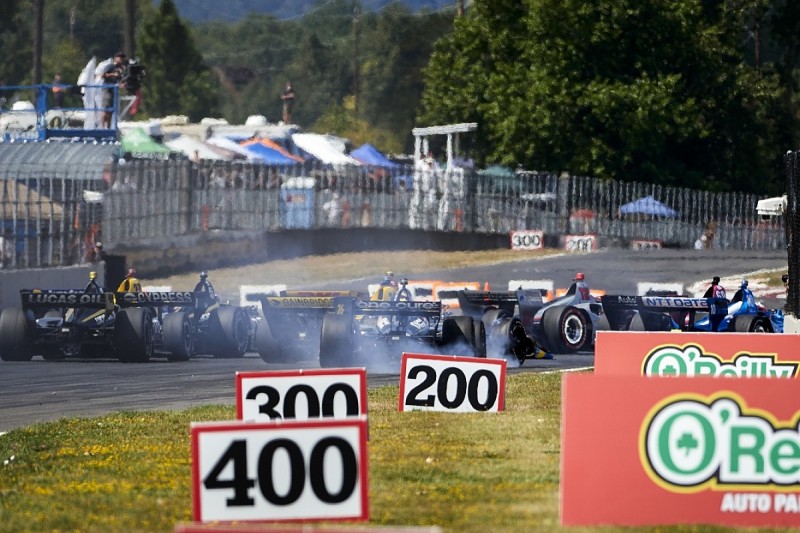 The Penske pair were handed a reprieve when IndyCar officials reset the race order under the lengthy safety car period, due to a swathe of drivers cutting the chicane at Turn 1, allowing Newgarden and Pagenaud moving up to 11th and 12th respectively.

While Newgarden made progress, Pagenaud became mired in the midfield.

The 2019 Indianapolis 500 winner could only manage seventh, leaving Pagenaud 42 points behind Newgarden with the double-points finale at Laguna Seca to come.

Spencer Pigot impressed once again as he scooped sixth place, his second-best result of the campaign for Ed Carpenter Racing.

Matheus Leist, Bourdais and Charlie Kimball rounded out the top 10, with Marco Andretti's late gamble on pitting under the Ferucci caution backfiring and leaving the #98 Andretti Autosport-run car in 13th.