Honda and Chevrolet have begun their manufacturer testing of the new 2018 IndyCar aerokit, with the engine builders conducting running at Mid-Ohio and Road America respectively

Chevrolet ran Penske driver and 2016 IndyCar champion Simon Pagenaud alongside Ed Carpenter Racing's Spencer Pigot at Road America yesterday, in the first of five days allocated to the manufacturers by IndyCar before the end of the year.

It is understood that Pagenaud conducted "around 80 laps" of testing, with Pigot's total unclear.

Pagenaud's first experience of the 2018 aerokit was positive but noted in key areas it is still similar to its predecessor.

"There's definitely less grip, which is very good," he said. "It's just a different challenge and I enjoyed it.

"The acceleration is pretty strong, but I think the drag was similar to what we've had so the straightaway speed was similar in that configuration.

"There's less downforce, but the braking zone hasn't changed that much.

"But overall, we're still in the same era of car, same [Firestone] tyres as well."

Pagenaud said he was not reading too much into his lap times.

"It was a cold day on the track and with only two cars going around, there wasn't much rubber going down," he added.

"But I felt the lap times were quite decent, a couple of seconds slower compared with qualifying on reds [option tyres], but that's normal because we had less downforce.

"It feels like the acceleration is strong coming out of the corner, so I feel IndyCar really got the 2018 car right with this package." 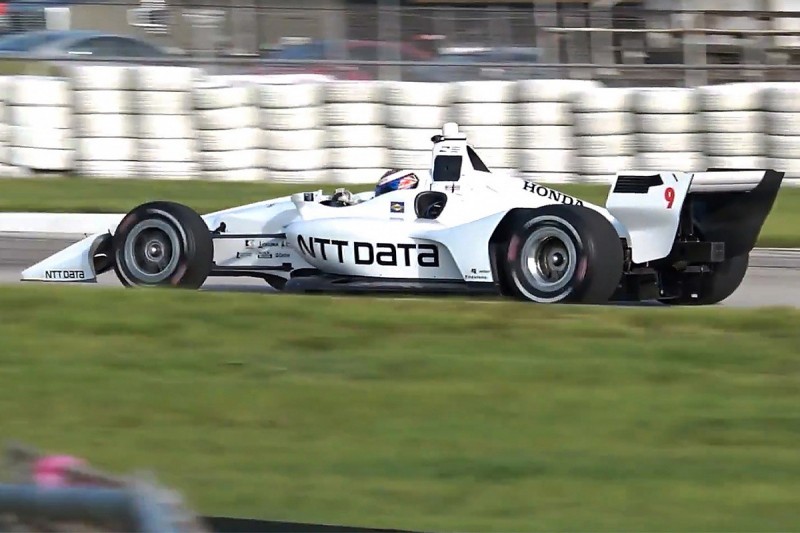 The manufacturer did not make clear who conducted its running, although Scott Dixon is understood to have driven the Ganassi car (pictured above).

Dixon is currently Ganassi's only confirmed driver for 2017 and James Hinchcliffe was SPM's only full-season entry last year after Mikhail Aleshin left mid-year.

Private team testing will not begin until January, while the manufacturers now have four full days of testing left before 2018.