Will Power, Colton Herta, Pato O’Ward and Alex Palou have all praised the new 2.17-mile street course in Nashville, despite bumps, and in O’Ward’s case suffering an early shunt.

O’Ward clipped the inside wall at Turn 3 on his eighth lap of the opening session, bouncing him into the outside wall, thereby breaking the front suspension on both sides of his car. Despite this, the Mexican 21-year-old who sits second in the championship was enthusiastic about the course that Tony Cotman’s NZR Consulting firm has devised.

"I love this place, what a cool track," he told NBC’s Peacock service. "I got caught out by that inside wall and it sent me off there. The damage doesn't seem to be too bad. We'll be ready to go tomorrow, we'll see what we've got for qualifying."

Asked what he thought of the track, he replied: "That it's violent! Going into Turn 4 [the transition off the Korean War Veterans Memorial Bridge] the bumps are very violent. You're going through there and the wheel is, like, getting knocked out of your hands.

"It's very unique, it's unlike any other place that we go to for sure."

Team Penske’s Will Power, who finished the day eighth fastest, agreed that particular bump was the “worst”, adding, "If they could grind that down a little bit, it would be really nice.”

"But the track is cool, man. I really enjoyed it," Power added. "Really typical street course – the bumps and cambers of the road you’ve got to deal with. It was fun apart from the coming off the bridge heading into the city. That's a bit sketchy with the bumps. That one big bump. That's it: the rest are pretty good. [The Turn 4 bump] does upset the car. I almost lost it there following someone. But we came in, we raised the ride height, and it got better for us." 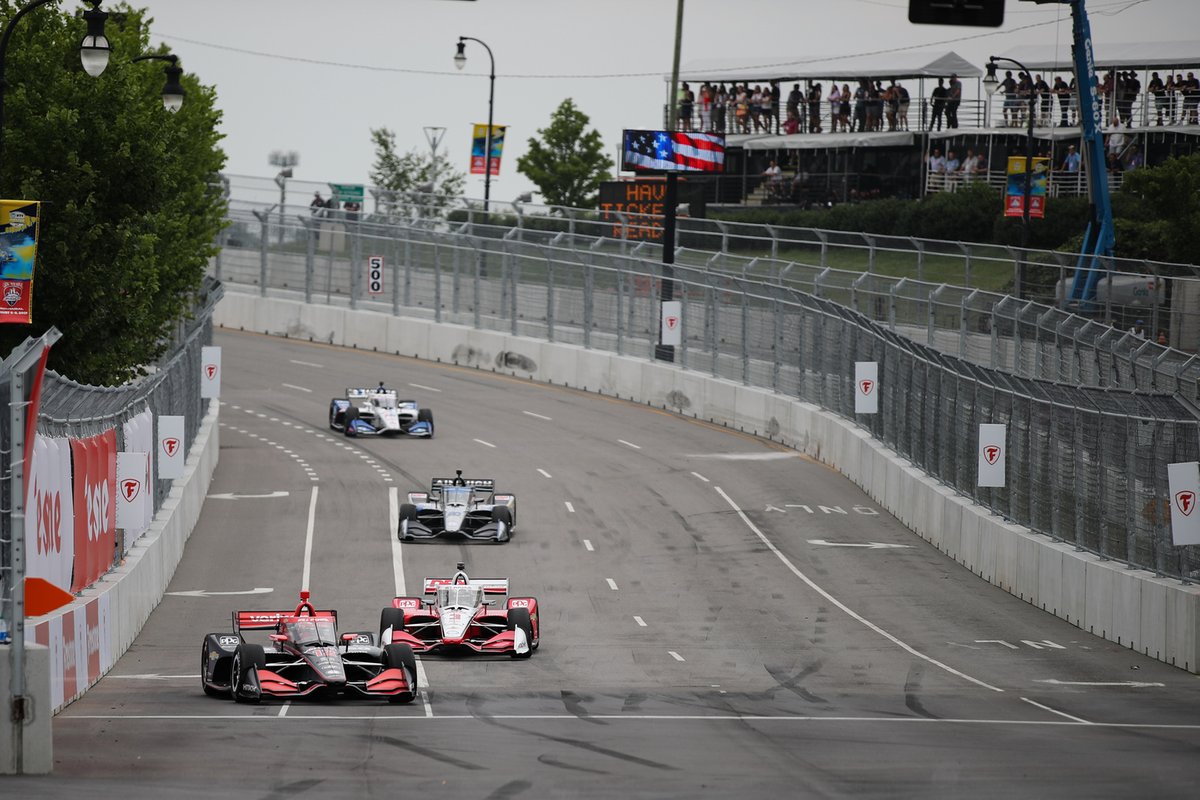 After a tight barely two-car-wide sinewy section, the cars return over the bridge at around 180mph before braking for Turn 9. Asked if that was a potential passing zone, given that the course is seven-cars wide at that point – which will serve as Turn 1 for the opening lap in Sunday’s race – Power replied: “It's a fast corner. You actually flow a lot of speed through that corner. Like you don't brake as long and as hard as you would like if you wanted to pass someone.

“Yeah, I think it will be a passing zone, but it's faster than typical street course corner.”

Andretti Autosport’s Colton Herta, who topped opening practice, also said he enjoyed the challenge of the track, observing: “I feel like when you go to these street circuits that are bumpy and technical like this one is, it's about having the least worst car, if that makes sense. It's never going to handle nice, so you try to get it into an operating window where it's better than everybody else's.

“But it's not a negative thing. I think it adds character to the track. It's actually pretty interesting to follow people through there and see if people are staying out wide or cutting in, trying to avoid the bumps, just finding different lines.”

Points leader Alex Palou, sixth fastest in first practice, remarked: “It was more fun than I thought to drive it. Like when I saw the track map, I thought it was going to be a bit boring to drive it with the slow speed stuff, just straights and 90-degrees corners. But they are all different.

“I think it's quite fun. Very bumpy, but also challenging. Yeah, it was fun.” 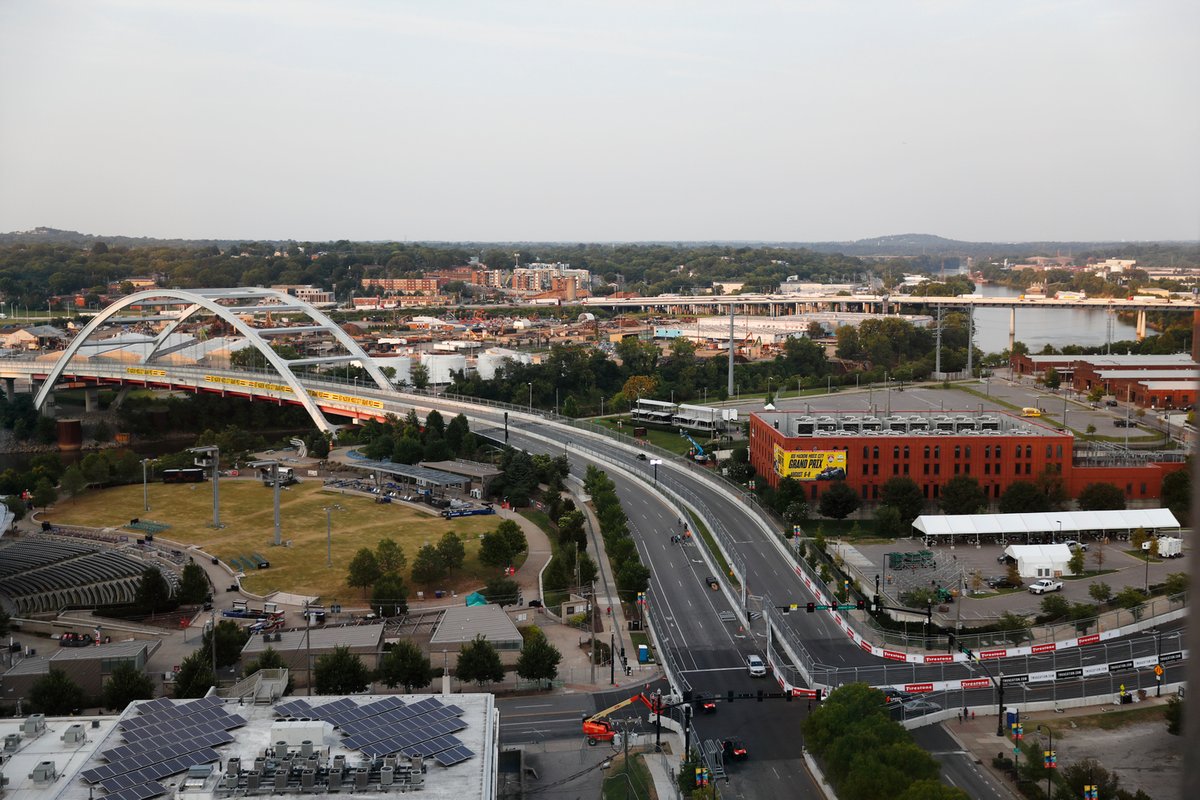 Aerial view of the street circuit

Both Herta and Power said they had problems getting the brake balance right, finding they were locking up front tyres under braking while tyre/brake temperature was low on out-laps, and then locking rears under hard braking as their cars came up to temperature. But tyre degradation-wise, the drivers didn’t feel they yet had an accurate read.

“I didn't even get a good feel of what tyre deg is going to be like because of how [fast] the track evolution was,” said Herta, who dominated this year’s race at the street/airport St. Petersburg course. “I took my tyres out a stint and they were hanging in there. But heat will kind of amplify all those problems we have with tyre temp.

“That will probably be the biggest thing if we do struggle for tyre deg[radation] – holding onto tyres. That's going to be one thing that the heat is not going to help.”

“We don't know,” concurred Palou. “I think we kept the same time even with really bad tyres because the track was getting better and we got more confidence. Yeah, we'll see how the tyre deg is.

“I think we're going to have a good race. I think the tyre deg is going to be good enough so we have different strategies going on. I think we’ve had some weekends where tyre deg was quite high and that helps racing for us. We can undercut and overcut [on pit strategy]. 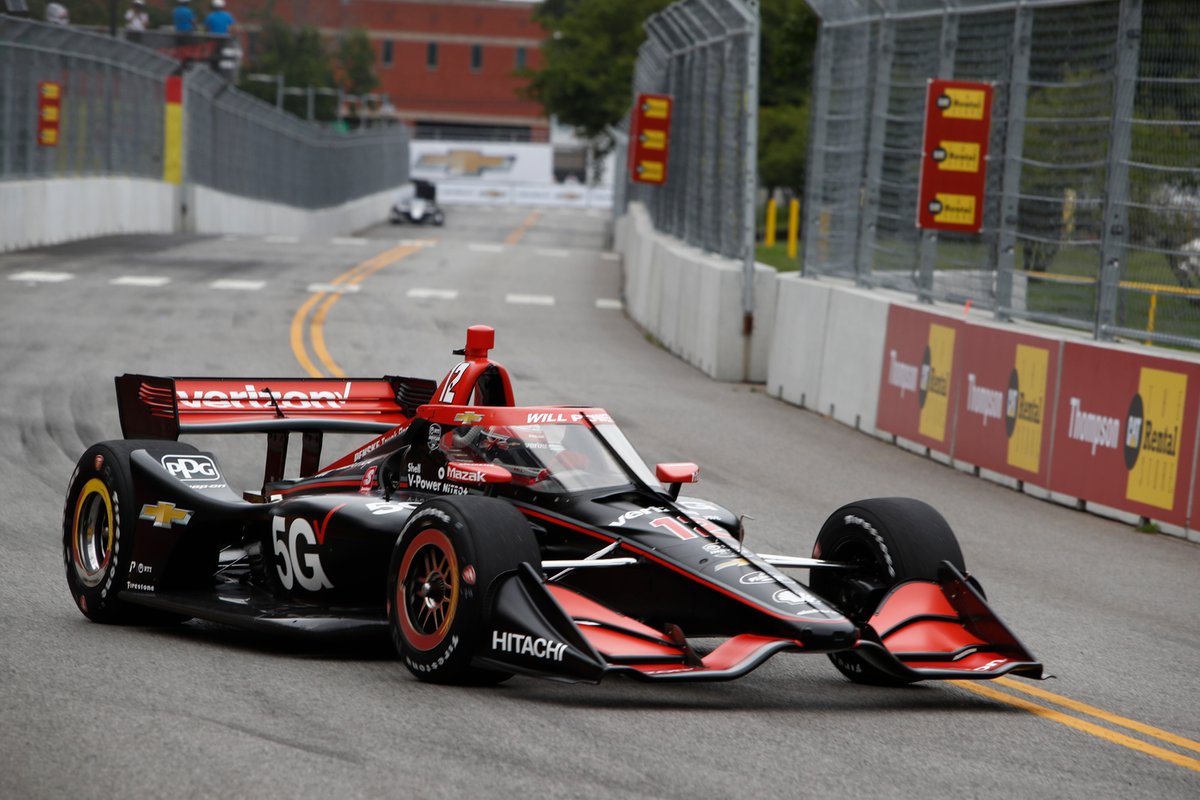 Notable at the end of the first practice session was that the top six cars were Honda-powered. Over the past 10 years of IndyCar’s current 2.2-liter turbo engine formula, the HPD-produced units have been renowned for their low-rpm torque, and the prevalence of first/second-gear corners in Nashville appears to have amplified their strength.

“I reckon the Honda is going to be very good in that really tight section,” said Power. “Yeah, a lot of first-gear pulls – obviously where Honda has been strong. Chevy is good on the top-endy stuff. It appears that way, yeah.”

Herta added: “There’s not a lot more speed to find out of these engines even though they do every year. It seems to be the same trend every year – it’s the lower end that Honda is good, in road course trim at least. Yeah, lower end Honda is better, the higher end the Chevy has a little bit more speed.”