The previous IndyCar round at Portland was won from 20th on the grid by Takuma Sato, thanks to the way strategies unfolded around the race's full-course yellows.

Rossi ended up at the back at Sonoma after clipping Andretti Autosport team-mate Marco Andretti at the first corner and sustaining damage that forced an immediate pitstop.

Dixon, who finished the race second to Rossi's team-mate Ryan Hunter-Reay, said he was wary that Rossi might be able to turn his first-lap delay into a similar strategy turnaround to Sato's.

"With IndyCar racing, you think that somebody that has a problem in the first corner, they tend to go on and win the race," said Dixon.

"The team came on [the radio] as I exited the Carousel in Turn 6 and said 'There's going to be some cars coming back in [Turn] 7 that have taken a shortcut, a damaged car.

"I could see it was Rossi. That was the first thing that clicked in: 'Man, he's going to have a good day, return, fix the car, have a strong strategy and come through'.

"I followed it on the [scoring] pylon. I could see how he was moving up. He's a fierce competitor.

"We saw that those cars had tremendous speed from Hunter-Reay controlling the pace.

"There was no point that I wasn't worried about that situation."

Rossi managed to unlap himself shortly before half-distance, then benefited from a yellow for Graham Rahal's retirement to catch the pack.

A series of passes brought him into the top 10, and a gamble on an early final pitstop then vaulted him to fifth.

But he had to nurse his fuel mileage in the closing laps and fell back to seventh. 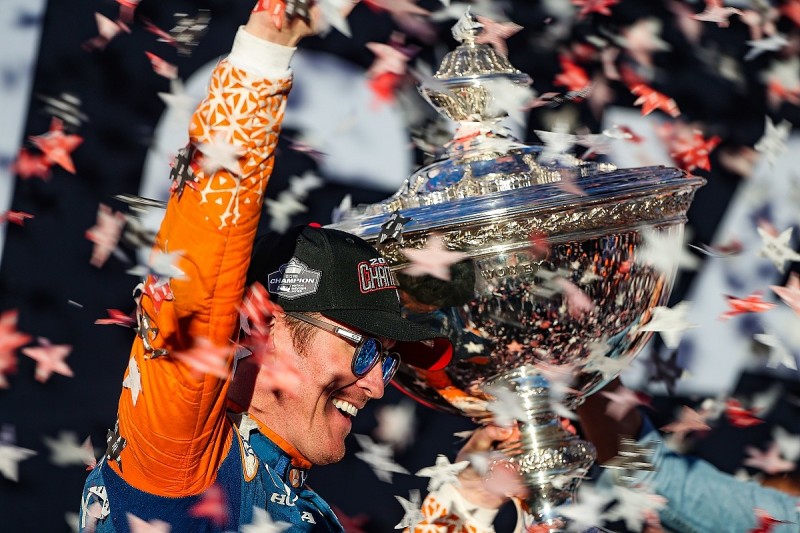 That allowed Dixon to clinch his fifth IndyCar championship with second place.

"It's so weird. You kind of always doubt the situation that you're in - at least I have, maybe from the past years where we've lost championships over sometimes silly things, or sometimes where we just haven't executed well," he added.

"The whole race I was thinking about things that were out of our control, cautions that were going to flip the field.

"None of that happened. It was a very smooth race, but mentally it was tough and draining."