Multiple IndyCar champion Scott Dixon says repairing his arm could be an "off-season project", as the Kiwi is suffering with tennis elbow

Chip Ganassi Honda driver Dixon emerged as the closest challenger to eventual winner Simon Pagenaud - who won this year's Indianapolis 500 - in last weekend's IndyCar race at Toronto, despite suffering with his arm. 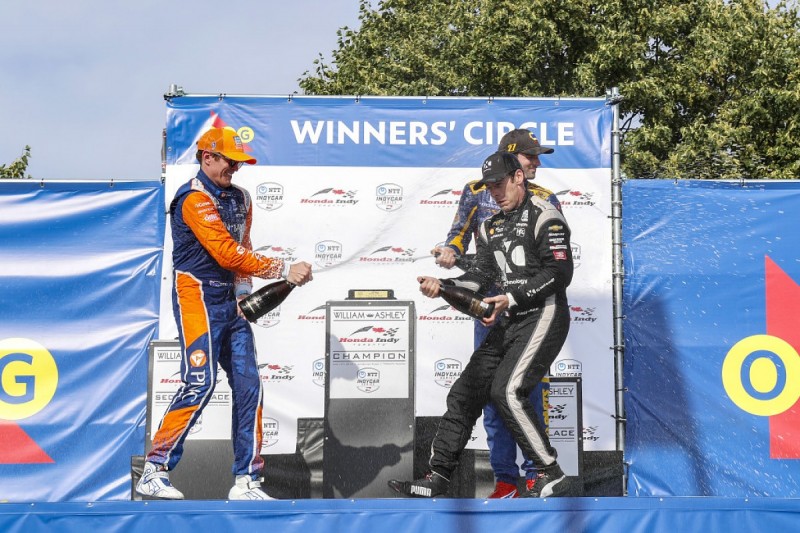 The tight and twisty street track of Toronto made the condition especially painful for the five-time series champion.

"It's not getting any better, I think it's going to be an off-season project," Dixon told NBC after the race.

"We're doing all we can to contain it but races like today, and Road America actually was really tough, so maybe it's getting a little bit better in this period but definitely my left-arm is really weak at the minute."

Dixon's race was also affected by hitting the wall in the early stages, which knocked his steering out to the left for over 70 laps.

"I made a mistake, pretty big mistake, probably around Lap 12 or 15 where I hit the inside wall on (Turn) 9, bent the suspension pretty bad," he added.

"Actually thought I had a puncture.

"Luckily it wasn't too bad. It was enough to get to the end, but not ideal.

"I think it was just really hard to get close to cars today.

"You could kind of get to them, but even the pace I thought on our last set of blacks [tyres], we caught an eight-second gap in literally five or six laps. The pace was really good.

"Then once we just got to Simon, we couldn't do anything.

"Straight line speed was ridiculous today, to be honest.

"I don't know if they were trim.

"Honestly, I was barely closing on them. [It's] something we definitely need to work on for the latter part of the season."

Pagenaud was dominant in his Honda-powered, Penske-run car, having taken pole position for the race as well.

He said "don't count me out" when asked about whether he can join the title battle, which has been focused on Josef Newgarden and Alexander Rossi in recent weeks but Pagenaud is now third and 39 points off the lead with six races of 17 remaining.

"I think if you look at my IndyCar career, I've been fighting for championships almost every year. Never count me out. That's all I can say," said the French driver, who won the Toronto race on Bastille Day.

"We've got all the equipment, all the tools to do so well.

"Now it's just a matter of knowing when to push it. It's a long championship. You've got to build it.

"I'm here and I think Newgarden, Rossi and Dixon know it, like I know they're here, too. It's going to be a great fight in the end."

Pagenaud resists Dixon for third IndyCar win of 2019 in Toronto