Just five days after a dramatic six-hour enduro, the character of this race was entirely different, especially given a lengthy stoppage before the half-distance mark due to lightning in the area.

But once again there was a mighty fight to the finish with around 36 minutes remaining after the race was restarted. That length was right on the fuel limit range for the DPi prototypes, although another brief caution moments later after some debris was deposited on the track at the restart allowed a little more leeway for the fuel number-crunching engineers.

And whereas last weekend the timing of the final restart proved frustrating for the Cadillac teams, this time it worked out to perfection.

The #31 Cadillac of Derani and Nasr had stopped for fuel immediately prior to the red-flag interruption, and even though everyone ducked onto the pitlane again prior to the restart, Nasr required merely a splash and was able to take the restart in the lead.

Dutchman Renger van der Zande, who had taken over from Kevin Magnussen in the #01 Chip Ganassi Racing Cadillac, managed to vault from fifth to second within a couple of laps of the resumption, and was able to maintain that position to the finish, just over 1.4 seconds behind the winning Cadillac.

After once again starting on pole position, the championship leading #10 Wayne Taylor Racing Cadillac of Ricky Taylor and Filipe Albuquerque led the early stages before slipping to third after the first round of pitstops.

Albuquerque then found himself in fourth after the final restart before squeaking past the Cadillac of Loic Duval and Tristan Vautier with a just a half-dozen laps remaining.

After victory in last weekend’s six-hour race, Mazda were unfortunate at the restart and ended up in fifth place. 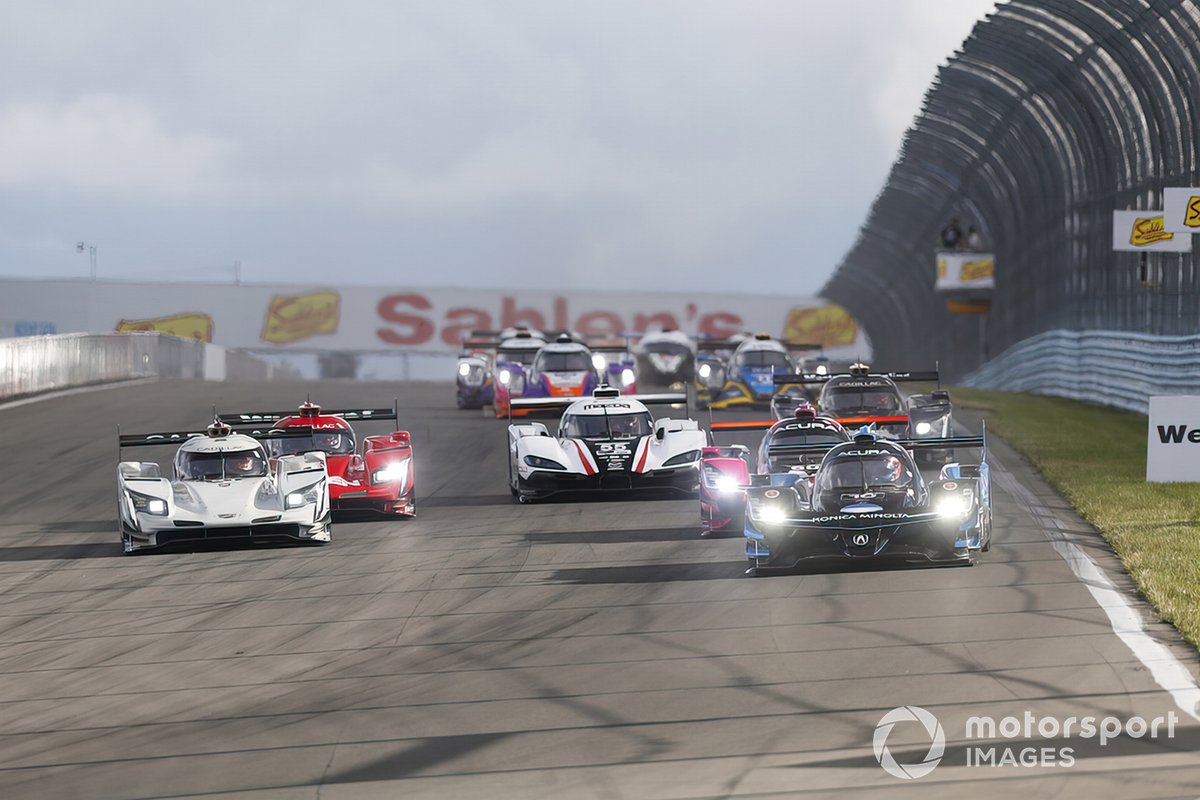 After starting fifth, Harry Tincknell fought his way to second at the start and was actually leading the race when the race was halted. But with the car needing more fuel than its rivals, Oliver Jarvis was also muscled down several positions at the restart – on a damp track – and had to be content with an unrepresentative fifth.

PT1 Mathiesen Motorsports pair Ben Keating and Mikkel Jensen won LMP2 convincingly from the pole, while in LMP3, Felipe Fraga narrowly held off Riley Motorsports team-mate Dylan Murry and the Core Autosport Ligier of Colin Braun in a tremendous fight to the finish.

Corvette’s Antonio Garcia and Jordan Taylor triumphed again in GTLM, just as the pair did last weekend, with the sister Corvette of Tommy Milner and Nick Tandy their only real challenger.

GTD, though, was another frantic race, with Jack Hawksworth and Aaron Telitz finally claiming their first win of the season for the Vasser Sullivan Lexus team – chased home by team-mates Frankie Montecalvo and Zach Veach – after experiencing all manner of misfortune during the first half of the season.