The 24-year-old New Zealander was part of Porsche's scholarship programme in 2014.

He joins the factory's roster of GT drivers after two seasons racing in Porsche one-make divisions, which climaxed with victory in the Supercup driving for the the FACH Auto Tech squad.

Frank-Steffen Walliser, head of Porsche's GT motorsport division, told AUTOSPORT: "We have had a contract for a long time; we just chose to announce it today.

"Signing Earl was one of my first jobs when I took over my new role [in October] because he is a real talent."

Walliser explained that moves to sign Bamber, who received a financial contribution from Porsche for his Supercup and Porsche Carrera Cup campaigns as a result of his place on its scholarship scheme, were under way before his star performance on a one-off for the factory in the Petit Le Mans Tudor United SportsCar Championship finale at Road Atlanta in October.

"The deal was on the way, but after Petit we thought, let's hurry and sign him before someone else does," Walliser revealed.

Bamber will share one of the two CORE Autosport-run factory 911 RSRs in the USC with veteran Jorg Bergmeister, who is swapping from Porsche's World Endurance Championship GTE programme to return to America.

"It is absolutely amazing to stand here on this stage as a Porsche factory driver," said Bamber, whose single-seater career petered out in 2012 after stints in A1GP, GP2 Asia and Superleague Formula.

"When I stood here last year after winning the Porsche Carrera Cup Asia, I didn't think it would happen so quickly." 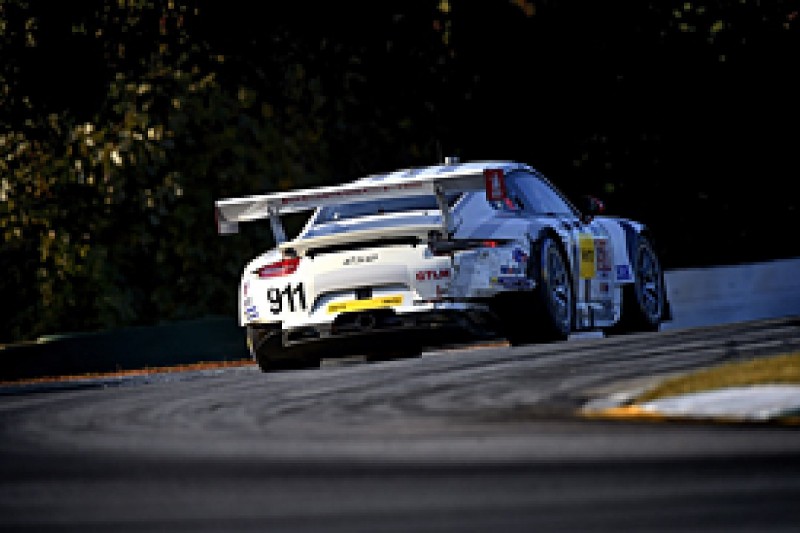 Walliser revealed that it was 38-year-old Bergmeister's preference to return to the US, where he has taken five GT2 drivers' titles in the American Le Mans Series and one overall crown in Grand-Am.

TANDY AND PILET FOR USC

Nick Tandy and Patrick Pilet, who undertook a partial season in the US in 2014, will race the other car.

Bamber and Bergmeister will be joined by Frederick Makowiecki for the USC-opening Daytona 24 Hours in January, while Porsche LMP1 driver Marc Lieb will return to the GT ranks to share with Tandy and Pilet.

Lieb's GT outing comes as a result of other members of Porsche's GT roster being busy at a joint GT and LMP1 test in Abu Dhabi in the week of the 24 Hours.

The USC line-up could be tweaked should Tandy land a drive in the the third P1 car, because the Laguna Seca USC round clashes with the Spa World Endurance Championship event that the additional Porsche will also contest.