The marque took its first win at the 6 Hours of Watkins Glen on Sunday, with Olivier Pla, Harry Tincknell and Jonathan Bomarito.

The manufacturer struggled to find success in the series with the squad that previously ran its cars, SpeedSource, but in July 2017 Le Mans winning Team Joest took over and has ran the RT24-P since.

After having two cars on the podium in Mid Ohio earlier this year, the team took its first win at Watkins Glen as part of a 1-2 finish.

"It's been an amazing journey," said Doonan.

"We've been close but we never gave up - that's the Mazda philosophy, to never stop challenging.

"This is the day we've been waiting for.

"We really felt that today could be our day, so we would focus on racing the other cars and not each other.

"But in that last half-hour, you listen to every click on the radio worried that something would come.

"To see that Soul Red Crystal Mazda RT24-P cross the finish line makes this such a special day.

"This is a group victory for the Mazda brand, and the people as well. I couldn't be happier." 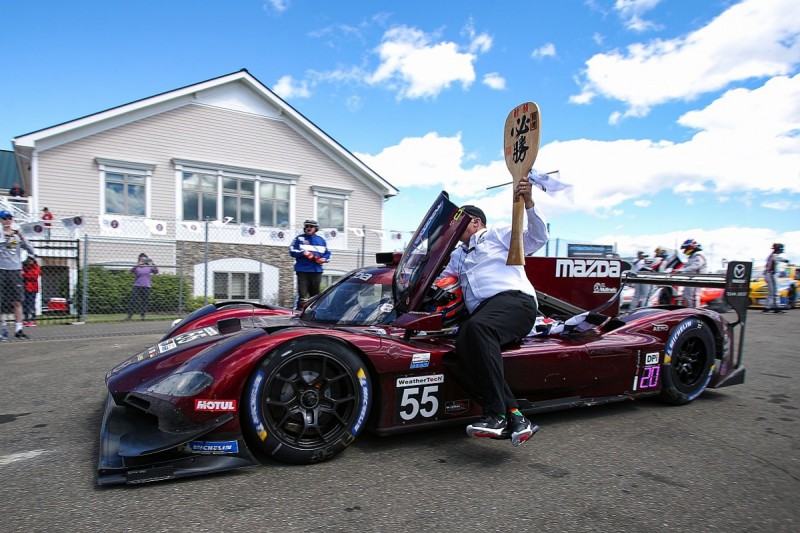 Tincknell, who was not happy to have qualified fourth, praised the efforts of Team Joest and an increased amount of teamwork between the drivers.

"It was such a team effort today to have both Mazda RT24-Ps lead the race," he said.

"The six drivers worked together so well, and we've improved so much as we push each other.

"The pit stops were perfect, and the car was perfect.

"For the Mazda Team Joest boys and girls, who have put more than two years into this, we are so grateful for their efforts and so happy to bring the car to Victory Lane."

Bomarito declared that "this is the best moment of my career", while Pla added, "I had a blast during my stint - I could push really hard and we finished the job. It was a really good day."

Due to varied driver line-ups, Bomarito is sixth in the standings now, the highest-placed Mazda driver.