Oliver Jarvis and Tristan Nunez handed Mazda its second IMSA Sportscar Championship victory in as many weeks at Mosport, after a heavy crash for Victor Franzoni prompted a late-race restart

The #77 Team Joest Mazda ran second to the sister #55 Mazda of Harry Tincknell and Jonathan Bomarito for much of the race but assumed the lead following a slow final pitstop for the latter in the last hour.

Franzoni brought out the full-course caution and then the red flags after losing control of his #50 Juncos Racing Cadillac on a bump at Clayton Corner with just under half an hour remaining, going heavily into the tyre barriers.

Franzoni escaped serious injury but was taken to the medical centre for checks.

Daytona Prototype international points leaders Dane Cameron and Juan Pablo Montoya staved off a fierce attack from the #31 Whelan Engineering Cadillac of Pipo Derani to claim the final step on the podium for Penske.

The CORE Autosport Nissan of Colin Braun took pole on Saturday, but the #54 relinquished its place at the head of the field as the team elected to change its starting driver to John Bennett.

Helio Castroneves led the early running in the #6 Penske Acura from Bomarito and Montoya.

Bomarito made a bold overtaking attempt on Castroneves at Moss Corner before going side-by-side with the Penske driver on the high-speed run down the Mario Andretti Straightaway.

Castroneves held firm and maintained the lead, but Bomarito found a way past as the Penske got held up in GT Daytona traffic on the exit of Turn 5.

Nunez forced the #77 past Montoya in a similar fashion and made significant inroads into Castroneves ahead of the first round of routine pitstops.

The two Penskes got back past the #77, now with Jarvis at the wheel, while Bomarito's 12-second lead prior to the stops was trimmed to just over three seconds.

The leading trio then pitted after the #38 ORECA of Cameron Cassels stopped on track, eventually bringing out the full-course yellow entering the final hour.

Jarvis cycled into the lead after slow pitstop work cost the #55 of Tincknell valuable seconds.

The order remained unchanged until Franzoni brought out a second full-course yellow just minutes after the restart, which eventually turned into a red flag.

Jarvis held onto the lead until the finish, with Tincknell just fending off a late attack from Cameron to take second place.

Derani claimed fourth after an epic battle with Taylor that produced side-by-side action through Turns 2 and 3, with the #31 eventually taking the place on the exit of Turn 4.

Under pressure from the recovering #50 of Braun, Derani was forced to turn defence into an attack on Taylor, who in turn got baulked by traffic and had to cede the place. 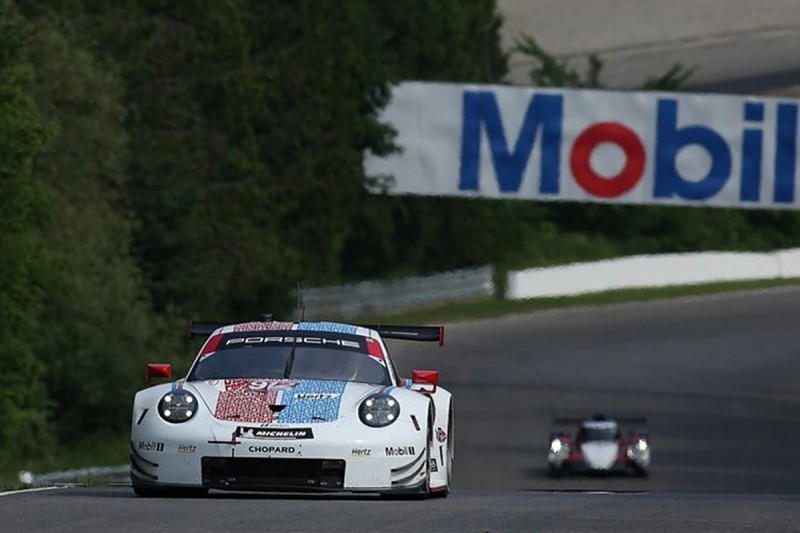 A clever strategy for the #912 Porsche of Earl Bamber and Laurens Vanthoor was key to securing the fifth consecutive victory of the season for the manufacturer.

Jesse Krohn led the initial running in the #24 BMW from the Chip Ganassi Ford GT of Ryan Briscoe, but the pair were usurped by Vanthoor after the second round of stops.

Bamber never looked under threat from then on and edged Krohn's team-mate John Edwards by 1.208 seconds at the flag.

Nick Tandy and Patrick Pilet claimed third place in the #911 Porsche, despite falling behind the #25 BMW of Tom Blomqvist and Connor de Phillippi in traffic.

Bill Auberlen made it two wins in two weekends in GT Daytona in the Turner Motorsport BMW, beating the Acura of Mario Farnbacher and Trent Hindman and the Lexus of Townsend Bell and Frank Montecalvo.