BMW has revealed how Alex Zanardi will slot into its line-up for the 2019 Daytona 24 Hours.

Autosport reported last week that Zanardi was in line for a place in BMW's factory line-up for the IMSA SportsCar Championship season opener, in which the Italian will drive a specially-adapted M8 GTE, as opposed to competing in an additional entry.

BMW has now confirmed Zanardi will drive one of its Rahal-run cars alongside IMSA regulars Jesse Krohn and John Edwards, as well as Supercars driver Chaz Mostert - who made his first GTE outing for BMW earlier this year at Road Atlanta.

Ex-Formula 1 driver and two-time CART champion Zanardi will use hand controls similar to those his DTM car was equipped with when he made his guest outing at Misano in August, which will be disconnected during his co-driver's stints. 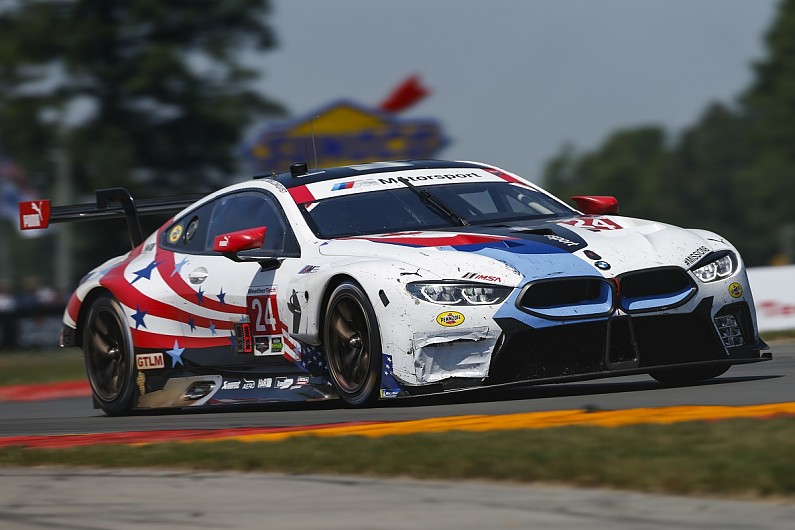 The manufacturer has also announced Tom Blomqvist will be part of its full-time IMSA line-up next season, in place of Formula E-bound Alexander Sims.

Ex-DTM racer Blomqvist will partner Connor de Phillippi in the #24 Rahal M8 GTE, while Krohn and Edwards remain in the sister #25 car.

Blomqvist made his IMSA debut earlier this year at Watkins Glen, where he acted as the third driver alongside Krohn and Edwards after being axed mid-season from the BMW-Andretti Formula E team.

He has also made three outings in BMW's World Endurance Championship squad this year at Spa, Fuji and Shanghai, replacing Augusto Farfus on each occasion.

Blomqvist and de Phillippi will be partnered at Daytona by DTM regular Phillipp Eng, who contested the race with BMW last year, and IndyCar driver Colton Herta, who will make his race debut in the M8.

BMW has also confirmed it will not change its two-driver WEC line-ups for the remaining races of the 2018/19 superseason.

Farfus, who has decided to leave the DTM to focus on GT racing and a World Touring Car Cup campaign with Hyundai, will once again be joined by Nicky Catsburg, Martin Tomczyk and Antonio Felix da Costa.

BMW is set to run a two-car line-up for the 1000-mile Sebring race, unlike rival GTE teams Ferrari, Ford and Aston Martin.

BMW has also revealed plans to mount a two-car assault on the Intercontinental GT Challenge next season.

The marque will be represented by two M6 GT3s in the series, which comprises the major races at Bathurst, Laguna Seca, Spa, Suzuka and Kyalami.

Walkenhorst Motorsport, which won the Spa 24 Hours this year, will run one of the cars, while the second will be operated by another yet-to-be-announced team.

Farfus and Tomczyk will drive for the second, unnamed team.

BMW has also confirmed Beitske Visser and Bruno Spengler as its Formula E reserve and test drivers. Visser had already been announced in its line-up for the in-season Ad Diriyah test later this month.

Its five remaining 2018 DTM drivers have all been retained for next season, with BMW saying Farfus's replacement would be announced after next week's rookie test.