Mercedes led the Spa 24 Hours after six hours with the Auto Sport Promotion line-up of Raffaele Marciello, Felipe Fraga and Timur Boguslavskiy at the six-hour mark

The French team's Mercedes-AMG GT3 moved back to the top of the leaderboard with Fraga at the wheel just over 20 minutes before the first cut-off at which points are scored in the GT World Challenge Europe Endurance Cup blue riband.

The Brazilian moved past the FFF Racing Team Lamborghini Hurcan GT3 Evo of Andrea Caldarelli to re-take a lead that the ASP Merc had held in pole-winner Marciello's hand through the opening two hours.

Fraga had eked out a lead of just over a second before the race was neutralised first with a full course yellow and then a safety car as the top of the hour approached.

The Brazilian's lead in a car that Boguslavskiy had yet to drive stood at 0.85s in the safety car queue on six hours.

The ASP Merc had dropped to second after a slow second pitstop and then to fourth after losing more time when it came in for its next stop.

The Lambo in which Caldarelli is partnered by Dennis Lind and Marco Mapelli maintained the lead for three and a half hours, save for short periods during each pitstop cycle, before Fraga came past during a period of light rain.

Patrick Pilet moved up to third during the sixth hour in the best-placed of the factory-supported GPX Racing Porsche 911 GT3-Rs.

The Frenchman, who shares the car with fellow works drivers Matt Campbell and Mathieu Jaminet, was less than six seconds behind Fraga before the yellow flag period.

Nicklas Nielsen held fourth position in the AF Corse Ferrari 488 GT3 Evo he is racing together with James Calado and Alessandro Pier Guidi.

He moved ahead of the factory Attempto Audi R8 LMS shortly before six hours when Patric Niederhauser dropped a position in the car he shares with Frederic Vervisch and Mattia Drudi making a short fuel stop under the yellows.

The Emil Frey Lambo of Albert Costa, Franck Perera and Giacomo Altoe held sixth position when the first tranche of points were awarded.

The JAS-run works Honda NSX Evo of Dane Cameron, Renger van der Zande and Mario Farnbacher, which had qualified only 28th, was seventh after making steady progress up the leaderboard. 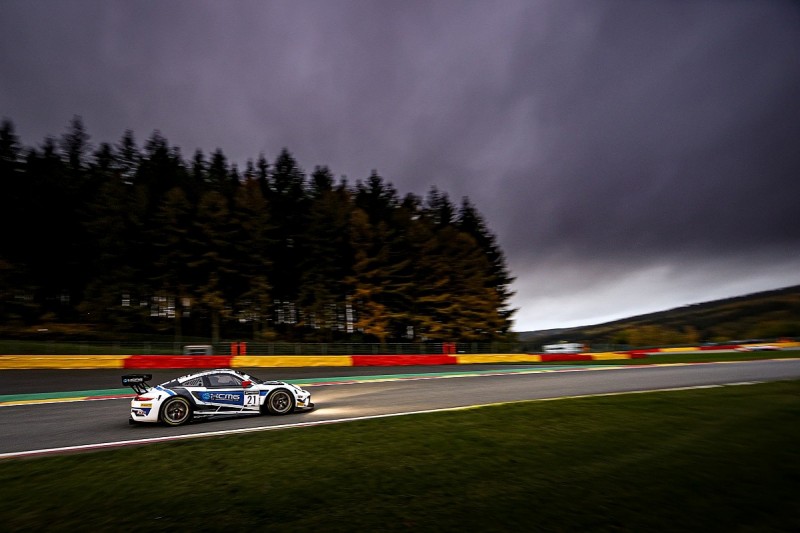 The car was firmly established in the top 10 before Estre propelled the car up the order in the third hour on a damp track.

Christensen was lying third late in the fifth hour when the car was given a drive-through penalty for multiple track limits violations and dropped to 12th.

The Rowe Racing Porsche of Earl Bamber, Nick Tandy and Laurens Vanthoor dropped from sixth to ninth when it stopped for fuel under the yellows.

The factory WRT Audi of Dries Vanthoor, Christopher Mies and Kelvin van der Linde retired with what the team described as a driveline problem shortly before six hours.

The car that qualified on the front row behind Marciello was running second to Caldarelli in van der Linde's hands when it took a drive-through penalty for track limits infringements early in the sixth hour.