Raffaele Marciello ended Friday's practice day running as the pacesetter at the Bathurst 12 Hour, putting the GruppeM Mercedes on top for a second time.

An action-packed first day included incidents that have already reduced the field by two cars, with British Touring Car champions Matt Neal and Gordon Shedden among those whose weekends are over.

Watch the Bathurst 12 Hour live and free on Motorsport.tv

The #540 Black Swan Porsche is out after Tim Pappas's fiery crash at The Chase just minutes into the morning's first open session, which left the 911 R with significant rear end damage.

Pappas was airlifted to hospital in Sydney for ongoing treatment, with Porsche later announcing that he had suffered fractures on his right arm and pelvis.

Team boss Chris Barber told Autosport that Pappas was "alert and awake and in a stable condition".

A spectator was caught on camera trying to extinguish the fire on Pappas's car.

The man appears to be first on the scene, wearing a shirt and shorts and brandishing a fire extinguisher at the back of the burning Porsche.

Posts on social media have suggested he jumped the fence and collected the extinguisher from a marshal post, but that's yet to be confirmed via any official channels.

Supercars Events said an investigation is taking place with the Confederation of Australian Motor Sport.

Also already out is the #3 Audi Sport entry of Britons Pete Storey, Shedden and Neal.

The car was damaged at The Chase in the early morning session dedicated to amateur drivers, and Sheldon has since tweeted that the team's Bathurst adventure is over.

In the day's fourth and fastest session, Maro Engel set the early pace in the #77 Craft-Bamboo Mercedes with a 2m04.938s, which lasted until the quarter hour mark when Christopher Haase took over with a 2m04.539s in the #2 Valvoline Audi that had headed the previous session. 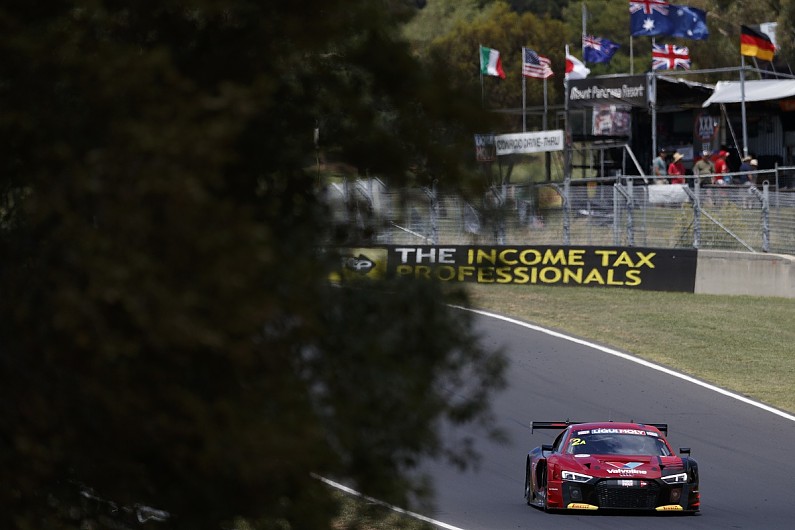 That kickstarted a flurry at the top, Engel responding immediately with a 2m04.225s, before Andy Soucek went even quicker with a 2m04.221s in the #108 M-Sport Bentley.

On the 20-minute mark Augusto Farfus became the first man under the 2m04s bracket for the weekend, the Brazilian setting a 2m03.801s in the #42 Schnitzer BMW.

Four minutes later Marciello closed in on Farfus with a 2m03.968s to go second fastest, before charging clear of the field with a 2m03.588s on his next run. The GruppeM car had also been fastest in practice two earlier in the day.

Marciello's time didn't come under any real threat as the session ticked into its final quarter, much of which was then soaked up by a red flag caused by David Crampton beaching his KTM at the last corner.

Kelvin van der Linde did get out for one more crack at Marciello's time at the flag, falling 0.04s short in the #22 Valvoline Audi.

The South African's late improvement knocked the Schnitzer BMW back to third, while Nick Foster's time in the #27 HubAuto Ferrari was good enough for fourth.

The Engel/Stolz/Gary Paffett Mercedes wound up fifth, ahead of the #108 Bentley, the #62 R-Sport Aston Martin and the #2 Valvoline Audi, which never improved on Haase's early time.

David Reynolds was ninth quickest and best of the Pro-Am cars in the #777 Erebus Mercedes, with the #107 M-Sport Bentley rounding out the top 10.

The #23 Team Carrera Cup Asia Porsche led the way in Class B, the #71 M Motorsport KTM in Class C, and the #20 MARC Cars entry in the Invitational class.