Shortly before the turn of the hour the #1 R8 LMS shared by Rene Rast, Markus Winkelhock, Christian Mamerow and Christopher Haase led by 30 seconds from the #30 Frikadelli 911 driven by Sabine Schmitz, Patrick Pilet, Jorg Bergmeister and Patrick Huisman, with the Team Schubert #19 BMW Z4 just over two minutes behind.

An unscheduled stop owing to a slow puncture then cost the Porsche a minute and a half and left it in the clutches of the #19 BMW.

The Marc VDS team's leading #26 car was also in the mix until 20 minutes before the turn of the hour, when it made a long pitstop as mechanics examined the front brakes.

The BMWs that led qualifying also headed the early running as Martin Tomczyk surged through from the second row in the #20 BMW to lead from polesitter Jorg Muller (#26) and Marco Werner (#19), with Andreas Simonsen's #2 Mercedes dropping back from second to fourth and then slipping further back over the course of the opening stint, ultimately overhauled by Lance David Arnold in the #84 Bentley.

The four much-fancied new R8s ran in formation behind the leaders during the first hour, and in the early stages it appeared that the BMWs and Audis, and the lead Bentley, enjoyed a pace advantage over their Mercedes and Porsche rivals in the SP9 GT3 class.

That quickly changed as a combination of on-track traffic and a congested pitlane during the pitstops shook up the order.

Those who were able to delay their stops by a lap at the end of the first stint tended to benefit, depending on how busy their area of the pitlane was.

There was an early scare for Darren Turner in the #007 Aston Martin when confusion in a yellow-flag zone at Brunnchen on lap three caused the field to slow abruptly and he had to swerve on to the grass to avoid being hit from behind.

Remarkably, only the #22 Rowe Racing Mercedes driven by Maro Engel sustained damage in the incident, losing the best part of a lap to repairs.

Changing weather is inevitable at the Nurburgring 24 Hours and the first rain fell in the second hour on the northeast of the track.

The Tomczyk/Hurtgen/Baumann/Klingmann Team Schubert BMW was the first of the early frontrunners to hit serious trouble as Claudia Hurtgen skidded off the slippery track after jumping a crest at Pflantzgarten. The right-front was heavily damaged and it had to go to the garage for repairs.

Bentley's ambitions also took a knock in the second hour as Guy Smith went off-track at Quiddelbacher Hohe in the #85 Continental after contact with the #44 Porsche, and shortly afterwards the #84 car began emitting copious quantities of fluid from the rear, though it was able to continue.

By the end of the third hour six different manufacturers occupied the top six positions, separated by just over a minute, and the polesitting #26 BMW returned to the lead with an on-track pass on the #5 Mercedes at the exit of the grand prix loop.

Superior fuel economy enabled the #1 Audi and #30 Porsche to overhaul both in the fourth hour.

The fifth hour proved catastrophic for the 2013-winning Black Falcon squad as Adam Christodoulou shed a left-rear wheel at Klostertal in the #2 Mercedes while he had been fighting for third place with the #19 BMW, and the sister #5 car made a long stop in the pits that dropped it five minutes behind the leaders. 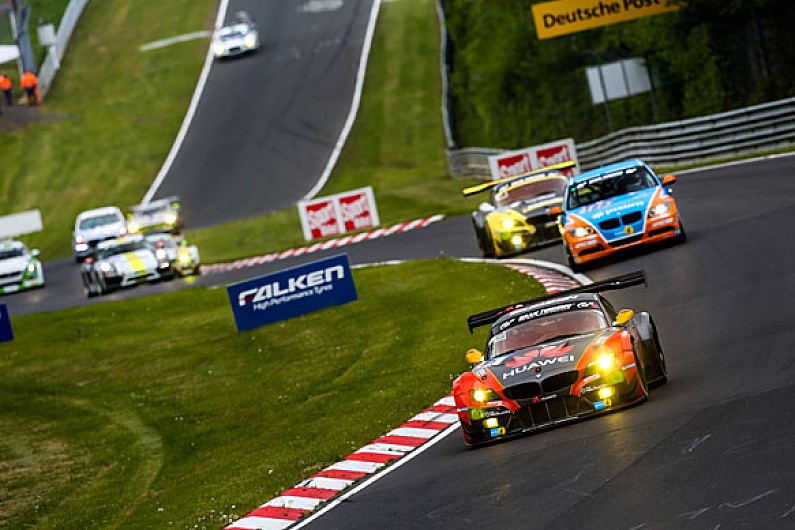