Vettel was left to represent Germany alone in Miami when fellow Formula 1 driver Wehrlein was forced to withdraw after his flip during Saturday's individual contest, which was won by Juan Pablo Montoya.

Vettel brushed aside his rivals in the group stages with ease, winning four out of his four heats, before dispatching Colombian duo Montoya and Gabby Chaves 2-0 in the semi-finals.

The perfect streak continued in the final, where the Busch brothers - representing 'USA Team NASCAR' - were both defeated by Vettel.

He beat Kurt by a healthy margin of 1.12 seconds in Ariel Atoms, then pipped Kyle by 0.44s when they moved to the Global Rallycross Championship Supercar Lites machines.

The result was Germany and Vettel's seventh RoC Nations Cup title, with Vettel and Michael Schumacher having previously won the event six times in succession from 2007-12. 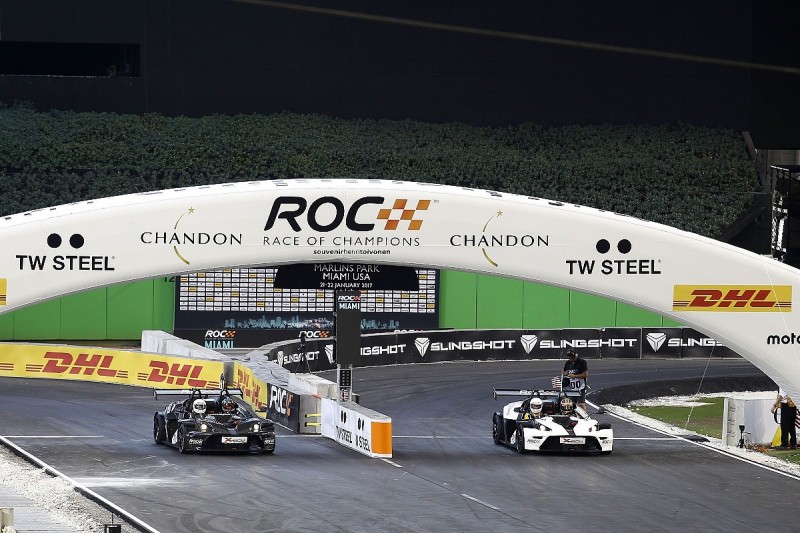 The Buschs' progress to the final at the expense of Ryan Hunter-Reay and Alexander Rossi's USA Team IndyCar pairing proved controversial.

The semi-final battle came down to a decider between Kurt Busch and Rossi in RoC Buggies, where the NASCAR racer appeared to jump the start.

"He jumped the start and admitted to it, but no penalty," said a visibly irritated Rossi as Busch was declared the winner.

A third USA team represented rallycross with Travis Pastrana and Scott Speed, but they failed to get beyond the group stages.

Also out at that point were individual contest runner-up Tom Kristensen and his Team Nordic partner Petter Solberg, plus British duo Jenson Button and David Coulthard.

Those two teams were dismissed by the unbeatable Vettel.

Both the IndyCar and NASCAR USA squads progressed from the larger Group A, where RoC Factor North America winner Stefan Rzadzinski impressed for Canada by winning two of his heats.

Canada didn't make it through to the semis, though, as a defeat to Pastrana for Rzadzinski's team-mate James Hinchcliffe in GRC Lites cars proved decisive.

Vettel wasn't the only driver left without a team-mate, with Helio Castroneves ending up solo for Team Latin America when RoC Factor graduate Gabriel Glusman withdrew after crashing in his first heat.

All three Group C teams ended up on two wins each, leading to a tie break where fastest combined lap times made the difference.

Colombian pair Montoya and Chaves had the edge there, ending the Nations Cup for Castroneves and Team Brazil's Felipe Massa and Tony Kanaan.

After the main event, a one-off Ryder Cup style 'America vs the World' contest was held to round the weekend off.

Comprising a series of head to heads between drivers from the USA and elsewhere, it was one by the 'world' group when Solberg beat Speed in the deciding race.