Conway and his manager Blundell will campaign the car originally built by Broadspeed and raced to the runner-up spot in the 1300cc class of the 1973 British Saloon Car Championship by Vince Woodman.

The Escort was acquired some years ago by Conway's father, construction magnate Michael Conway, and it has been restored by leading single-seater team Double R Racing, with which Conway Jr won the 2006 British Formula 3 Championship.

The plan is for the Escort to be raced in the Europe-wide Heritage Touring Cup.

"We're looking at doing some Peter Auto races where there's quite a mix of old touring cars, and Dad would also love to see it race at Goodwood," said Conway.

Double R boss Anthony 'Boyo' Hieatt explained that the car has been fitted with the two-litre Cosworth BDG version of what was initially a 1.3-litre BDH powerplant.

"To be competitive in Peter Auto, you need a two-litre," he said. "So we built it as that, but everything else that was period has been kept."

The bodywork went to ex-Formula Ford ace and Double R engineer Andy Stapley in Kent, and the modern rollcage built by Rhodri Williams at the Welsh-based Historic RallySport preparation firm of Mark Solloway.

The Escort then made a return to the track at Brands Hatch at the end of last month, in the hands of Conway and Blundell. 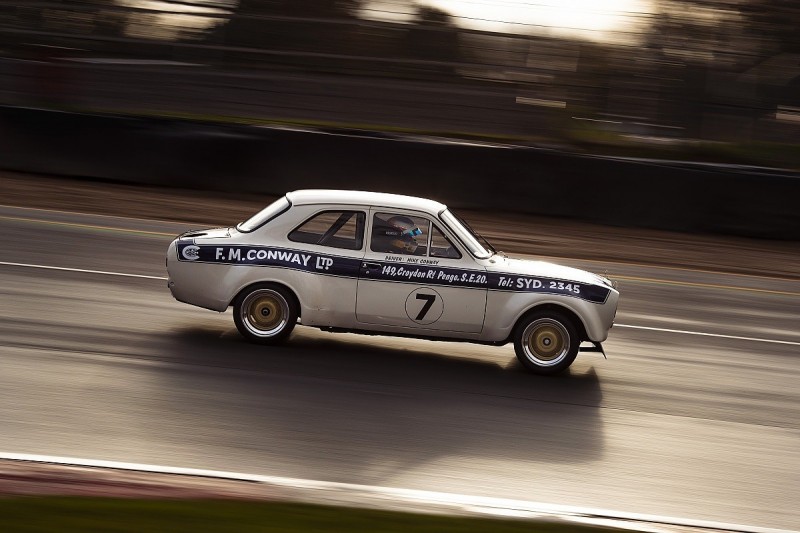 "To do something completely different has been a great challenge and interesting, and to see it running for the first time was quite emotional," said Hieatt.

"We had a few issues with brake balance and stuff, but it was a shakedown."

Conway added: "Dad loves his Fords and is really into cars of this era, and it looks bloody cool with its big arches and wide wheels.

"It was great to have a play in it, though we were on slicks on a wet track because we don't have any wets yet.

"It was a bit of a handful as you might imagine, so there's a bit of work to do on the set-up."

Conway Sr explained that he didn't originally intend for the car to make a return to racing.

"It was an idea that came up a few years ago," he said.

"I wanted to keep it in the garage and just look at it, but then Mike said he'd love to have a go in it and we thought why not get it ready to go out on the track.

"As far as we know, the car is pretty original. We've had guys who've looked at it when Vince was driving it and they say this is the car."